The Main Ingredient in Stardom

Coach Wooden and the most important player on the team. 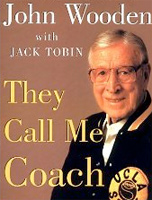 Those intense practices were to condition players for rugged game situations. So he built them around his "four laws of learning" — explanation, demonstration, repetition, and correction. He desperately wanted to win, but he wanted to deserve each win by outplaying the worthiest of opponents.

During a time when coaches appeared to develop the persona of madmen stalking the sidelines, Coach Wooden was self-possessed. When his peers began to scream loud profanities and to throw chairs onto arena floors, he kept his cool. While they bumped chests with officials and berated their players after bad plays, Wooden kept his jacket on and spoke to players in measured tones. They listened. And the Bruins racked up four perfect 30-win seasons and won a record 88 consecutive games from 1971 to 1974.

The 1960s and 1970s — when UCLA was winning 10 national titles over the course of 12 seasons — were a period of unprecedented individualism. The idea was abroad that nobody had the right to interfere with personal freedom — whether parents or professors or police.

One of Wooden's best-ever players, Bill Walton, was fully caught up in the spirit of his time. He came to practice after a break one semester with a bushy red beard. Walton knew his coach's rule was "no facial hair" on players.

"That's good, Bill," Coach Wooden responded. "I admire people who have strong beliefs and stick by them. We're going to miss you."

"... the rest of the team!"
The beard went. Walton stayed. The team won. And Walton's friendship with his coach was strong and abiding over the years. One of the few critical things Coach Wooden had to say about the hardwood game he loved was about the loss of "teamwork" to the sport.

"I don't like to watch [basketball] as much as I used to," he said after retiring from the game. "I think there's too much showmanship. There's too much individual play. The players are better now — individually. They're better players, but we used to have better teamwork."

The coach who reportedly never made more than $32,500 per year over those incredibly successful seasons knew teamwork was fundamental.

"The main ingredient of stardom," said Wooden, "is the rest of the team."

"The Main Ingredient in Stardom" by Rubel Shelly is licensed under a Creative Commons License. Heartlight encourages you to share this material with others in church bulletins, personal emails, and other non-commercial uses. Please see our Usage Guidelines for more information.