Let's turn this phrase on its ear! 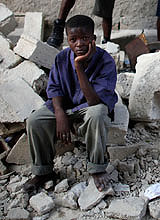 No, I don't think there is an un-godly conspiracy among lawyers and in the insurance industry. But, I do think it is unfortunate that the term "act of God" is used so uniformly in court and insurance documents to stand for hurricanes, fires, floods, and the like. God could use a good PR agent to rehab his image.

Don't you love the approach to all this the Salvation Army has taken? In its fund-raising activities for several recent projects — including the awful earthquake in Haiti — somebody came up with a great slogan ("We fight natural disasters with acts of God!") and appeal ("Combat a natural disaster with an act of God. Pray and act on behalf of the suffering people in Haiti!"). These good people always come early and stay late in these settings. Thank God for them!

Then there is the heartwarming story of Dan Woolley. He works with the Christian ministry we chose to help at our school. Compassion International has been at work helping children in Haiti for a long time, and Tony Campolo was on the campus of Rochester College recently to tell about work being done there.

Woolley works in Haiti to help oversee some efforts for children there, and he and a friend were in a hotel lobby in Port-au-Prince when the killer earthquake struck. His friend appears to have died and has not been found. Woolley was seriously injured but rescued after some 60 hours of being trapped in the rubble.

Knowing he might not see his family again, he wrote this note on a tablet stained with his blood: "I was in a big accident, an earthquake. Don't be upset at God. He always provides for his children even in hard times. I'm still praying that God will get me out, but he may not. But even so he will always take care of you."

Yes, terrible things have been done in the name of religion. You probably know some people who offer themselves as religious but who impress you as hypocrites. Churches can be racist clubs rather than centers for compassion. Having said all those things, however, the fact remains that the whole world of fair-minded people knows where to look for sustained help in times of crisis.

Step up with an authentic act of God.
The strongest defense of the Christian faith to this generation will not be an argument but a demonstration. In your own setting, be part of the effort.

In the face of disaster, grief, or pain, step up with an authentic act of God.

Editor's Note: Many of you know that we have partnered with Compassion International for several years and that I took a compassion trip to Uganda a couple of years ago. We would encourage you to think about helping Compassion at this critical time of ministry to Haiti to help rebuild their ministry infrastructure and care for children in the name of Jesus. To donate to Compassion Haiti relief click on the logo or go to:https://www.compassion.com/contribution/giving/disasterrelief.htm

"Act of God" by Rubel Shelly is licensed under a Creative Commons License. Heartlight encourages you to share this material with others in church bulletins, personal emails, and other non-commercial uses. Please see our Usage Guidelines for more information.

Compassion International children Haiti act of God do something