Nicos and Yosef Save Easter?

The real question is whether or not we will choose to follow Jesus from the cross, to the tomb, and into the new life that Jesus' resurrection brings? 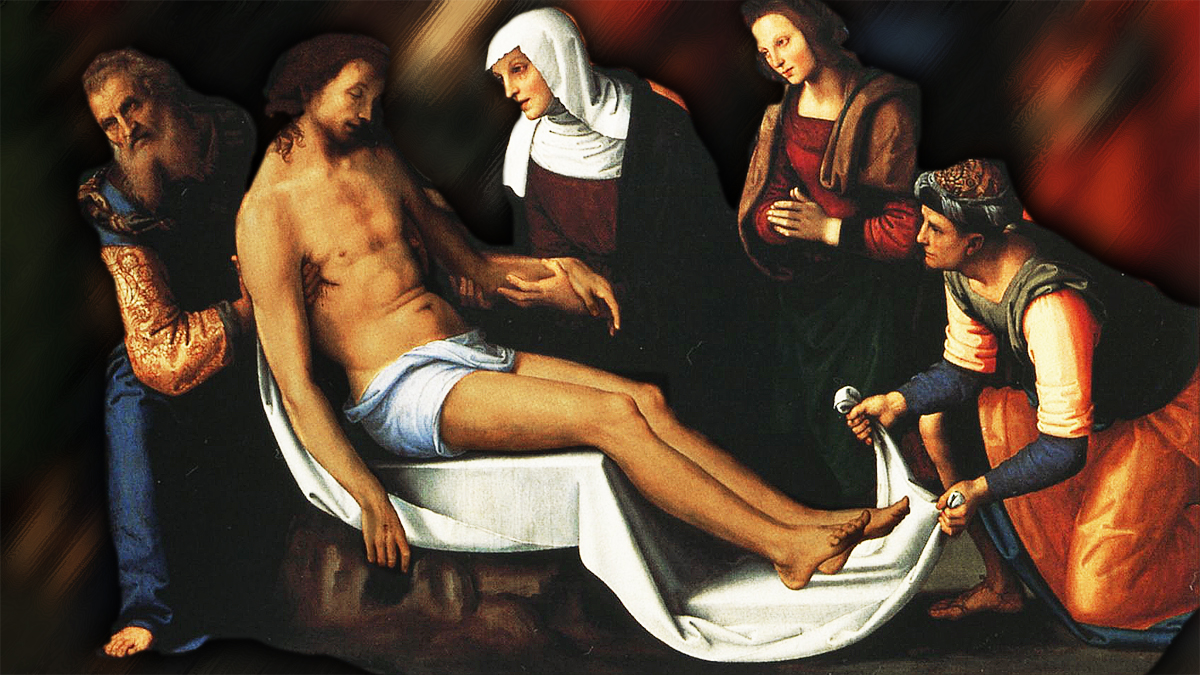 Let me now remind you, dear brothers and sisters, of the Good News I preached to you before. You welcomed it then, and you still stand firm in it. It is this Good News that saves you if you continue to believe the message I told you — unless, of course, you believed something that was never true in the first place. I passed on to you what was most important and what had also been passed on to me. Christ died for our sins, just as the Scriptures said. He was buried, and he was raised from the dead on the third day, just as the Scriptures said (1 Corinthians 15:1-4 NLT).

Nicos had heard a rumor that Annas and Caiphas were going to illegally call a secret night meeting of their closest allies among the priests, ruling council, and teachers of the law. It was to be held at the High Priest's palatial home, and it would be a mock trial to see if they could muster up enough evidence, real or contrived, to convict Jesus. Those in the High Priest's family and their allies were determined to find a reason to convict and kill Jesus (Mark 14:53).

Nicos had stopped this from happening earlier in Jesus' ministry, so he hoped the rumors of the clandestine meeting were not true! However, Nicos knew he would not be included in the illegal proceedings if they were true (John 7:50-51).

It no longer mattered that Nicos was a highly respected teacher, Pharisee, and leader in Israel. The other leaders in the Jewish ruling council suspected that Nicos was interested in Jesus and his teaching. They would hold their mock trial without any Jesus sympathizers nearby (John 3:1, 10, 7:52).

These leaders couldn't even wait for the official ruling of the whole ruling council. Their hatred was determined to spill over into violence, humiliation, and ridicule against Jesus. In their minds, this Galilean carpenter must die, and the more demeaning his death, the better as far as they were concerned. They would make sure Jesus was a mess before he appeared before the whole ruling council for the "real" trial (Mark 14:64-65). 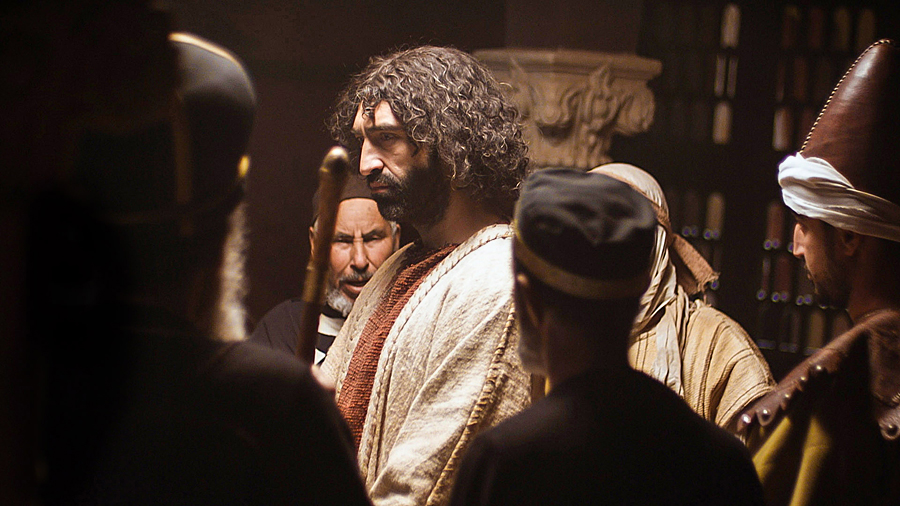 When the whole ruling council officially gathered early in the morning, there was a brutal determination to convict and execute Jesus. The proceedings did not take long before the ruling council sent Jesus to Pilate, begging for a guilty verdict (John 12:42; Mark 15:1)! Nicos and Yosef knew that there was too much momentum for the few fearful followers of Jesus in high places to derail the treacherous plans now in motion. 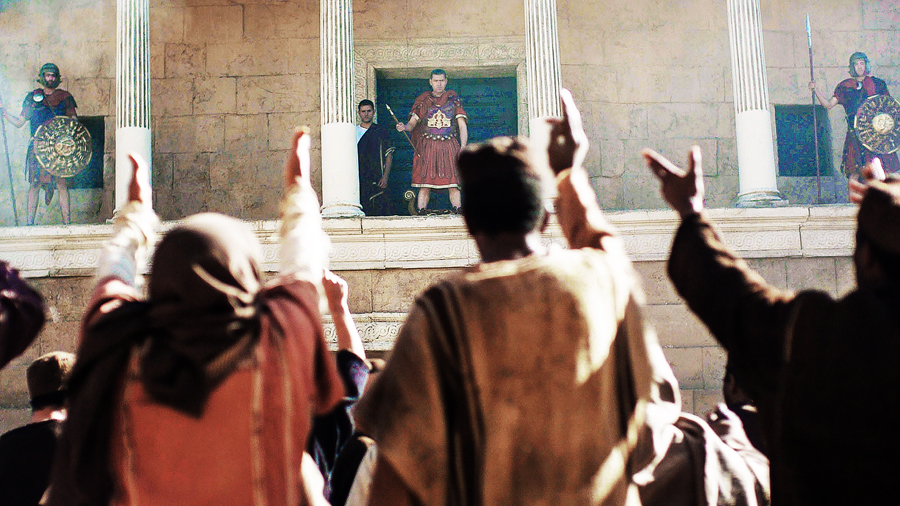 To Nicos' and Yosef's amazement, the High Priests and their conspirators convinced Pilate to let a murderous revolutionary named Barabbas go free. And as unthinkable and unconscionable as this was, their hatred and bloodlust didn't stop there (Mark 15:7, 10).

To their horror, Nicos and Yosef saw and heard the pain inflicted upon Jesus as Pilate had Jesus scourged. Neither could watch Jesus or look at each other as they heard the lashes of the scourge whistle through the air and the bits of broken pottery, bones, and lead fragments land against the back and tear the flesh of Jesus as the soldiers mocked and ridiculed Jesus (John 19:1-2). 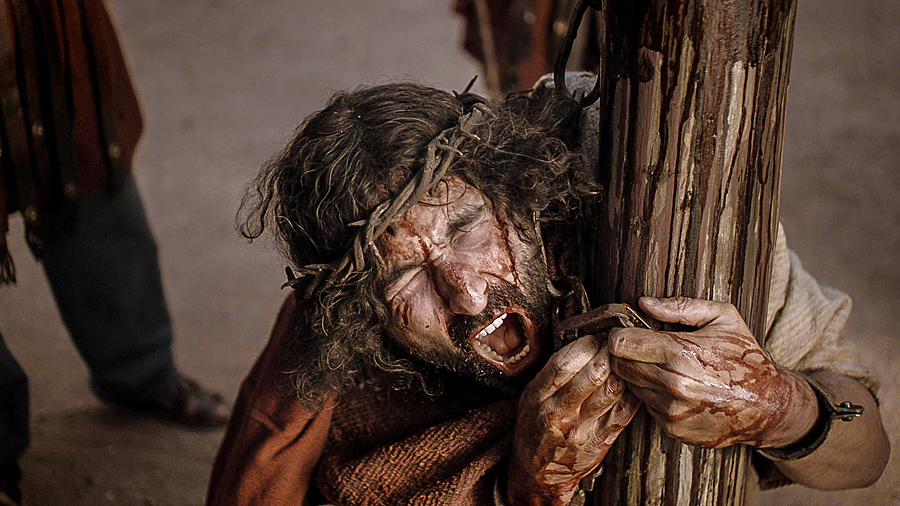 Something stirred inside Nicos's heart as the Holy Spirit brought back lines he had long ago memorized from Isaiah about the suffering servant of God. He was despised and rejected... a man of suffering, and familiar with grief... he took up our pain and bore our pain... and by his wounds we are healed (Isaiah 53:1-12). Realization slowly washed over Nicos as he watched Isaiah's prophetic words acted out with brutal ferocity by Roman soldiers as Jesus, God's Servant, offered himself for the failures of his followers and the silence of those too afraid to speak up for him — people like Nicos.

Maybe it was Isaiah's reference to the lamb, or it was the time the Passover lambs were being slain. Still, Nicos knew something was going on in this moment that was far bigger than the political maneuvering of Pilate and the jealousy of his fellow religious leaders (John 19:14).

Then, the reality of God's truth hit Nicos like a hammer blow. Nothing would satisfy this bloodthirsty crowd except Jesus' death on a Roman cross. "Away with him, crucify him," they angry crowd screamed (John 19:15). 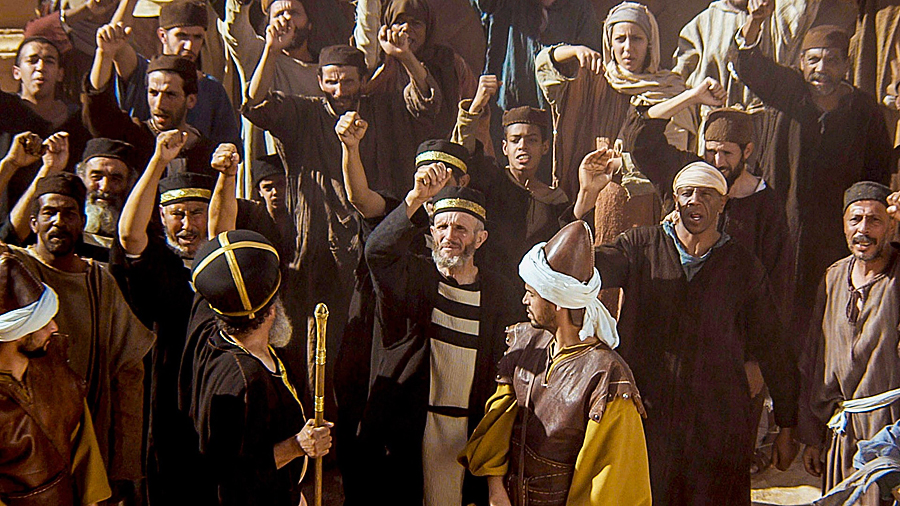 "Shall I crucify your King?" Nicos wasn't sure Pilate was asking or taunting. Pilate already knew their answer, but he let them scream it back: "Crucify him!" Ah, then came words Pilate never expected to hear from a Jew: "We have no other king but Caesar!" So, Pilate sent Jesus to die to please his Jewish critics and pacify the bloodthirsty mob.

Meanwhile, both Nicos and Yosef shuddered at what they knew must be ahead for the people because of the blasphemous words of the leading priests: "We have no king but Caesar!" They were certain that heaven must have shuddered, too (John 19:15-16).

Suddenly, Nicos's disorienting fog of fear and shock cleared. He remembered the words that Jesus spoke to him that night when they first met (John 3:2):

"Just as Moses lifted up the snake in the wilderness, so the Son of Man must be lifted up, t 15 that everyone who believes may have eternal life in him" (John 3:14-15).

Jesus had said he came from God as the promised Son of Man (John 3:13). He also said things Nicos didn't understand that long-ago evening. Cryptic things that a great teacher should have known or figured out with prayer and study (John 3:5-12).

Why would God allow this horror to happen?

Why would Jesus withhold his awesome power and might?

Why would the Messiah allow himself to be humiliated, abused, and murdered?

Then, Nicos remembered: For God so loved the world that he gave his one and only Son..." (John 3:16-17). He was seeing God's Messiah and God's love do the unthinkable. Redeeming love, sacrificial love, God's love, and the Savior's love were demonstrated through mock trials, brutality, horrors, and the cross. There was even love for the ones who were attacking him (Luke 23:34).

God was taking humanity's worst and turning it into heaven's grace — just as the Scriptures had promised. God was the worst darkness of the human heart while demonstrating the Savior's power to sacrifice to absorb and redeem it — to turn its darkness into light (John 1:5, 3:19). God was turning Jesus' torture and death into the world's salvation. A flicker of hope stirred in Nicos' heart as an unthinkable plan began to emerge: he would help bury the body of the crucified Jesus!

Here was God, demonstrating the drawing power of the cross and the redeeming power of the Savior's love (John 12:32). The Holy Spirit was making clear to Nicos that what he saw was not an accident; it was the plan of God, the fulfillment of prophecy, intended to redeem God's lost children. Because Jesus was willing to be the seed placed in the ground to die and await new life, so could he (John 12:28, 32-33)!

Nicos's once fearful and hidden faith was transformed into a burning passion in these moments of vicious hate and grueling agony. "I may not have honored Jesus in his life, but I will honor him in his death! I believe, O God, that Jesus is your Son. I don't know what the future holds, but I will hide in darkness no longer; I am coming into the light" (John 3:16-21, 12:46).

Something similar stirred in Yosef's heart, too! Somehow, during the agonizing ordeal of the Cross and Jesus' humiliating death, Yosef found Nicos. So, when Jesus breathed his last and died on that Cross, these two went to Pilate and boldly asked for permission to take the body of Jesus away for burial (John 19:38-39; Mark 15:43; Matthew 27:57). Without even thinking about it, these two once again fulfilled the prophecy about a rich man providing a place for God's servant to be buried after his death (Isaiah 53:9). And, they gave Jesus a burial fit for a King (John 19:39-41):

Nicos and Yosef, two once fearful but rich and respected men, who had been righteous but hidden followers of Jesus, suddenly become courageous believers. They decide to risk everything, step forward, get personally involved, and save Easter![NOTE] 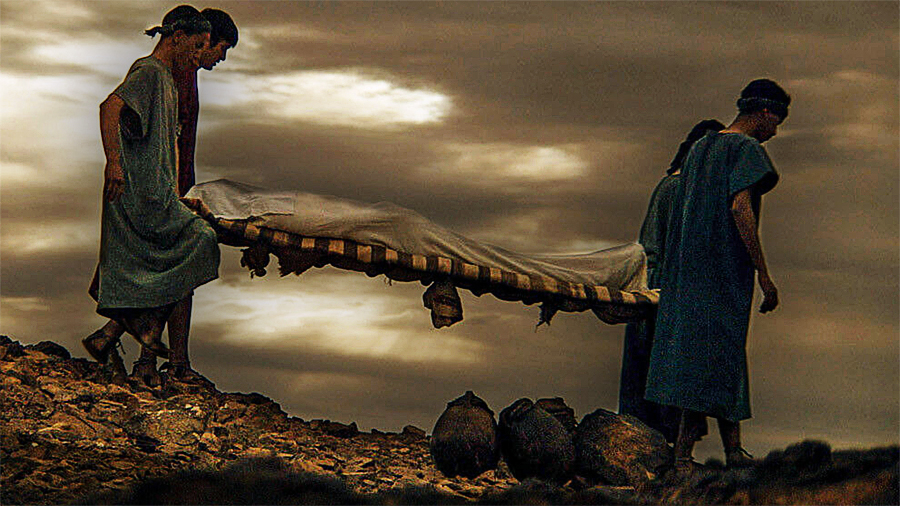 What? What? What does that mean? What are you talking about, saving Easter?

hey experienced Jesus' death as they cared for his battered, cold body so that God could resurrect hope.

Will we sit quietly by and let Jesus' death be an unspeakable tragedy that we hold at a distance, a death that makes no radical transformation or lasting impression on our lives?

Or, will we recognize God's plan, presence, and love in Jesus' death and also trust in Jesus' resurrection? Will we let Nicos and Yosef's examples challenge us to come out of the shadows of our own darkness and come into the light?

Don't you think it is time for us to:

Or have you forgotten that when we were joined with Christ Jesus in baptism, we joined him in his death? For we died and were buried with Christ by baptism. And just as Christ was raised from the dead by the glorious power of the Father, now we also may live new lives (Romans 6:3-4).

Yes, Nicos and Yosef saved resurrection Sunday. The real question is whether or not we will choose to follow Jesus from the cross, to the tomb, and into the new life that Jesus' resurrection brings?

The title image is adapted from Pietro Perugino's (14481523) painting of Nicodemus and Joseph of Arimathea coming to take the body of Jesus and bury him. The painting is entitled, Compianto sul Cristo morto. 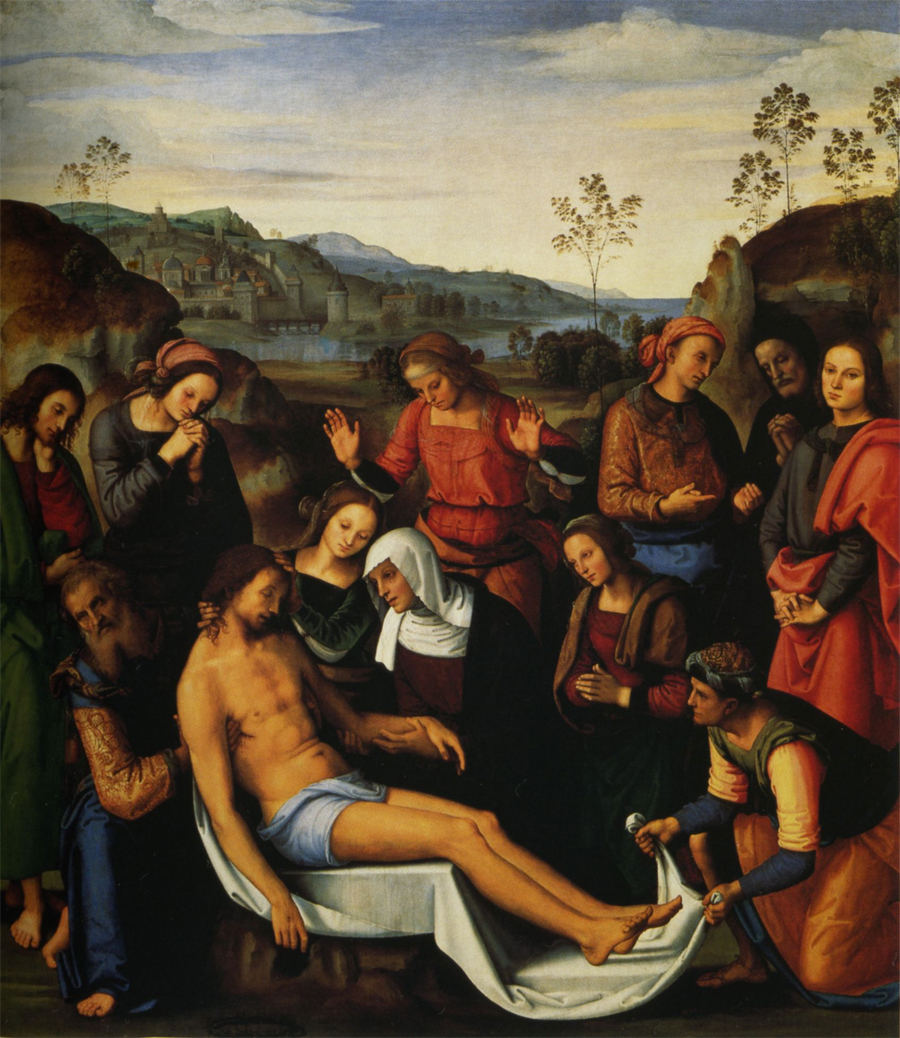 "Nicos and Yosef Save Easter?" by Phil Ware is licensed under a Creative Commons License. Heartlight encourages you to share this material with others in church bulletins, personal emails, and other non-commercial uses. Please see our Usage Guidelines for more information.