A Quarter of Remembrance

More than the decorations and gifts, this quarter makes Christmas special! 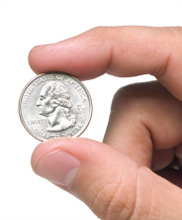 by Mike Cope (12/22/2009) | Together in His Grace
I actually got to meet Dr. Channing Barrett, though I don't remember the meeting because I was too young. But that doesn't change my picture of him as a young man walking a marathon of miles every weekend. In my mind, I see him returning home to Blissfield, Michigan around the turn of the century.

Channing Barrett was one of eight boys and was the first ever in the Barrett family to go to college. From his medical school, he walked twenty-five miles home each weekend, always returning a couple days later with clean clothes, a food packet, and a dollar. That dollar might have been a bill, but in my mind it was four quarters.

Dr. Barrett became one of the first ob-gyn's in Chicago, practicing at Cook County Hospital. He was known widely both for his innovative surgical techniques and for his ambidextrous skills that allowed him to change hands during long procedures.

There was no patient whom he wouldn't accept. He delivered many "tenement babies" for fifty cents and many babies for the wives of Mafia dons for a good bit more!

With a growing, respected medical practice, a wonderful wife, and three children, this young physician seemed to be living the idyllic life. He enjoyed riding horses and lifting weights, and was an early member of the Polar Bear Society—that "unique" group that takes to the chilly waters of Lake Michigan in January each year to prove — well, who knows what they're trying to prove?

And then World War I interrupted this Norman Rockwell life. Dr. Barrett left Chicago to run a field hospital in France, followed shortly by his 17-year-old son, who fought in the trenches.

As long as he could, Barrett sent money back to his wife and daughters. But by the last year of the war, his funds were nearly exhausted. He had no more to mail home. Mrs. Barrett sold most of what they owned, trying desperately to keep her daughters fed and clothed without having to lose their house.

By the time Christmas rolled around in 1918, there were no presents to place under the tree. They were lucky to have a place to live.

But Mrs. Barrett had managed, despite all the financial scrimping, to save two quarters. So on Christmas morning, when the girls emptied their stockings, under the paper dolls their mother had cut out for them and under a couple pieces of candy, they each found a coin.

Previous Christmas mornings had been more lavish, filled with frilly dresses and expensive toys. And there would be more such mornings in the future. But this was the Christmas the family would always remember.

In the future, even during the years of plenty, when the girls emptied their stockings, they always found — under the apples, oranges, nuts, and candy — a quarter.

It was a reminder — a reminder that some years are good while others aren't too good. Some years deliver new babies, promotions, raises, and great promises. Other years offer sickness, failure, death, and deep disappointment.

The quarter reminded them about both possibilities. It warned them not to write off all the pain of the past as if it didn't exist. It taught them that the sorrows and wounds of their lives had shaped their characters as much as their joys and accomplishments.

Anyone who takes seriously the Christmas stories of Scripture knows that the first Christmas had more than angels, shepherds, wise men, and a mother nursing her baby. There was also the anguish of childbirth. There were the pungent, impolite odors of an animal pen. There was an old man who held the baby and told his mother, "A sword will pierce your own soul too." There were the voices of many mothers screaming for their baby boys being slaughtered by a demented ruler named Herod. There was a breathless escape to Egypt.

The entrance of God's Son into the world meant peace — but it didn't assure that people would get along. It meant great joy — but it didn't mean we'd always get to grin. And it meant unconditional love — though it never implied that everyone would act lovingly.

And so one family, year after year, continued dropping a quarter of remembrance into the bottom of each child's stocking.

At least one of Channing Barrett's children picked up that tradition. Every year through the '30s, '40s, and '50s, her five children, Dr. Barrett's grandchildren, pulled their stockings off the chimney on Christmas morning to find quarters buried under fruit, nuts, and candy.

The quarter has mysteriously tied this family together — binding even generations who never met. Together they have remembered that bad year in 1918 and other bad years since.

It's the message of Christmas!

The quarter is a remembrance that the meaning of Christmas is deeper than our triumphs and sorrows. It is a joy that can't fully be expressed, a peace that passes understanding.

For years my children have followed this tradition started by their Great, Great Grandmother Barrett. Together, we've experienced the love of God, woven through the fabric of good days and dark days.

But never has the quarter meant more than today. Now we have one less stocking on the chimney in our home. The death of Megan, our ten-year-old daughter, has connected us to Matthew's Christmas story, the one that tells of "Rachel weeping for her children" (Matthew 2:17).

But by God's grace we will survive. We're still together, we still love, we still hope, we still believe in that one who was born in Bethlehem. That's the message of our quarter.

And even more, it's the message of Christmas!

This article actually ran over ten years ago, so we've included Mike's update on this powerful tradition on YouTube.

"A Quarter of Remembrance" by Mike Cope is licensed under a Creative Commons License. Heartlight encourages you to share this material with others in church bulletins, personal emails, and other non-commercial uses. Please see our Usage Guidelines for more information.

Mike is is intimately involved in New Wineskins magazine and Heartbeat, and his popular blog, Preacher Mike. (Visit the Author's Website)