What Difference Can One Make?

Can one person really make a difference 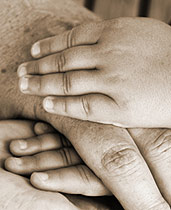 I'm just a nobody ... yes, that's the pigeon hole so many want to make me fit — just a little nobody, from nowhere, stuck in this place that's not my home.

It doesn't feel like any of my concerns matter to anyone. My opinion doesn't really matter. No one in high places cares about what is important to me. To be honest, nobody in low places really cares either.

People talk about their careers, their spouses, their homes, and their children. I'm not even sure how I'm supposed to join the conversation. I've lost everything that matters — home, husband, boys, country, and dignity. It's just too painful to even think about those things.

I would like to believe that my life matters — that God has a purpose for me in His grand scheme of things — but in the current moment and the painful mess of my life, it's just too hard to believe that could be true.

I've been told many times that I'm just bitter. I guess I've begun to believe it. In fact, I've told folks to just call me "Bitterness" — but my real name is Naomi and all I have left in my life is one daughter-in-law. Just Ruth. That's all I've got left ... just Ruth.

Naomi reminds us that a faithful woman can change everything! God made sure we could know this truth by providing a beautiful story He made into a book in the Bible. The story is not really about Naomi, but about her daughter-in-law. This daughter-in-law is named Ruth.

Naomi and her husband, Elimelek, were forced to leave their home and move to a foreign land because they could not feed their family during a severe famine in their homeland. In this foreign land, they had to speak a foreign language and live with people who worshiped false gods. Naomi and her husband along with their two sons, Mahlon and Kilion worked as migrant farmers. Over time, the two sons married foreign daughters. Then, Elimelek and his two sons died, leaving Naomi and her daughters-in-law, widows. Kinfolks bound together by grief and loss, but not much else.

In those times, widows, especially foreign widows, had no support. These three women were alone, destitute, and without hope. So Naomi set out to return home to the place she had left. She encouraged her daughters-in-law to return to their families, and one did. But the other, Ruth, spoke words of loyalty, faithfulness, and grace to Naomi:

But Ruth replied, "Don't urge me to leave you or to turn back from you. Where you go I will go, and where you stay I will stay. Your people will be my people and your God my God. Where you die I will die, and there I will be buried. May the LORD deal with me, be it ever so severely, if even death separates you and me" (Ruth 1:16-17 TNIV).

These two women, broken by life but tied to each other by love, returned to Naomi's home. And yes, Naomi was bitterness personified. She had lost her home, her husband, and her two boys. Her only real tie to life was Ruth, who now found herself in a foreign land. Because God required His people to care for the hungry, even if they were foreigners among them, Ruth was able to take care of Naomi. It was hard and dangerous work, but Ruth did it to provide for her mother-in-law.

Before long, Ruth's faithfulness and beauty caught the eye of godly man named Boaz, who made sure Ruth was provided ample opportunity to provide for Naomi and also made sure she was protected from those who might abuse her. Ruth was surprised by such grace and tenderness:

She asked him, "Why have I found such favor in your eyes that you notice me — a foreigner?"

Boaz replied, "I've been told all about what you have done for your mother-in-law since the death of your husband — how you left your father and mother and your homeland and came to live with a people you did not know before. May the LORD repay you for what you have done. May you be richly rewarded by the LORD, the God of Israel, under whose wings you have come to take refuge"

Naomi's bitterness began to sweeten as she saw God's hand at work in her life and in the faithfulness of Ruth. Ruth, through a bit of romantic scheming and faithful living, was admired by Boaz and ultimately became his wife:

"The LORD bless you, my daughter," he replied. "This kindness is greater than that which you showed earlier: You have not run after the younger men, whether rich or poor. And now, my daughter, don't be afraid. I will do for you all you ask. All the people of my town know that you are a woman of noble character (Ruth 3:10-11).

Then Naomi took the child in her arms and cared for him. The women living there said, "Naomi has a son!" And they named him Obed. He was the father of Jesse, the father of David (Ruth 4:16-17).

Yes, Naomi's great-great-grandson was the great King David. Something unimaginable when all of life was broken and she had lost everyone dear to her, except Ruth. And many years later, because of the faithful love of Ruth in times of her own unspeakable grief and hardship, God would send His Messiah, whom we know as Jesus (Matthew 1:5-6).

Does one person matter?

Does one woman's decision to be faithful when it looks like God has abandoned her really matter?

Can a poor wife of a foreign sharecropper who follows her bitter mother-in-law back to live in a foreign land make a difference?

What does this life-story teach us?
Go to a manger in Bethlehem and ask the shepherds and the angels; and they will tell you, "Yes!"

Go find a bunch of stargazers from Iran who traveled across a desert following a star looking for the King of the Jews, and they will tell you, "Yes!"

Go ask old Ms. Bitterness herself, a powerless widow named Naomi so broken by life and grief, and she will shout, "Yes!"

Go stand before the throne of mercy and grace, have the King of Kings wipe every tear from your eyes, and see the Lamb of God, and you, too, will shout, "Yes!"

LIFE Questions:
These are questions designed for you to discuss with others in a small group, house church, friendship circle, or share with our Heartlight.org community on the blog. I'd love to hear from you: http://thephilfiles.com — and on the blog, you will find a series of free, beautiful Scripture graphics that help you tell the story of Ruth in images.

Be sure and read the book of Ruth in preparation for the following discussion questions!

What strikes you most powerfully about the story of Naomi and Ruth?

What are your favorite verses in this life-story?

What would a woman in Naomi's position — a foreigner and impoverished widow who has lost her two sons and has no family in the land — have to face in ancient times?

What would she face today?

God demanded that his people not harvest the corners of their land or pick up anything they dropped when they harvested so the poor could come and pick it up. Why would this be important for Naomi and Ruth?

Why do you believe that God made sure this life-story, and this foreign woman who was so faithful (Ruth), was included both in a book in the Bible and also in the lineage of King David and also of Jesus?

What does this life-story teach us about not giving up in our grief, brokenness, despair, and bitterness?

What does this teach us about how we should feel about aliens and foreigners in our land?

What does this teach us about being faithful to those in our family even when they are difficult to get along with?

If you were to summarize the message of Ruth in one sentence, in terms of what God is saying to you in this life-story, what would it be?

"What Difference Can One Make?" by Phil Ware is licensed under a Creative Commons License. Heartlight encourages you to share this material with others in church bulletins, personal emails, and other non-commercial uses. Please see our Usage Guidelines for more information.