Maybe It Isn't Dead Yet

When is losing not such a big deal? 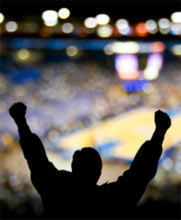 by Rubel Shelly (03/10/2009) | Leading in Hope
We still give lip-service to sportsmanship, but it is hard to believe we are very serious about it. Obscene salaries to professionals, grades without attending classes to collegians, drug parties by Olympians, late "confessions" by athletes caught using banned substances — all these combine to mock the idea that we really value teamwork, sacrifice, fair play, and honest competition.

Then you hear about a high school basketball game and think that maybe, just maybe, you are getting too cynical. Sportsmanship may not be dead yet. As told by Tim Dahlberg, national sports columnist for AP, here is what happened.

On a Saturday earlier this past month, when DeKalb (Ill.) High School was to play Milwaukee (Wisc.) Madison, tragedy struck the family of one of the players. The mother of Milwaukee Madison's senior captain died at a local hospital. While Johntell Franklin was taking his college ACT exam, his mother took a dramatic turn for the worse after five years of battling cancer. With her son at the hospital late that afternoon, the 39-year-old mother was removed from life support.

Thought was given to canceling the game, but Franklin urged the coach and his teammates to play. The game started late, and Milwaukee Madison dressed out only eight players. There may not have been a lot of heart or focus for them.

Early in the second quarter, Coach Womack saw his captain come into the gym to cheer on his teammates. He called a timeout, went over to give his grieving player a hug. So did his teammates and scores of their fans.

"We got back to playing the game, and I asked if he wanted to come and sit on the bench," Coach Womack said later. Came the reply: "No. I want to play!" Although it would mean a technical foul against his team in what was then a close game, Womack thought it was a price worth paying. So he had the young man suit up and prepare to play.

Since Johntell Franklin had not been on the pre-game roster, putting him in meant two free throws for DeKalb. When that was explained to DeKalb's Coach Dave Rohlman, he offered to forgo the free throws and let Franklin play. But five minutes or so of argument got nowhere with the refs.

Coach Rohlman huddled his team and explained what was going on. Then he asked for a volunteer to shoot the free throws. His team's captain, Darius McNeal, raised his hand. He went to the line. The first shot went about two feet and landed with a thud. The second just rolled out of his hand. The Milwaukee Madison players faced their opponent's bench and began applauding. It was only seconds before everyone else in the stands joined the cheering.

"I did it for the guy who lost his mom," McNeal told a reporter later. "It was the right thing to do."

"It was the right thing to do."
DeKalb eventually lost the game. Who cares? What those boys will recall for the rest of their lives is an act of sportsmanship they shared on that special night.

"Maybe It Isn't Dead Yet" by Rubel Shelly is licensed under a Creative Commons License. Heartlight encourages you to share this material with others in church bulletins, personal emails, and other non-commercial uses. Please see our Usage Guidelines for more information.