Do little gifts of remembrance actually mean a lot? 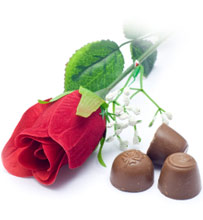 by Steve Brumfield (02/14/2009) | Just for Men
Okay, guys, stay with me here. I understand and am well aware that nobody wants advice, but would like to offer up some thoughts about my favorite holiday ... Valentines Day. I know, this is dangerous territory for guys, since many consider Valentine's Day to be a holiday created for women and by women. But my experience is a little different, but it really is my favorite holiday.

For a number of years, I would get my wife candy and flowers. Sue liked the candy. However, she did not like the cut roses. After all, they were cut — they were just dead flowers to her, plus they charge twice as much for the "dead ones" as they do for live ones. So about ten years prior to her death, I started doing silly things ... small things.

For about ten years, I had gotten Sue a stuffed singing something — most of these were simple stuffed animals that "sang" a classic song of some kind. One year it was a mouse dressed up in an evening gown with a little wig and microphone singing "Fever." Another year it was a Gorilla that sang "WILD THING." And on and on I had selected a new stuffed animal for each. It was challenging to come up with a new one each year, but fun at the same time. (Hint: I got most of these from Walgreen's.)

Sue liked some better than others; however, we saved them all. In February of 2007, I went to a Michael's crafts store in Cool Springs and got a bunch of stuff to decorate our mantle. I got all the singing stuffed things out from previous years and put them on the mantle — I was sneaking around the house to do this at 2 or 3 in the morning. Then, I put the latest addition, a dog that sang "I Can't Stop Loving You" beside the coffee pot and a note telling her to go in and play cut six on the CD, a John Denver song, "For You." I also got a white shoe polish pencil so I could write things on the mirror in the bathroom and over the window above the kitchen sink.

Guys, let's not take for granted the preciousness of the ones we love and remember them in simple ways that say, "I love you!"

"Remembering Valentine's Day" by Steve Brumfield is licensed under a Creative Commons License. Heartlight encourages you to share this material with others in church bulletins, personal emails, and other non-commercial uses. Please see our Usage Guidelines for more information.