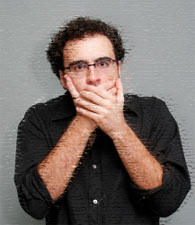 As Terry Mikel was speeding toward Tucson, he passed a car, an unmarked Arizona Highway Patrol car. The officer pulled Terry over. When Terry explained that he was late for a class he was teaching at the University of Arizona, the officer took pity on him and let him off with a warning. Before he went back to his car he said, "Slow down and drive safe."

Terry felt obligated to correct him. "Excuse me, Sir, but it should be 'Slow down and drive safely.' You said, 'Drive safe.'"

The officer walked back to his car and wrote him a $72 speeding ticket.

We can't do it, can we? We just can't seem to keep our mouths shut! Looking back, we know we shouldn't have said a word, but at the time we felt so compelled to speak.

Maybe you didn't get a ticket as a result, but you've done something just as foolish, haven't you? Maybe even this morning, before reading this message. Maybe even before leaving your house! James was so right when he wrote:

If anyone does not stumble in word, he is a perfect man, able also to bridle the whole body ... For every kind of beast and bird, of reptile and creature of the sea, is tamed and has been tamed by mankind. But no man can tame the tongue (James 3:2-8 NKJV).

That's not an excuse, incidentally, to let our tongues run wild. Rather, it's a challenge. As hard as it may be to control our tongues, it is essential that we as Christians strive to do just that. We stand to lose more than $72 if we fail to do so. As Solomon said:

That's not an excuse!
He who guards his mouth preserves his life, but he who opens wide his lips shall have destruction (Proverbs 13:3).

Lord, we truly want to use our tongues to Your glory this day. As difficult as it may be, help us to guard our mouths as we resist the temptation to speak at those times when we ought to keep quiet. In Jesus' name, amen.

We apologize for listing Tom Norvell as the author of yesterday's article, "Air Traffic Controller"

which was actually written by Mike Barres.

"Can't Keep Your Mouth Shut?" by Alan Smith is licensed under a Creative Commons License. Heartlight encourages you to share this material with others in church bulletins, personal emails, and other non-commercial uses. Please see our Usage Guidelines for more information.