Would you reach the mountaintop or help the wounded? 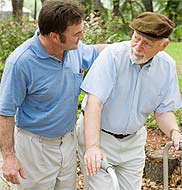 by Mike Barres (07/20/2008) | Leading in Hope
In 1953 Sir Edmund Hillary and Sherpa Tenzing Norgay climbed to the top of Mount Everest. Later, in May of 2006, mountaineers with dreams of reaching the summit passed a dying climber in order to fulfill their dreams. Sir Edmund Hillary was repeatedly asked what he would have done had he been there. He normally did not engage in controversy, but in the year before his death, he rebuked the climbers who had left the man to die. "I think the whole attitude towards climbing Mount Everest has become rather horrifying," Hillary said. "People just want to get to the top."

On August 31, 2007, when asked about the 2006 incident where climbers had to choose between realizing their dreams or saving the injured, Sir Edmund leaned forward with fire in his eyes and rasped, "Save the man!" (Quotes from article by David Mohan on Winning the Second Billion Together web site.)

Often in the church of today, we think of big crowds, a lot of excitement, and the expectation of a good show — a mountain top experience. Yet what is so simple, yet profound, is that the important part of this church equation must be the people — each person — that has come seeking Jesus.

If I had to state the core values of our church, they would simply be, Jesus, the Bible, and people. We know that we can't have this "attract the crowd" mentality alone. We have to think of individual people. We need to reach more people with the gospel of Jesus Christ. Statistics have proven over and over that most people come to Jesus because of personal contact with another believer. Someone cared enough to spend time with a person, talk about their faith in Christ, and invite them to church, an evangelistic event, or a Bible study about Jesus.

Then the master said to the servant, "Go out into the highways and hedges, and compel them to come in, that my house may be filled" (Luke 14:23 NKJV).

Jesus wants our lives to be about reaching people!
Paul warned the Corinthians "Come out from among them and be separate" (2 Corinthians 6:17). Some, however, have taken this too far. I have actually heard people say, "I don't spend time with anyone who isn't a Christian." If this is true, then you aren't going or making disciples (Matthew 28:19-20;  Luke 14:23)! Be sure your circle of friends has some who don't know the Lord. Have people that you are reaching out to with the love of Jesus.

What are you doing to reach and disciple another person? Jesus wants our lives to be about people, but this passion can't be general: it must be specific. Think about one person who doesn't know Jesus. Think about a person who is hurting, or alone. Think about one person who used to attend your church, but doesn't now. It's not just about crowds. It's not just about the mountain top experience. It's about "people" — one at a time, you and me reaching out to them in the name of Jesus with the grace of Jesus.

"People First" by Mike Barres is licensed under a Creative Commons License. Heartlight encourages you to share this material with others in church bulletins, personal emails, and other non-commercial uses. Please see our Usage Guidelines for more information.