At Just the Right Time!

What time is it in your life? 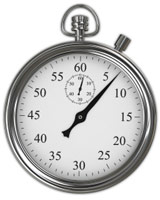 You see, at just the right time, when we were still powerless, Christ died for the ungodly (Romans 5:6 NIV).

You see, at just the right time when it appeared that life could not get any worse, when you felt hopeless and when you wanted to give up, God stepped in and did something amazing and unexpected.

A friend showed up.

An envelope appeared in your mailbox with the exact amount of money you needed for that bill. No name. Just money.

Someone you had not heard from in years called because for some strange reason you were on her mind.

Your husband realized he had made a terrible mistake and asked for another chance.

The contract was accepted.

The call came from your son ... he wants to come home.

The church you had visited started a ministry that reached out to you.

Was it a coincidence?
The urge to drink lessened.

The professor asked you to come by for a chat because he was concerned about you.

The doctor discovered a treatment he thought would work.

Did these things just happen? Was it a coincidence? Or, was God working to help you see that He cares and that He is working for good in your life ... even when you do not realize it. He wants you to see that He loves you. He wants you to know that He cares about you and is genuinely concerned about the day-to-day events in your life ... big and small. Not only is He concerned about you but, you see, He responds at just the right time. His timing is always right.

The guilt from your sins was so heavy that you wondered if you could be saved.

"You see, at just the right time, when we were still powerless, Christ died for the ungodly."

"At Just the Right Time!" by Tom Norvell is licensed under a Creative Commons License. Heartlight encourages you to share this material with others in church bulletins, personal emails, and other non-commercial uses. Please see our Usage Guidelines for more information.