How to Survive a Bear Attack

This is no joking matter when you are in the bear's woods! 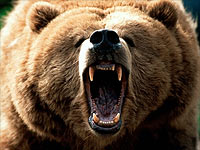 by Phil Ware (06/23/2008) | Two Minute Meditations
Many years ago, a letter to the editor in "TIME Magazine" shared something like this:

To survive a bear attack while hiking in bear country, hike with a friend. Make sure the friend is more overweight and out of shape than you. When you meet a bear, run like crazy. But you don't have to outrun the bear, you only have to outrun your pal.

At first glance, this is humorous. Unfortunately, however, we've all been that slower pal. It might not be a real bear in the woods, but sooner or later, most of us are bear bait — set up by an office rival, betrayed by a pretend friend, made the scapegoat in a prank turned bad, given the pink slip during downsizing, or betrayed by a marriage partner. Most of us will have to face a bear at some point in our life.

More than a decade ago, my wife and I visited Alaska for the first time in early October. Tourist season was over, a light dusting of snow was on the mountains, and the bears were getting ready for the winter. We were warned about bears and precautions to take to avoid them. Hikers in the city park just outside Anchorage carried rifles just in case they encountered a bear on the trail — a kind man encouraged us to walk with his family so he could protect us. We were not used to being prey in the food chain. We did notice, however, that every group we encountered on the trail had one person carrying a rifle.

The week before our arrival, a grandmother and grandson were hiking a familiar trail — clearly marked, heavily traveled, and just off the main highway. When they encountered a bear, the grandmother sent her grandson up a good tree. She took off running in front of the bear, knowing her actions would instinctively cause him to attack her and forget about her grandson. Several hours later, the boy was rescued from the tree. The grandmother was found mauled to death. The boy learned how to survive a bear attack: you hike with a grandmother who loves you more than she loves her own life!

We survive our bear attacks the same way.

We are never alone when this bear attacks. Jesus came to face the bear so we could go free. He was abandoned so we wouldn't have to face our bear alone!2 And guess what! He not only defeated the bear, but he lives with scars so we know we can survive one, too.

Since we share in flesh and blood, Jesus shared in our humanity so that by his death he might destroy him who holds the power of death — that is, the devil — and free those whose lives were held in slavery by their fear of death ... (Hebrews 2:14-15).

We are never alone when this bear attacks.

How has God revealed to you that he was with you during a trying time in your life?

How do you trust in the promises that you are never abandoned by God, even when all outward appearances seem to say that you are?

I'd love to hear from you on my blog:
http://thephilfiles.com

1 "He was pierced for our transgressions, he was crushed for our iniquities; the punishment that brought us peace was upon him, and by his wounds we are healed" (Isaiah 53:5). "He himself bore our sins in his body on the tree, so that we might die to sins and live for righteousness; by his wounds you have been healed" (1 Peter 2:24 NIV).

2 One of the most haunting verses in all the Bible occurs right after Jesus is arrested in the Garden of Gethsemane: Speaking of Jesus' disciples, we are told: "Then everyone deserted him and fled" (Mark 14:50).

"How to Survive a Bear Attack" by Phil Ware is licensed under a Creative Commons License. Heartlight encourages you to share this material with others in church bulletins, personal emails, and other non-commercial uses. Please see our Usage Guidelines for more information.