So when will what you have be enough to be happy? 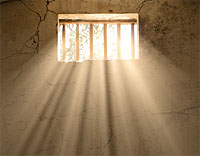 by Russ Lawson (06/12/2008) | Just for Men
I read a reference yesterday that mentioned Damocles. I had heard the name before but never read the story, so I looked it up. Are you familiar with it?

The story is told of Damocles, an excessively flattering courtier in the court of Dionysius II of Syracuse, a fourth century BC tyrant of Syracuse. He exclaimed that, as a great man of power and authority, Dionysius was truly fortunate. Dionysius offered to switch places with him for a day, so he could taste first hand that fortune. In the evening a banquet was held, where Damocles very much enjoyed being waited upon like a king. Only at the end of the meal did he look up and notice a sharpened sword hanging by a single piece of horsehair directly above his head. Immediately, he lost all taste for the fine foods and beautiful servers and asked leave of the tyrant, saying he no longer wanted to be so fortunate. (Wikipedia.com)

Most of us occasionally imagine ourselves living a different life. We may even fantasize about being born rich, living in a different place, a different country, having a different wife or husband. It may be that you've dreamed of having children that behave better or parents that love more. We may dream about what it would be like to have a body that functions perfectly or is our imagined perfect age instead of being disabled, old or even young. We might dream of having power to command or freedom from responsibility to do whatever our heart desires.

In the story of Damocles we see the lesson taught: that what we imagine to be the perfect life may have drawbacks or problems we never imagined (like a sword hanging over your head). What we desire or want badly may not be quite as desirable as we like to think it would be.

I may be dating myself, but I remember watching the television program "Star Trek" when it was first on television. There was one episode that has stayed with me for all of these years. In that episode the character Mr. Spock was forced to fight for the woman to whom he was engaged. He won, but then gave up the right to the woman. He turned to the man who now would be joined to this woman and said some words that tell a truth which most of us fail to realize until too late. These may not be exact, but the meaning is the same: "You may find that having is not as pleasing as wanting".

How many times in our lives have we wanted something so badly, only to be disappointed when we finally get whatever it was we wanted? Spock was right, "having very often is not as pleasing as wanting, or as we had imaged it to be."

How satisfied are you with your life?

How satisfied are you with your life?
The apostle Paul had this to say about it writing to a group of Christians who were concerned for his welfare. He wrote:

It is a great and truly Christian joy to me that after all this time you have shown such renewed interest in my welfare. I don't mean that you had forgotten me, but up till now you had no opportunity of expressing your concern. Nor do I mean that I have been in actual need, for I have learned to be content, whatever the circumstances may be. I know now how to live when things are difficult and I know how to live when things are prosperous. In general and in particular I have learned the secret of eating well or going hungry, of facing either plenty or poverty. I am ready for anything through the strength of the One who lives within me (Philippians 4:1-13 Philip's Translation).

So how are you doing? God still has a lot of work to do on me to get me to that point!

"Damocles, Spock, and Paul" by Russ Lawson is licensed under a Creative Commons License. Heartlight encourages you to share this material with others in church bulletins, personal emails, and other non-commercial uses. Please see our Usage Guidelines for more information.