Does our love have to be so irrational? 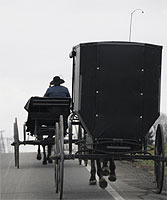 by Byron Ware (05/30/2008) | Together in His Grace
I have a daughter that is a graduating senior in high school, so I was excited when it was announced that my daughter's new youth minister, David Fraze, would speak on a recent Sunday.

David referenced an article by Diane Butler Bass who wrote, "The Amish Homeland Security Policy." This was about the killing of 5 children in 2006 in the Amish community and what the Amish community's reaction was to those murders.

Consider the Amish response to these murders, a response that fascinated the world. In the first week after the shootings the Amish families who had suffered such terror and loss responded in four ways:

Some Amish Elders visited Marie Roberts, the widow of the murderer, to offer forgiveness. The families of the slain girls invited the widow to their children's funerals. They requested all relief money intended for the Amish families be shared with Mrs. Roberts and her children. Dozens of Amish families attended the funeral of the killer.

The outside world was incredulous that such forgiveness could be offered so quickly for such a heinous crime. What a display of radical love and radical forgiveness!

Being in my church's marriage ministry, my thoughts naturally went to marriage relationships. I thought immediately about my own puny, micro-mini, capacity to forgive — especially compared to this amazing response.

What bothers me most is that we all should be living with radical love, radical forgiveness. Consider Jesus' own words:

So now I am giving you a new commandment: Love each other. Just as I have loved you, you should love each other. Your love for one another will prove to the world that you are my disciples (John 13:34-35 NIV).

This day, this week, prove to those all around you that you are following Christ's example of selfless love and forgiveness. Do it even if no one notices here on this earth, because Someone will.

"Radical Love, Radical Forgiveness" by Byron Ware is licensed under a Creative Commons License. Heartlight encourages you to share this material with others in church bulletins, personal emails, and other non-commercial uses. Please see our Usage Guidelines for more information.