Some Who Has Been There

Who is more super than Superman and yet doesn't possess his powers? 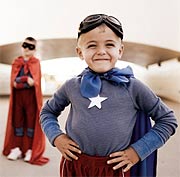 Therefore, since we have a great high priest who has gone through the heavens, Jesus the Son of God, let us hold firmly to the faith we profess. For we do not have a high priest who is unable to sympathize with our weaknesses, but we have one who has been tempted in every way, just as we are — yet was without sin. Let us then approach the throne of grace with confidence, so that we may receive mercy and find grace to help us in our time of need (Hebrews 4:14-16).

There was a time when Superman was one of my heroes. I watched his exploits on black-and-white TV. Even though George Reeves' build was a bit more like my Dad's than a superhero's, he was still my hero. I had typical little-boy fantasies of being like him.

He was faster than a speeding bullet, more powerful than a locomotive, and able to leap tall buildings in a single bound. But, those aren't the things that made him my hero. This was the clincher: Superman was the "Man of Steel."

Whether in black-and-white TV adventures or in later movie and animated episodes in brilliant color, the thing that amazed me about Superman was he couldn't be hurt. He'd fly in a window — or through a wall. Chains couldn't hold him. Bullets would bounce off his chest. I even remember one episode where they aimed a bazooka at him, and Superman just grinned.

The only thing he had to fear was ever-so-rare kryptonite. But there were only a few ounces of it anywhere on Planet Earth. And Lois Lane typically rescued him from its power to make him vulnerable and mortal.

Then it dawned on me. Superman — in addition to being fictional — isn't worth having as a hero. He's no ideal for someone like me. He isn't brave or daring or heroic. He doesn't have to defy suffering and stand up to fear. He just doesn't suffer. He doesn't get afraid. Therefore he can't really be brave.

Only such people are brave as can be seriously hurt. Bullets don't bounce off them. Gravity slings them to the ground — hard enough at times to break their bones. Their flesh will burn right off their bodies if they dash into a burning building to save their children. Their hearts will break when lied about or betrayed. And they feel pain from broken bones, charred flesh, or cancer.

I've changed my idea of a hero!
That's why I've changed my idea of a "hero." It is Mark dealing with leukemia. It is Don facing not one or two but three different kinds of cancer simultaneously. It is Jim and Judy facing down addictions — and reviving their marriage. It is John and Jaime dealing with the aftermath of a helicopter crash. It is Jenks and Hazel taking care of each other after sixty years of marriage. It is Myra's courage and grace through surgery and chemotherapy and radiation. It is ...

In a word, it is a long list of people I know who follow Jesus with such fierce devotion that they model faith like he showed in dealing with their fear, pain, and mortality. In the non-fictional world of real human experience, we have an authentic hero in Jesus. Put to the test in the same experiences humans still face, he endured. He trusted the Father. He stayed the course to save us.

Ever wish you didn't have to go through the ordeal of pain or betrayal or loss? Me, too! If that were the way of things, though, we'd be like Superman. Not brave. Just unfeeling, impervious, and incapable of pain. Fictional. A myth.

Made as you are, though, you can be like Jesus. Authentic. Trusting. Faithful. He has been there, and he provides mercy and grace in your time of need.

"Some Who Has Been There" by Rubel Shelly is licensed under a Creative Commons License. Heartlight encourages you to share this material with others in church bulletins, personal emails, and other non-commercial uses. Please see our Usage Guidelines for more information.