More than One Way to Hit a Homerun

When is a homerun not quite a homerun without some help? 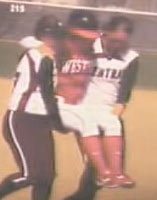 by Steve Higginbotham (05/23/2008) | Leading in Hope
You've probably already heard what happened recently when Central Washington and Western Oregon faced off against each other in a softball game — for video and other links, see the links list at the bottom of this article. At stake was a bid to the NCAA's Division II playoffs.

Western Oregon's, Sara Tucholsky came to the plate with two runners on base. Tucholsky was a lifetime .153 hitter and had never hit a homerun. However, things were about to change. She connected on a pitch and hit a three run homer! Due to her excitement, she missed first base. So she stopped and turned to go back to the base. But when she made the sudden stop and turn, she collapsed to the ground, having torn her ACL.

That's when things got interesting. Mallory Holtman and Liz Wallace, two players on the opposing team offered to carry her around the bases so that her homerun would not be counted as a single. So these two players gently picked up Tucholsky, and carried her around the bases, allowing her to tap each base along the way. After reaching home plate, these two girls handed Tucholsky off to her own teammates.

In other words, she was practicing the "Golden Rule" — "Do unto others as you would have them do unto you" (Matthew 7:12 paraphrased). Isn't it amazing how following the common principles of Jesus makes such an impact for good in our world? Open your eyes to the possibilities before you. You may not have the opportunity to carry someone around the bases; but if you look around at school or at your job, you will find things you can do that can have just as much impact on the lives of others.

"More than One Way to Hit a Homerun" by Steve Higginbotham is licensed under a Creative Commons License. Heartlight encourages you to share this material with others in church bulletins, personal emails, and other non-commercial uses. Please see our Usage Guidelines for more information.