I Don't Want Them to Change Me!

Why keep doing what you're doing? 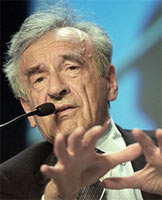 by Alan Smith (04/04/2008) | Timely Truths
Elie Wiesel was brought up in a closely knit Jewish community in Sighet, Transylvania (Romania). When he was fifteen years old, his family was herded aboard a train and deported by Nazis to the Auschwitz death camp. Wiesel's mother and younger sister died at Auschwitz — his two older sisters survived. Wiesel and his father were then taken to Buchenwald, where his father also perished. Wiesel has devoted his life to ensuring that the world does not forget the atrocities of the Nazis, and that they are not repeated. He tells this story:

A just man decided he must save humanity. So he chose a city, the most sinful of all cities. Then he studied. He learned all the art of moving people, changing minds, changing hearts. He came to a man and woman and said, "Don't forget that murder is not good, it is wrong." In the beginning, people gathered around him. It was so strange, somewhat like a circus. They gathered and they listened. He went on and on and on.

Days passed. Weeks passed. After a while, they stopped listening. After many years passed, a child stopped him and said, "What are you doing? Don't you see nobody is listening? Why do you continue shouting and shouting? Why?"

And the man answered the child, "I'll tell you why. In the beginning, I was convinced that if I were to shout loud enough, they would change. Now I know they won't change. But if I shout even louder, it's because I don't want them to change me."

We live in a world where there is a battle going on. I'm not talking about the conflict in Iraq or Afghanistan or Kenya. You may not even be aware that this battle is taking place, but I assure you that it is. It is a spiritual battle being waged between God and his people and Satan and his people (Ephesians 6:12). It is a battle for the control of the hearts and minds of men and women, including you and the people around you.

We sometimes use the word "evangelism" to describe our attempt to influence ungodly people in a way that will draw them to God, the God who created them and loves them. But, we sometimes forget that efforts — sometimes diligent efforts — are being made by ungodly forces to pull us away from God. Be assured of this: One of two things is happening, either you are having an influence on other people or other people are having an influence on you. It's a constant battle, much like a tug-of-war.

It's a constant battle.
And there are times, as in the story above, when we need to speak up or take some action, not so much to change others, but to prevent others from changing us.

I beseech you therefore, brethren, by the mercies of God, that you present your bodies a living sacrifice, holy, acceptable to God, which is your reasonable service. And do not be conformed to this world, but be transformed by the renewing of your mind, that you may prove what is that good and acceptable and perfect will of God (Romans 12:1-2 NKJV).

"I Don't Want Them to Change Me!" by Alan Smith is licensed under a Creative Commons License. Heartlight encourages you to share this material with others in church bulletins, personal emails, and other non-commercial uses. Please see our Usage Guidelines for more information.