It's About Seeing Us!

Do you see and listen to these folks around you? 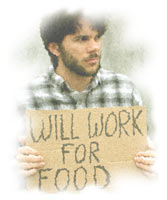 by Rubel Shelly (03/15/2007) | Special Features
Josh has shared a few stories with me about his friend Jack. He has come to call him "Professor" Jack. I can understand that venerable title, given some of the really important things Jack taught him.

Professor Jack is a homeless man in Detroit. In better days, he played in a band, owned a restaurant, and had a family. Addiction to drugs took all those things away from Jack. When Josh first met him, Jack was taking a meal from some church members whose hearts had been convicted about their need to help the poor. And he certainly qualified.

Jack began to be a tutor and coach to my young friend as the two just sat and talked. Josh can, in fact, tick off a catalog of things he learned from Jack. One of the most important lessons came early in the course.

As with first-rate teachers from Moses to Socrates to Jesus, Jack was open to questions. So Josh dared to ask him what good-intentioned people with charitable hearts could do that would really make a difference for the poor and homeless. "Make us feel real," he said. "We want to feel like we are real people. See us. Talk to us. Be with us. Help us feel. It isn't just about feeding us or giving us clothes. It's about seeing us."

Now there's a lesson that do-gooders like me need to learn! We know what Jesus taught about visiting the sick, feeding the hungry, and clothing the naked. And we know that faith without works is dead. So we send get-well cards or visit hospitals. We donate money and build soup kitchens. We drop off used clothing. All those are good things.

But what about personal awareness? What about communicating a person's worth? What about making her feel valued rather than pitied? And how do I let someone know he is a human being to me, not a project?

Professor Jack says it is as simple, direct, and difficult as making eye contact. Spending a little time in conversation. Asking an occasional question – and really taking what is said to heart.

Okay, so you're not the next Mother Teresa or someone who is going to give up your warm bed to live among street people in the dead of winter. Me either! But we can try to keep our giving and caring from becoming impersonal. We can actually be on-site occasionally. Give time as well as money. Have a conversation. Show some respect.

But what about personal awareness?
It would be a fitting tribute to Professor Jack. He died of an overdose in December. I'm glad he knew he had been seen before he died.

[Jesus said]
Give what you have to anyone who asks you for it; and when things are taken away from you, don't try to get them back. Do for others as you would like them to do for you.
"Do you think you deserve credit merely for loving those who love you? Even the sinners do that! And if you do good only to those who do good to you, is that so wonderful? Even sinners do that much! And if you lend money only to those who can repay you, what good is that? Even sinners will lend to their own kind for a full return.
Love your enemies! Do good to them! Lend to them! And don't be concerned that they might not repay. Then your reward from heaven will be very great, and you will truly be acting as children of the Most High, for he is kind to the unthankful and to those who are wicked. You must be compassionate, just as your Father is compassionate. (Luke 6:30-36 NLT)

"It's About Seeing Us!" by Rubel Shelly is licensed under a Creative Commons License. Heartlight encourages you to share this material with others in church bulletins, personal emails, and other non-commercial uses. Please see our Usage Guidelines for more information.