Let's cut through the fluff and deal with the real issue here! 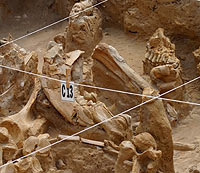 by Byron Ware (01/10/2007) | Together in His Grace
I received a new gift given to me from a couple in my last "Nearly Wed" class that I teach at church. It is the Far Side Calendar for 2007. The January 1st cartoon on the front seems to play on what many Americans want — the bottom-line answers, with no fluff. The caption reads, "The real reason dinosaurs became extinct." The picture is of a brontosaurus, a t-rex, and some other dinosaur hiding out behind a mountain and lighting up cigarettes.

Now, I don't know a lot about dinosaurs disappearing, but, after 8 years of working with marriages and relationships, I believe I know the real reason for most divorces and much unhappiness in marriage. Marriage "experts" will tell you the number one reason for divorce is money, unfaithfulness, or not meeting needs. I do believe that these are all factors. However, behind all of these issues is the real reason — selfishness.

Another thing that I have learned through the years is that the Devil wants to destroy our churches through broken marriages. The Devil destroys the effectiveness of our churches by working through selfish people. I believe one of the great scriptures that can help us understand how marriage and relationships really should work is in Philippians. The whole letter helps us better deal with the problems selfishness and rivalry cause in relationships, but one passage particularly stands out. "Do nothing from selfishness or empty conceit, but with humility of mind regard one another as more important than yourselves ... " (Philippians 2:3 NAS).

If you find yourself being selfish with money, your time, or helping the one you love — stop and remember your selfishness is motivated by the evil one. Also remember that love never asks how much must I do, but how much can I do? This love is motivated by the Lord! Listen to how Paul describes it to the Philippians!

The Devil destroys marriages by working through selfish people.

Your attitude should be the same that Christ Jesus had. Though he was God, he did not demand and cling to his rights as God. He made himself nothing; he took the humble position of a slave and appeared in human form. And in human form he obediently humbled himself even further by dying a criminal's death on a cross. Because of this, God raised him up to the heights of heaven and gave him a name that is above every other name, so that at the name of Jesus every knee will bow, in heaven and on earth and under the earth, and every tongue will confess that Jesus Christ is Lord, to the glory of God the Father. (Philippians 2:5-11 NLT)

"The Real Reason" by Byron Ware is licensed under a Creative Commons License. Heartlight encourages you to share this material with others in church bulletins, personal emails, and other non-commercial uses. Please see our Usage Guidelines for more information.