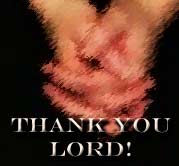 by Russ Lawson (11/25/2008) | Together in His Grace
I know that this is a difficult time of the year for some people. It seems that the subject of every conversation includes something about the Thanksgiving holiday.

It's difficult for some people, because they really don't feel that they have anything for which to be thankful.

For most it is a time of gathering and celebration with family, yet for some they have no family or perhaps they are separated by great distances from their family.

It may be that you have just lost a loved one — a spouse or a parent, your job or your investments and this holiday is not something to which you are looking forward to celebrating.

In fact, it may be difficult for you to try to find anything for which to be thankful.

Scottish minister Alexander Whyte was known for his uplifting prayers in the pulpit. He always found something for which to be grateful. One Sunday morning the weather was so gloomy that one church member thought to himself, "Certainly the preacher won't think of anything for which to thank the Lord on a wretched day like this." Much to his surprise, however, Whyte began by praying, "We thank Thee, O God, that it is not always like this" (Daily Bread, 1989).

Don't you wish that you could have that kind of spirit, that kind of faith? Wouldn't it be great if you had the kind of relationship to God that would allow you to look for the positive, to see the hope for the future and His power in the present? You see that's what it takes to be able to truly celebrate and give thanks not just at this holiday season, but also throughout all of the year.

Let me suggest that rather than dwelling upon all of the bad things in your life that you start offering the prayer of Alexander Whyte and say, "We thank Thee, O God, that it is not always like this!"

To say we were poor may be exaggerating, because even though sometimes we didn't know where the next meal was coming from or how we would pay the rent, we always managed.

Almost always we managed because of the kindness of others. I don't know how many times the mail would arrive and there would be two dollars stuck in an envelope by some friend back up in the North. Sometimes we might even get a five-dollar bill and we might get some special treat. We never asked for that money, yet it always came in just in time to save us from going hungry or to help pay some bill. Now two or five dollars may not sound like much to you, but to put things in perspective gas was selling for 23 cents a gallon and a pound of hamburger about the same.

We would never have been able to make it if it were not for the kindness of others. You learned the importance of friends and family as they came through with some unexpected help time and time again.

About a year after we moved to Texas my brother-in-law decided that he wanted to train for the ministry also. He and the family moved down to Lubbock and lived not far from us.

They were in the same financial boat as we were, so there were times we shared what little we had with one another.

One particular time has stuck with me for all of these years. It was near the end of the month, and both of our families had practically nothing. We got together, four adults and three children, to share what little we had — which I remember as one of us having 1/2 pound of hamburger and the other a box of oatmeal. We had nothing else to put with it other than some powdered eggs we had picked up somewhere and a quarter bottle of ketchup. It was all mixed together and put into the oven. When it came out, we put it on the table and offered thanks for what we had when others in the world had nothing. I remember very distinctly that "almost" meatloaf being so hard and dry that you could hardly eat it, but we did anyway. We didn't have any other choice.

It is a lesson in trusting God to provide.
I have thought of that meatloaf many times in the past 37 years. God has taken us all over the world, from the riches of America to the slums, ghettos and villages of Africa.

We have shared with some people who have a lot and some who have nothing, but they all have something in common. They all have love and are willing to share whatever it is they have. Although sometimes we might be a little hungrier than others, we always have had enough to sustain us.

The steps of the godly are directed by the LORD. He delights in their lives. Though they stumble, they will not fall, for the LORD holds them by the hand. Once I was young, and now I am old, yet I have never seen the godly forsaken, nor seen their children begging for bread (NLT).

By the way, the next day we got a letter in the mail with a five-dollar bill in it! As Paul said, "Rejoice in the Lord always, and again I say, Rejoice!"

"There's Always Almost Meatloaf" by Russ Lawson is licensed under a Creative Commons License. Heartlight encourages you to share this material with others in church bulletins, personal emails, and other non-commercial uses. Please see our Usage Guidelines for more information.