When's the last time you helped a lost person? 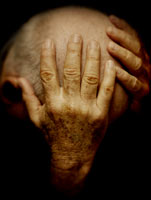 by Patrick D. Odum (08/02/2006) | Leading in Hope
This is what the Sovereign LORD says: "I myself will search for my sheep and look after them. As shepherds look after their scattered flocks when they are with them, so I will look after my sheep. I will rescue them from all the places where they were scattered on a day of clouds and darkness" (Ezekiel 34:11-12).

Late last month during the World Cup, police in Hanover, Germany were called in at 3 a.m. one morning to help with a rescue mission. That's about the time an American soccer fan stumbled into the police station to get help. He had spent the last six hours, he explained, wandering helplessly around the city, needing assistance and not being able to get it. At the end of his rope, he begged the police to help him.

After a soccer match, apparently, the man had found himself completely without a clue as to how to get back to his hotel. He remembered paying ten euros for a taxi ride to the center of the city, and he remembered passing a park and a Mercedes dealer. But by the time he entered the police station, he had come to understand that there are quite a few parks and at least as many Mercedes dealers in Hanover. He was thoroughly lost — no idea even which way to travel, no landmarks to guide him. But at least he finally had the sense to ask someone who knew the lay of the land for help.

It took the police about an hour to figure out what part of the city to look in, and shortly before dawn they had the wandering American back safe and sound in his hotel room.

Maybe you've been hopelessly lost before, and so you have some appreciation of this man's predicament. It's an unpleasant sensation, isn't it, when you realize that you don't recognize anything around you and that you have no idea which way to turn to get to your destination? Maybe asking directions helps, but it depends on who you ask, doesn't it? Maybe looking at a map will get you headed in the right direction, but only if you read it correctly. When you're lost, the best way of getting where you want to go is to have someone who knows the way take you.

The word "lost" implies helplessness, aimlessness, and vulnerability to danger. If someone is lost, he or she is exposed, without guidance. In a culture familiar with flocks and shepherds, the metaphor of the lost sheep was a natural one. It was defenseless against attacks, unable to avoid dangerous places or predators on its own. If it wandered away from pasture, it might die from hunger before it could find its way back. So it was appropriate that God would picture himself as a shepherd and people estranged from him as lost sheep. They were alone, unable to figure out on their own which way they should go, unable to defend themselves from danger or supply their own needs. And God, the faithful shepherd, goes to find these lost sheep. He watches over them, defends them from their enemies, finds them good pastureland, and takes care of the sick and injured.

Right after leading one of these lost people to safety, Jesus connects himself with God's mission to rescue those who have lost their way: "For the Son of Man came to seek out and to save the lost" (Luke 19:10 NRS). However else you might describe Jesus' work, you want to start with something like this. He came to look for those who are wandering aimlessly, with no sense of direction, and bring them to safety. Rescuing lost people was his mission, and he was faithful to it at the cost of his life. Not even a cross was too much to endure to bring lost men and women to safety.

I'm afraid that there are times when his church might lose sight of this priority. I have to admit that sometimes I hear "the lost" spoken of almost contemptuously, as if none of us has ever been estranged from God and wandering aimlessly and helplessly through life like a visitor to a strange city. We tend to think of "the lost" as the folks out there, away from God, and that God would love them if only they weren't so darned lost. Every now and then we blow the dust off Seeking the Lost and sing about pointing "Souls that are weak and hearts that are sore" to Jesus, but I'm not sure how much that sentiment really parallels what's going on in most of our lives. We sing about "Going afar, upon the mountain," but I don't know that in reality we even go across the street or across the hall or across the office.

The problem might be, though, that we simply don't have the compassion for lost people that Jesus has.

It would revolutionize the church!
Fact is, lost people do things that make Christians cringe sometimes. They say and do things as a matter of course that make us feel we have little in common with them, or that make us even want to actively avoid them. They tend to be careless about their language, or sexually immoral and irresponsible, or materialistic, or depressed, or angry, or whatever. But, of course, they act this way precisely because they are lost. If you and I were lost, we would do the same sorts of things. (For that matter, we often struggle with some of the same sorts of things anyway.) If someone from out of town asked you for directions, how surprised would you be if they didn't know that "The Kennedy" was a stretch of Interstate 90 and 94, or that "The Loop" was Chicago-speak for downtown? So why are we surprised when lost people act like, well, lost people?

It comes down to remembering that lost people are people just like us. They have the same struggles and fears and questions and wants and needs that we have. And they need Someone who knows the lay of the land to get them heading in the right direction.

And it just so happens that you and I know Someone.

"Lost" by Patrick D. Odum is licensed under a Creative Commons License. Heartlight encourages you to share this material with others in church bulletins, personal emails, and other non-commercial uses. Please see our Usage Guidelines for more information.