How Is Your Faith Resume?

What does your life story say about you? 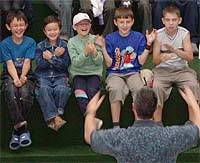 For many years, Dale arrived Sunday around 8 a.m. and put the children's classrooms in order, making sure that the attendance cards were properly distributed and that there was a pitcher of fresh water in each classroom.

He loved all the kids and they loved him. He really enjoyed "Messy Games Night." This meant that he might be seen with a big smile on his face, covered with whipped cream, mud, and candied lifesavers. He was also good at "Crazy Monkey" and made everyone laugh. Many children said that when they grew up, they wanted to be like Dale.

Dale was known for his creative, homemade cards. He personalized them and mailed them on a daily basis to the sick, to the needy, and to everyone for whom he was praying. He also made regular phone calls to encourage others.

After his uncle died, he called his aunt to cheer her up. When he got her answering machine, he left a message in song: "I just called to say, I Love You." She kept that message and still plays it on days when she's feeling blue.

In this "it's all about me" age, Dale was "all about everyone else." He had no theological credentials, but he understood faith and lived it in a profound and influential way. He didn't talk much about what he believed; he just lived like he knew God.

Dale passed away not long ago at the young age of 37. The church was packed with hundreds of people from all walks of life — people from various age groups, economic and educational levels, and races. The crowd was a testimony that Dale saw people with none of the world's traditional distinctions. He saw past the differences.

Dale was child-like, as the pastor said, "... a gentle soul with a generous heart." The minister also quoted a song from "South Pacific": You've got to be taught, before you are six or seven or eight, to hate." The pastor observed that Dale never learned to hate. He did not know hate or anger. He was never negative or bitter. He never thought about himself — only about others.

Dale worked in a cafeteria at the university, a place filled with people who are focused on building personal academic resumes. Just about every career ladder requires resumes of power and distinction. Dale didn't have much of a professional resume, but he had a powerful faith resume. He invested himself in people and encouragement and prayer and kindness.

Oh, did I mention that Dale had a child's mind in an adult's body? When he was 14 months old, he had a seizure and suffered oxygen deprivation. His parents found him limp and barely breathing. They rushed him to the emergency room where doctors fought to save his life. They did, but he was left with significant brain damage.

Dale reminds me of Jesus' words ... "unless you become like a little child ..." Dale may not have accomplished a great amount of adult stuff, but his faith resume is legendary.

How is your Faith Resume?

What have you done to make God look good?

Isn't that what a servant does, makes his master look good?

Choose a fellow believer you know well and make a list of his or her faith accomplishments. Write down your observations about the faith that lives inside him or her.

Once the list is completed, write a short explanation or description of each item on your list. Before you know it, you will have a faith resume for your friend.

Now at the right time, share your observations with your friend. I promise it will be a faith moment for both of you.

Wait till you have some uninterrupted alone moments and begin reflecting on your life. Make a list of your faith moments and thank God for each one.

Ask God to show you how to face life in a more child-like manner. He loves to build faith moments into the fabric of your life. Let him shape your resume.

"How Is Your Faith Resume?" by Ron Rose is licensed under a Creative Commons License. Heartlight encourages you to share this material with others in church bulletins, personal emails, and other non-commercial uses. Please see our Usage Guidelines for more information.