Can anything good come out of pain, stress, and hurt? 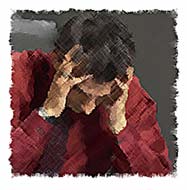 by Rubel Shelly (01/24/2006) | Special Features
Chances are good that you know the term "post-traumatic stress disorder" or simply "PTSD." It refers to the psychological, social, and biological distress that can debilitate people who have experienced life-threatening events.

Not only military combat but also natural disasters, terrorist incidents, or violent personal assaults such as being shot or raped can trigger post-traumatic stress disorder. There may be flashbacks and nightmares. Some have difficulty sleeping. Others are unable to function in social or family life. PTSD is real.

Contrary to popular opinion, though, most people who survive trauma do not develop chronic mental health problems, lose the ability to function, or find it impossible to negotiate family life. Research is finally being done into the two-thirds to three-fourths of people who don't develop PTSD from their suffering.

According to a recent story in the Washington Post, mental health experts are becoming increasingly interested in "post-traumatic growth." Some people emerge from severe life crises feeling enhanced rather than diminished. They speak of spiritual development, stronger personal relationships, greater personal strength, deeper appreciation of life, and clarity about priorities.

"We're talking about a positive change that comes about as a result of the struggle with something very difficult," Dr. Lawrence Calhoun of the University of North Carolina said. "It's not just some automatic outcome of a bad thing." To be sure, some people bring a fuller sense of security in life to a trauma. They have a better support system. They had already learned to rely more on God than self.

For two years now, I have watched Capt. John Paul Norman make his way back from a Cobra helicopter crash. Trapped in its flaming wreckage, he incurred third-degree burns over 35% of his body. Told he would never run again, he competed in five triathlons last summer. With two fingers amputated from his left hand, he is back in uniform now and serving his country. While he neither asked for his pain nor would he wish anything comparable on anyone else, it has taught him the meaning of life — and made him an inspiration to all of us who know him.

God created body, mind, and spirit to be marvelously resilient. Combat or crash, divorce or bankruptcy, cancer or loved one's death — each has the capacity to crush or dignify, disorient forever or reorient to the people and things that matter most. Since God gave us the capacity to overcome, I believe we are more likely to do so by consciously seeking him than by fleeing him in our confusion.

"A positive change that comes about as a result of the struggle."
Tragedy gives no quarter. God's grace withholds nothing a sufferer needs.

So let us come boldly to the throne of our gracious God. There we will receive his mercy, and we will find grace to help us when we need it. (Hebrews 4:15 RSV)

"Post-Traumatic Growth" by Rubel Shelly is licensed under a Creative Commons License. Heartlight encourages you to share this material with others in church bulletins, personal emails, and other non-commercial uses. Please see our Usage Guidelines for more information.