What's so awful about that? 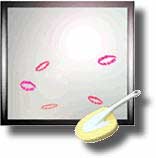 God gave Jesus to die for our sins, and he raised him to life, so that we would be made acceptable to God. (Romans 4:25 CEV)

The story is told of a principal of a small middle school who had a problem with a few of the older girls using lipstick. When applying it in the bathroom they would then press their lips to the mirror and leave lip prints.

Before it got out of hand he thought of a way to stop it. He gathered all the girls together that wore lipstick and told them he wanted to meet with them in the ladies' room at 2 pm. They gathered at 2 pm and found the principal and the school custodian waiting for them.

The principal explained that it was becoming a problem for the custodian to clean the mirror every night. He said he felt the ladies did not fully understand just how much of a problem it was and he wanted them to witness just how hard it was to clean.

The custodian then demonstrated. He took a long brush on a handle out of a box. He then dipped the brush in the nearest toilet, moved to the mirror and proceeded to remove the lipstick.

That was the last day the girls pressed their lips on the mirror!!!

I know ... that's disgusting!!!! But sometimes it takes something disgusting for us to recognize the seriousness of what we have done. Like my sins, for example. I'm often tempted to take them lightly — "They're not really so bad!" we tell ourselves.

Sometimes I need to be shocked.
Sometimes I need to be shocked by the realization of what happened on the cross because of my sin — the spit running down Jesus' face, the blood gushing out, the excruciating agony of spikes being driven into his flesh. It's not a pretty sight. In fact, it's disgusting! But it is in that disgusting sight that I find the strength to turn from the sin I'm lightly dismissing or may be contemplating.

The soldiers led Jesus inside the courtyard of the fortress and called together the rest of the troops. They put a purple robe on him, and on his head they placed a crown that they had made out of thorn branches. They made fun of Jesus and shouted, "Hey, you king of the Jews!" Then they beat him on the head with a stick. They spit on him and knelt down and pretended to worship him.
When the soldiers had finished making fun of Jesus, they took off the purple robe. They put his own clothes back on him and led him off to be nailed to a cross. (Mark 15:16-20 CEV)

"That's Disgusting" by Alan Smith is licensed under a Creative Commons License. Heartlight encourages you to share this material with others in church bulletins, personal emails, and other non-commercial uses. Please see our Usage Guidelines for more information.