Have you heard this heavenly song lately? 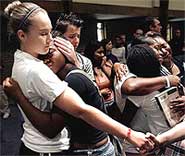 by Phil Ware (09/05/2005) | Two Minute Meditations
Like many of you, I finished last week emotionally exhausted and deeply disturbed. For many years, I have believed that a natural disaster could radically alter human circumstances in even the most arrogant and modern countries. However, I was shocked to see how three days of post-disaster aftermath and awful conditions could reduce a modern city to absolute chaos. Even more profoundly disturbing was the political positioning and finger-pointing while the poor, the weak, the old, and the sick became prey for thugs, disease, and despair.

I was heartened by the stories of people struggling heroically to help:

The list could go on and on about those whose work has saved thousands of lives. At the same time, I also know that many of these people providing such critical care have seen and experienced horrible things and are now at the end of their emotional ropes.

In the middle of this mess, a simple Friday night meal at the house of some friends brought incredible comfort and grace. We shared a dinner with about 20 students from Madagascar. Their President had sent them to Abilene Christian University as the cream of the crop of their nation. He wanted them to get a top flight education built on Christian values. I had two of these young people in my own class on Jesus the previous year. They've been attending church with us. They are precious and fun and bright and hopeful and appreciative. Most of all, they are very conscientious with the opportunity afforded them. Oh, they also love to sing!

Listening to these joyous young people sing songs of praise in Malagasy, French, and English was a gift of grace that my soul craved — they provided me with needed notes of grace. While their fellowship did not remove the suffering of hundreds of thousands of people, their singing reminded me of the true Source of grace and the real reason for hope. Deep in the human spirit is a yearning to know and be known by God. When our hearts are re-tuned to His notes of grace, something restorative and hopeful happens. This is why genuine worship does something profound that nothing else can quite match.

It is now late on Sunday evening, two nights later. Worship today was moving: not because it was technically great, but because we lost ourselves in our Father's mercy and the hurts of others that we can touch. Church today wasn't about us. Our church folks responded generously financially and with a deep desire to work for the next two years with people from the heart of New Orleans as they rebuild their lives and their church. We are now anticipating people from that sister congregation located in the heart of midtown New Orleans joining us for awhile to be part of our families. I know the Lord will be touched by the sweet sounds of His grace when He hears our version of His tune.

There is a refreshing grace that shines through!
My heart still hurts for the many evacuees ... only now that heart is also filled with assurance that God's people will respond with loving, generous, and holy kindness.

While there will always be many flaws in God's people and God's churches this side of Glory, there is a refreshing grace that shines through as we sing the songs of our heavenly home while wading through the muck of the moment to extend God's grace to those who need it most. May the words of our melody of grace always be the same even though the melody may differ each time the song is sung:

We don't go around preaching about ourselves; we preach Christ Jesus, the Lord. All we say about ourselves is that we are your servants because of what Jesus has done for us. For God, who said, "Let there be light in the darkness," has made us understand that this light is the brightness of the glory of God that is seen in the face of Jesus Christ. (2 Corinthians 4:5-6 NLT)

"Needed Notes of Grace" by Phil Ware is licensed under a Creative Commons License. Heartlight encourages you to share this material with others in church bulletins, personal emails, and other non-commercial uses. Please see our Usage Guidelines for more information.