What Are We Known For?

So how's your reputation as a Christian? 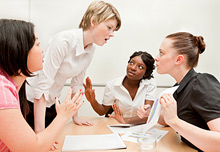 I asked a Buddhist friend, "What do Christians do that makes them stand out in a crowd?" The answer was short and simple, "They argue." I know, it sounds unfair, but it's an honest perspective from an outside observer. And, it's worth a little discussion.

I do sense an over-abundance of argument in our culture. In this season of heated political debate, argument seems to be everywhere.

The impact of negative ads, half-truth accusations, character assassination, and name-calling is pervasive. The people who jump to conclusions and speak judgment and condemnation get too much press and the aftermath lacks apologies or corrections. The goal is win. If you believe the USA news media, we have become a dismantling culture. We have taken adult bullying and name-calling to a whole new level.

I heard a local talk show host tease the listeners with his topics for the evening. He read through the list of news items followed by, "I don't agree with that..." I've listened to his show long enough to realize his vision of a talk show is a 3-hour-argument. It's all about being right, or being loud. He's not on my pre-set list any longer.

I'm looking for a talk show that explores values, listens to ideas, accepts differences in opinion, challenges me to think outside the box, and validates people in the process. Where is that talk show? You can have all the right answers and still be wrong. I'm tired of radio programed for argument. I want something more. I need something more.

As a follower of Jesus, I want my identity to be based on something different than anger. At the end of the day, I want to read books, visit websites, listen to music, and engage in media that leaves me a better person. I'm a Christian and I want to be known for the way I treat people, the way I listen and learn and dig deep into life. I want to find the good in people I talk with, even if I disagree with them. I want to be like Jesus, who could change the subject and heal the soul.

It's time for Christians in the USA to write a new story, to change the public narrative.

It's time to bury the argumentative ID and raise up a new one.

It's time to be known as listeners, as followers, as healers, and peacemakers.

It's time to invade the impossible.

I told my friend, "I want to change your perception of Christians. Please, I want to show you something different. Will you let me?"

Jesus predicted that Christians would be known by their love for people (John 13:35 NIV). I think it's time for that prediction to come true.

Only God's Spirit can do that. If we let Him, the Spirit will tear the labels off and eliminate our snap judgments. God will open our eyes to see beyond the distortions and struggles; He will show us the vulnerable human inside our own skin and the skin of those we don't really know yet.

Many of us have tried to do this on our own and it has proven to be a failure. On our own, our voice grows harsh and caustic and arrogant.

Then, after a while, God keeps His distance; can you blame him?

Ann was the substitute teacher in a second grade classroom This is her story:

I noticed one desk separate from the others, hidden beside a bookshelf. I peered around the corner and saw an eight-year-old girl resting her head against her arms.

I was surprised. Why was this student separated from the rest? Why was she hidden behind this bookshelf... alone? One of the students said, "Because she´s a trouble-maker, she doesn't do her schoolwork and fights with the boys at recess."

After excusing the children, I talked to the little girl. It took quite a while to soften her angry eyes and her rebellious attitude. But after a time, I had the young girl smiling. I moved the student´s desk up front beside my own so she could be near me. As the day wore on, I spent much of my time with this young girl, helping her, talking to her, having her pass out papers to the other students. By the end of the day, I had grown to love this youngster and my heart went out to her. Below the surface she was so difference than the label she had been given.

At the end of the day, I was supposed to write a note about the young girl´s behavior so she could give it to her parents. So I did. After all the students had gone, I packed up and walked out the door.

To my surprise, that little girl's mother walked up to me with the note in hand and asked, "Did you write this?"

Ask his Spirit to turn you into a seer of the good in others.
After acknowledging that I had, the young mother´s eyes welled up with tears as she said, "Her teacher has never written anything positive about my daughter. Thank you! Thank you!"

What are you known for? Are you a label maker? Do you freeze-frame people and refuse to let them grow, or become, or morph into a better version of the person you've labeled? Do you allow them to change? Or, do you look for behavior that justifies the label?

Are you really good at argument, but struggle with listening... really listening?

Are you trying to do God's job? How is that working for you?

Make a list of the people you know who wear a label you have created. Pray for God's forgiveness and ask His Spirit to take over. He is ready to work a miracle. Ask his Spirit to transform your heart, to turn you into a seer of the good and the "about to be good" in others.

And, they will know we are Christians by our love.

"What Are We Known For?" by Ron Rose is licensed under a Creative Commons License. Heartlight encourages you to share this material with others in church bulletins, personal emails, and other non-commercial uses. Please see our Usage Guidelines for more information.