What do you want your boy to be when you grow up? 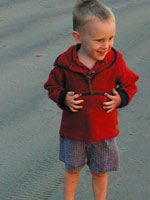 The father of godly children has cause for joy. What a pleasure it is to have a wise son. (Proverbs 23:24 NLT)

I've been blessed with three great kids, each one precious and unique. My son Josh is the middle kid, and he just turned 4. [Actually, at this date, Paul now has 4 children and Josh is several years older.] He's into the usual boy stuff — Batman, cowboys, cars, you name it.

Lately he's been talking a lot about "getting big" and growing up. A few weeks ago, he said, "Do you know what I want to be when I get big?"

I said, "No, son, what do you want to be?" I was expecting fireman, cowboy, astronaut, leader of the free world — something along those lines.

"When I get big, I'm going to be a daddy!" said my boy, with a gleam in his eye and a huge grin of excitement.

"When I get big, I'm going to be a daddy!"
I smiled and hugged him and complemented him on his choice. I felt a glow of satisfaction and pride to think that he wanted to be what he saw in his own daddy. Since that time, he's repeated his wish over and over, and I really think he means it.

As I've thought about it, I've realized that his attitude is what we need from our boys. It's great to want to be an astronaut or a baseball player, don't get me wrong. But wouldn't it be even better if an entire generation of boys got it into their heads that the BEST thing they could do, the highest thing they were called to, and their real source of satisfaction and accomplishment was to be a daddy? Not just a biological "father," but an encouraging, supportive, challenging, teaching, loving, committed "daddy"!

Whether they were rich or poor, they would first take care of their families. Whether they are a locksmith or a blacksmith, a vice president or a vice cop, they would realize their first job is to parent their children. Reading bedtime stories would replace reading the evening paper. Storytelling and games would replace the nightly swill on television. The next generation would know nothing but involved fathers who stick out the difficulties and stand by their families no matter what.

Hey, I still want my son to grow up to play second base for the Houston Astros, but even more, I want him to get his wish. That's what I pray to God to help me do every day, to raise up a boy who will become a man and a daddy.

"When I Get Big ..." by Paul Lee is licensed under a Creative Commons License. Heartlight encourages you to share this material with others in church bulletins, personal emails, and other non-commercial uses. Please see our Usage Guidelines for more information.

Paul Lee is the Co-Founder and former Editor of Heartlight.org. He is founder, director, designer, consultant, and chief problem-solver at Leeway Creative, a design, marketing, and SEO specialty web team. (Visit the Author's Website)