The X-odus Files: Wanderers or Warriors

So how do you impact culture? 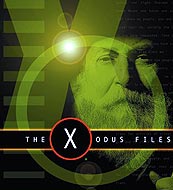 He has no address. But he does receive mail.

He has no phone. But he has a pharmacy that takes his calls.

He has no kitchen. But he has an array of restaurants that keep him well fed.

Mehran Karimi Nasseri is a wanderer. For sixteen years, he has wandered in and around Terminal 1 of Charles de Gaulle Airport in Paris.

Mehran was born in Iran, but ended up living in limbo. At one point in his life he was imprisoned for demonstrating and expelled from his country without a passport. In 1981, he received refugee credentials, but lost them when his briefcase was stolen in a Paris train station. In 1988 he turned up at the airport without a passport hoping to get on a flight to Britain. The officials stopped him, but had no country to which they could deport him.

Sixteen years later he is still in the airport.

If the story sounds familiar, perhaps you've seen "The Terminal", Steven Spielberg's movie about a man who lives one year in an airport terminal. Spielberg bought the rights to Mehran's story. It's the story of a man without a country who has learned how to cope in a place he doesn't belong. As Mehran says, "Here, it's not life. It's just staying like a passenger and waiting for departure."

Life in Egypt was much the same for the Hebrew people. Life was "not life" for the enslaved foreigners who were called habiru. Many believe habiru is the word Hebrew is derived from. It means people without a homeland. It was hurled at the people of God as an insult, an emotionally wounding put down meant to say, "You're just a nobody! Nothing but a bunch of worthless homeless moochers!"

But something happens between the time the habiru leave Egypt in the book of Exodus and enter the Promised Land in the book of Joshua. Between the crossing of the Red Sea and the crossing of the Jordan something has transpired. God has transformed the identity of his people. He has morphed them from slave wanderers to courageous warriors. He places some carefully designed steps in their way that take these ex-slaves from being a people who once could crank out bricks into a people who could wipe out seven nations at once.

God had a vision of his wanderers becoming warriors — people who were guided by his word.

God had a vision of his wanderers becoming warriors — people who would win battles and people who were not afraid of the sword.

He wants you to leave terminal living.
God had a vision of his wanderers becoming warriors — people who were hungry for the fight and people who were fully confident that when they stepped on enemy soil it would become theirs.

God wants the same for you. He desires to get you out of the holding pattern you've been stuck in. He wants you to leave terminal living.

It's time to quit hanging around the airport. It's time for your exodus.

From Rick and Reg: Current stats tell us that churches are not making a great impact on current culture. We "wander" through our roles when God intends us to be spiritual "warriors," aware of the battle that is going on around us. "The X-odus Files" is intended to help you on that journey of transformation.

The "X-odus Files" is available through Leafwood Publishers. Find out more!

"The X-odus Files: Wanderers or Warriors" by Rick Brown and Reg Cox is licensed under a Creative Commons License. Heartlight encourages you to share this material with others in church bulletins, personal emails, and other non-commercial uses. Please see our Usage Guidelines for more information.