What do you still lack? 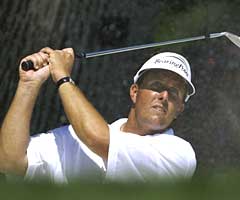 by Steve Higginbotham (04/24/2004) | Just for Men
Prior to last Sunday’s conclusion of The Master's golf championship, Phil Mickelson carried the heavy burden of being dubbed the "greatest golfer to never win a major."

I've always been a fan of Phil Mickelson. Since the time I saw him hit a shot out of a sand bunker backwards landing the ball on the green, he had a fan. Phil is, and has been, a great talent in the world of golf.

In the past 12 years, this husband and father of three has won 22 PGA tournaments and yet his name could not be mentioned without bringing up the fact that he had never won "a major" — one of the 4 major championships in golf that include The Masters, The British Open, The U.S. Open and the PGA. Phil has earned over $27 million dollars since turning pro in 1992, and yet he could not escape the questions about having never won "a major." Phil has been ranked as the sixth best golfer (and at times even higher) in the world, and yet when interviewed, the thing people want to know about is his never having won "a major."

However, all that changed a week ago last Sunday. Phil finally won "a major." Phil won his in dramatic, nail-biting fashion. Finally, the questions for him will stop. The feeling of relief must rival the level of joy and excitement that he is feeling right now. The stigma of being the "best golfer to never win a major" has been removed. In a sense, yesterday's Master's tournament was not just a win; it was freedom for Phil Mickelson.

No matter how good a person is; no matter how highly they are thought of, if that person is not a Christian, he hasn't had the stigma of "sinner" removed by God's grace and Jesus' sacrifice. No matter one's accomplishments in life, if he hasn't surrendered his life in obedience to Jesus, he stills lives in the land of "and yet." He can't escape the nagging stigma of being "a good person, and yet still a sinner."

Give it some thought ... and don't let the "and yet" hold you back.

*One of the best examples of a good person who was not a Christian and needed to surrender to Jesus and become a Christian was Cornelius, a good man who did good things. Read his story in  Acts 10,11.

"And Yet ..." by Steve Higginbotham is licensed under a Creative Commons License. Heartlight encourages you to share this material with others in church bulletins, personal emails, and other non-commercial uses. Please see our Usage Guidelines for more information.