The Heart and Soul of Success

An appreciation for those in the trenches ... 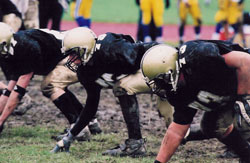 And they began to argue among themselves as to who would be the greatest in the coming Kingdom. Jesus told them, "In this world the kings and great men order their people around, and yet they are called 'friends of the people.' But among you, those who are the greatest should take the lowest rank, and the leader should be like a servant. Normally the master sits at the table and is served by his servants. But not here! For I am your servant. (Luke 22:24-27)

For years, the secret to success for the football teams that have won championships has largely gone unnoticed by everyone except those closest to the game. Occasionally, a commentator or coach will remind us that, "Today's winner will be determined by who wins the war in the trenches." What the commentator means by that comment is that the big guys whose numbers are in the 50's, 60's, and 70's will determine who wins the game. Usually these linemen go unnoticed unless they mess up and get a penalty or if they don't do their job and their opposing player makes a lot of big plays against them.

Imagine spending your whole career in a position where you only get recognized if you mess up or neglect your work! When you do your job well, someone else gets the glory and the bigger paycheck while you go largely unnoticed. Hmm ... that sounds more like most workers and not just about NFL linemen. It also sounds like church leaders and parents. It sounds like what Jesus refers to as servants.

In the spiritual world, however, two things are fundamentally different about servants in the Lord's Kingdom. First, even if no one notices, the Father does and he will not forget to reward his servants for what they do to bless others. He does not forget the kind deeds, the acts of service, the sacrifices made for his Kingdom, the care-giving offered to a chronically ill or infirm loved one, or the help given to someone who cannot repay you. Second, Jesus says that the greatest people in his Kingdom are servants. They are the ones who do the small, but essential tasks in the work of the Kingdom.

As part of the family of God, as participants in God's Kingdom, we are called to not only be servants, but to validate and encourage the ministry of servants in God's family. We need to notice these acts of kindness and affirm them. We need to pray and thank God for his servant-hearted children. We need to validate the high and lofty value of those who offer themselves to God and to us in the jobs that most folks don't notice unless they are done wrong or they are left undone. We need to show that the servants among us are valued by us just as much as they are by God.

We need to notice these acts of kindness and affirm them.
The guys in the trenches, the players who actually determine who wins or loses, are often only noticed when they mess up or when their job goes undone. While that may be true in NFL football, let's make a commitment to not let this be true of the servants among us. Let's show them that they are loved, admired, and valued.

As you know, all the Christians who came here from the province of Asia have deserted me; even Phygelus and Hermogenes are gone. May the Lord show special kindness to Onesiphorus and all his family because he often visited and encouraged me. He was never ashamed of me because I was in prison. When he came to Rome, he searched everywhere until he found me. May the Lord show him special kindness on the day of Christ's return. And you know how much he helped me at Ephesus. (2 Timothy 1:15-18)

"The Heart and Soul of Success" by Phil Ware is licensed under a Creative Commons License. Heartlight encourages you to share this material with others in church bulletins, personal emails, and other non-commercial uses. Please see our Usage Guidelines for more information.