Can we bend our regligion to fit our situation? 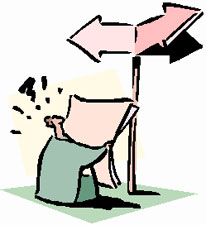 by Russ Lawson (01/13/2004) | Just for Men
You may or may not have heard the term, "Situation Ethics." It refers to doing whatever you feel is the right thing to do according to the situation you are in at the time. Those who practice situation ethics generally believe that there are no absolute rules concerning right or wrong — that you just have to kind of go with the flow of the times and determine what you do based upon those with whom you are with and the situation in which you find yourself.

This seems to be a growing theme in our society, so much so that it is beginning to creep into our churches and the lives of those who claim to be Christians. This is especially evident in the lives of our children and young people because they tend to follow the example of the adults they are around but are not as skilled at disguising this process. I heard an interesting story that illustrates what I am talking about.

A minister was visiting in the home of one of his members, enjoying a cup of coffee and some small talk. Suddenly the ten-year-old son burst through the back door carrying a big rat by the tail. "Don't worry, Mom," he said, "he's dead. First I hit him with a brick. Then I grabbed a two by four and hit him with that. Then I kicked him. Then I stomped on him. And then I ..." At that moment he spotted the minister and finished in a subdued voice,"... and then the Good Lord called him home to heaven."

I can relate to this story, because after being a minister for over 32 years I've had that kind of thing happen far too often. It's not unusual for someone to stop telling an off color story when I walk up, or for them to say some curse or swear words, and then say, "I'm sorry, I didn't see you standing there."

What kind of example is this setting? How consistent is our daily life with what God's Book teaches? Do we ever find it necessary to act differently around different people so as to be accepted? Could it be that we are practicing "Situational Religion"? What I mean is trying to be as much of a Christian as we need to be to be acceptable to whomever we happen to be with at the time?

God expects consistency in our lives as Christians. We are supposed to live changed lives and concentrate on pleasing God, not people. Notice what the apostle Paul wrote, "Don't you know that those who do wrong will have no share in the Kingdom of God? Don't fool yourselves. Those who indulge in sexual sin, who are idol worshipers, adulterers, male prostitutes, homosexuals, thieves, greedy people, drunkards, abusers, and swindlers. None of these will have a share in the Kingdom of God. There was a time when some of you were just like that, but now your sins have been washed away, and you have been set apart for God. You have been made right with God because of what the Lord Jesus Christ and the Spirit of our God have done for you." (1 Corinthians 6:9-11)

God expects us to live for him all of the time in every situation.
Wow! What a powerful proclamation of the need for Christians to live changed lives. Paul said, "There was a time when some of you were just like that, but now you have been set apart for God."

Some people believe that there are different rules for different places — one set of rules for home, one set for work, one set for our associations with friends and yet another for when we are with other Christians. Those folks are practicing situational religion and that is not acceptable to God. God expects us to live for him all of the time in every situation. If we are not doing that, then we are not serving him the way he wants.

My prayer is that each of us may have the strength to live daily as Christians and to pick up our cross "daily" and serve God with consistency and conviction.

"Situational Religion" by Russ Lawson is licensed under a Creative Commons License. Heartlight encourages you to share this material with others in church bulletins, personal emails, and other non-commercial uses. Please see our Usage Guidelines for more information.