With Jesus' arrest under torchlight, the end for darkness' reign drew near. 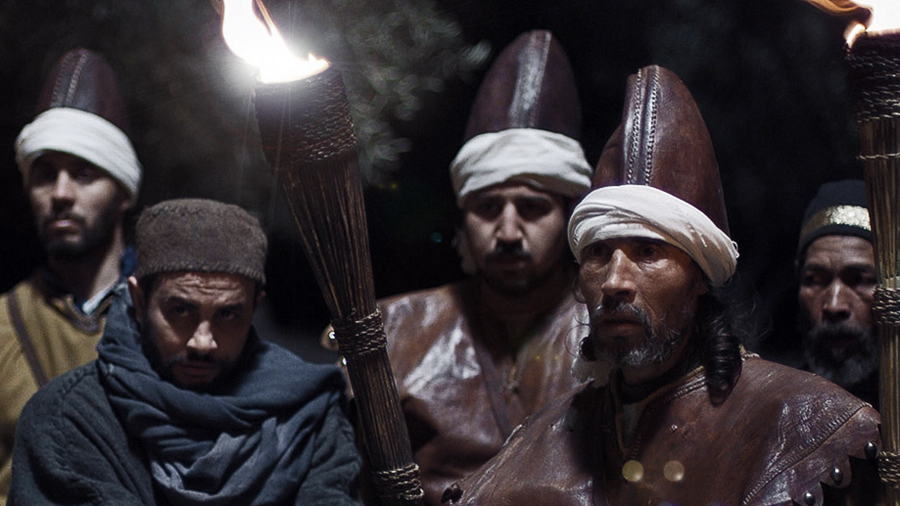 by Phil Ware (04/01/2020) | The Jesus Window
The four items of our focus — seed, towel, promise, and torchlight — seem so ordinary, so simple. These four items were part of the day-to-day world of Jesus. He often used the example of a seed in his teaching. A towel was part of the mandatory washing before meals in Jewish society. Promise was the currency of Jewish faith. Torchlight was all they had to drive the darkness away. Four common things from Jesus' world become four key witnesses to Jesus and his glory. Today, we look at Torchlight!

[After his time with his disciples in the upper room,] Jesus crossed the Kidron Valley with his disciples and entered a grove of olive trees. Judas, the betrayer, knew this place because Jesus had often gone there with his disciples. The leading priests and Pharisees had given Judas a contingent of Roman soldiers and Temple guards to accompany him. Now with blazing torches, lanterns, and weapons, they arrived at the olive grove.

Jesus fully realized all that was going to happen to him, so he stepped forward to meet them. “Who are you looking for?” he asked.

“Jesus the Nazarene,” they replied.

“I AM he,” Jesus said. (Judas, who betrayed him, was standing with them.) As Jesus said “I AM he,” they all drew back and fell to the ground! Once more he asked them, “Who are you looking for?”

And again they replied, “Jesus the Nazarene.”

“I told you that I AM he,” Jesus said. “And since I am the one you want, let these others go.” He did this to fulfill his own statement: “I did not lose a single one of those you have given me.”

Then Simon Peter drew a sword and slashed off the right ear of Malchus, the high priest’s slave. But Jesus said to Peter, “Put your sword back into its sheath. Shall I not drink from the cup of suffering the Father has given me?”

So the soldiers, their commanding officer, and the Temple guards arrested Jesus and tied him up

Four, simple, common things from Jesus' world should mean everything to us. We need to pause and listen long enough to their stories to know the power of the seed, the towel, the promise, and the torchlight. Jesus' journey toward his destiny in Jerusalem brings us to the last of these: torchlight.

To our modern sensibilities, torchlight feels primal and mysterious, even foreboding. On this night, torchlight was all of these and more. Evil flickered in its shadows. Betrayal rustled in the shuffling footsteps as the band of soldiers stomped its way into a quiet place of prayer in an olive grove. These unwanted invaders were led by Judas, one of Jesus' own. Yes, one of their own led hell's invasion of Jesus' place of prayer. 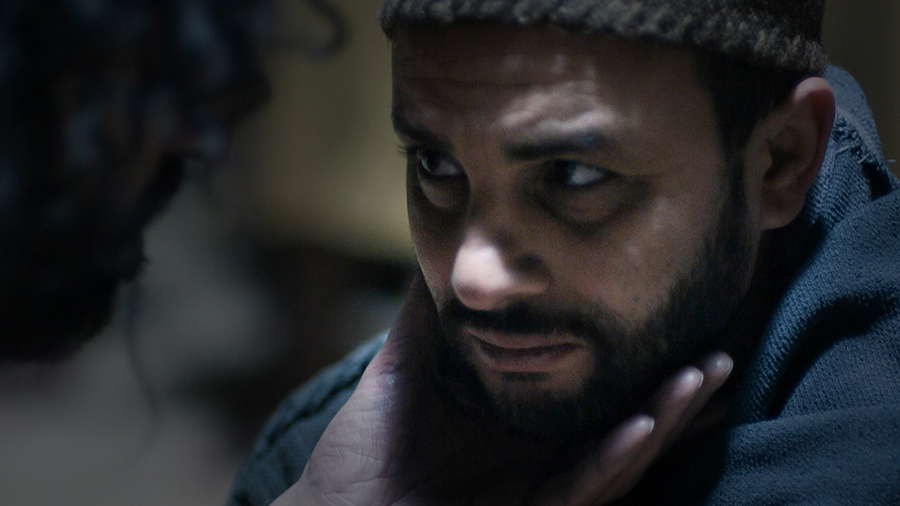 So much feels wrong, warped, and weird about this story lit only by torchlight. Soldiers interrupted Jesus in his place of prayer. Judas used the flickering torchlight and the cloak of darkness to misuse a symbol of love to sell out his Savior. Jesus' lead disciple even reached for a sword, then used it. Jesus wouldn't allow this violent action taken to protect him. He healed the injured man and warned his disciples against such violence. Without fear, he presented himself to those who came to arrest him. However, the soldiers in charge fell back in fear when Jesus offered himself for arrest by declaring himself, "I AM."[NOTE]

One thing, however, is consistent with the story of torchlight and its companion stories of the seed, the towel, and the promise. Despite Jesus' impending abandonment, torture, crucifixion, and death, his first thought was to protect and care for those he loved. "I am the one you want, let these others go!" he declared. Once the others, his beloved disciples, were safe, he offered himself to them to be bound and led away. Our torchlight story makes clear that he had the power to stop all of this, but that he chose not to do so for his beloved disciples, and for us.

As followers of Jesus, the cross Jesus chose redefines for us what God has always been about. God is about us... protecting us... saving us... giving himself up for us while only asking that we return his love. Even then, God gives us the choice to love or to reject him.

The seed, towel, promise, and torchlight are a quartet of stories that make clear our gut-level understanding of God's purpose in the cross. Hate, hell, and death have no power over the love of God. Demonic power seeks darkness. This time, however, darkness loses. The flickering shadows of the torches allowed evil to lurk in all the dark places around Jesus and in the hearts of those so intent on getting rid of him. But, John reminds us, darkness lost to Jesus and to the Light he came to be and to bring:

The Word [Jesus] gave life to everything that was created,
and his life brought light to everyone.
The light shines in the darkness,
and the darkness can never extinguish it (John 1:4-5).

Darkness lost when Jesus rose from the dead on the Sunday after his death. We believe that. But, torchlight reminds us of a more profound truth, an overwhelming defeat of darkness that we might miss. If we linger with the Lord and listen as he endures his Passion, we hear the song of God's love. As darkness enveloped his band of men and women on the night he was betrayed, Jesus demonstrated his love again and again. Jesus' actions — from the foot-washing to loving words of reassurance to his promises to them and on to his protection of them during his arrest — all remind us that God's love is stronger than death. Jesus' sacrificial love not only defeats, but also disarms the power of hell, making a public spectacle of the demons, evil intent, and the devil's plans in his cross (Colossians 2:15).

Hate, hell, and death have no power over the love of God.
Jesus had the power to overwhelm the soldiers and their meager power and their dim torchlight. Legions of angels were ready. The soldiers' falling back in fear with his simple, "I AM!" betrayed their powerlessness. Jesus' willingness to love his own above himself controlled the crowds, the soldiers, and politicians. Their abuses, scorn, and murder were no match for his love for his own — his love for us.

As we journey through the last days with the Lord in his Passion, our hearts will cringe. We will recoil at the abuse he suffered and the way he died. However, we must always remember: Jesus' love is in control of this story. He chose the cross. They could not force it upon him. He chose the thorns, the nails, and the scorn to protect his disciples — both those with him in the olive grove and those of us who love him still today. He chose to be arrested under torchlight to save them, and us, from human hate, hell's fury, and death's certainty that lurked in the shadows. He absorbed all the darkness of those shadows while the light of his love for us never dimmed. With Jesus' arrest under torchlight, the end for darkness' reign drew near.

When we were utterly helpless, Christ came at just the right time and died for us sinners. Now, most people would not be willing to die for an upright person, though someone might perhaps be willing to die for a person who is especially good. But God showed his great love for us by sending Christ to die for us while we were still sinners. And since we have been made right in God’s sight by the blood of Christ, he will certainly save us from God’s condemnation. For since our friendship with God was restored by the death of his Son while we were still his enemies, we will certainly be saved through the life of his Son. So now we can rejoice in our wonderful new relationship with God because our Lord Jesus Christ has made us friends of God (Romans 5:6-11). 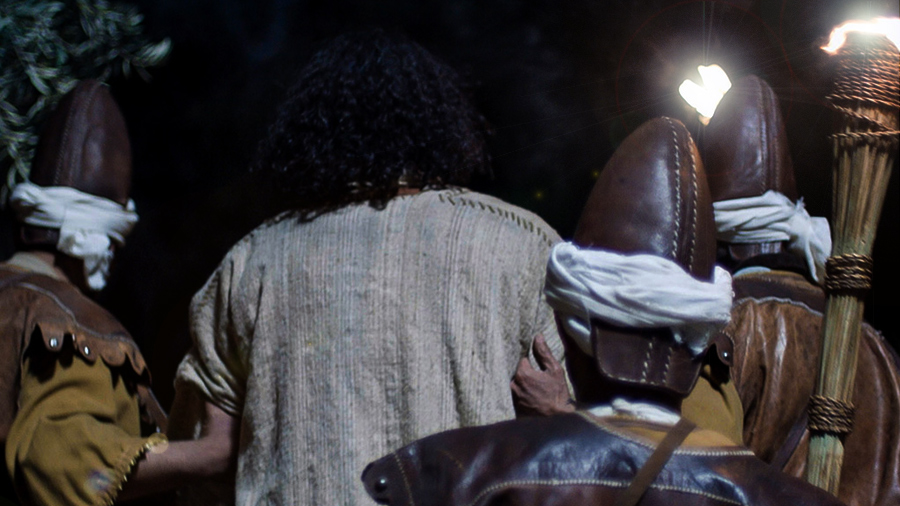 [NOTE] Jesus identifies himself twice, packing profound meaning into two simple words (John 18:5, 8). These two words, eigo eimi, were an emphatic way of saying, "I AM!" John wants us to identify this two-word phrase with the self-revelation of God's name and identity to Moses in Exodus 3:11-14, a theme that runs throughout his gospel. The soldiers and officials who came to arrest Jesus were Jewish leaders and Temple soldiers (John 18:3). They knew what Jesus meant by this crisp and repeated answer. Jesus was identifying himself as the God who delivered Israel from Egypt. With the Passover at hand, these soldiers were not about to approach anyone who might be their holy YAHWEH, God the great I AM, irreverently. Their holy fear quickly gave way to their orders from the High Priest primarily because Jesus was in control of the moment. They arrested Jesus because he chose to offer himself to them. Their instinctive reaction is the proper one and reminds us that no one takes Jesus' life from him, but he offers himself up willingly (John 10:17-18).

"Seed, Towel, Promise, and Torchlight: The Torchlight" by Phil Ware is licensed under a Creative Commons License. Heartlight encourages you to share this material with others in church bulletins, personal emails, and other non-commercial uses. Please see our Usage Guidelines for more information.