Some connections God makes inescapable no matter how costly obedience may be!

Special Note:
My weekly email, "Encouraging Words," is not about politics. However, issues that we label political often have moral components. I believe that is the case with the current refugee crisis in Europe. Government leaders may have to consider the consequences of their actions, but Christians have to consider the consequences of our inaction. Jesus tells a parable about the scene at the last judgment. It is all about how we treat "the least of these" — God's children who are hungry, thirsty, naked, sick, and in prison (Matthew 25:31-46). We must not allow these victims of oppression become victims of our neglect.

For the LORD your God is God of gods and Lord of lords, the great God, mighty and awesome, who shows no partiality and accepts no bribes. He defends the cause of the fatherless and the widow, and loves the foreigner residing among you, giving them food and clothing. And you are to love those who are foreigners, for you yourselves were foreigners in Egypt (Deuteronomy 10:17-19).

The LORD watches over the foreigner
and sustains the fatherless and the widow,
but he frustrates the ways of the wicked
(Psalm 146:9).

Since October 28, 1886, she has stood proudly in New York Harbor, not to guard it, but to welcome immigrants from far away places to take their place in the American melting pot. At nearby Ellis Island, now part of the Statue of Liberty National Monument, more than 12 million immigrants were welcomed between 1892 and 1954. These symbols of the hopes and dreams of millions remind us that diversity is one of our national strengths.

According to research done by a cousin, my first Scotch-Irish ancestor came to this country 10 generations ago, before the United States of America was born. I am a natural-born citizen of the United States due to generations of fortuitous circumstances completely beyond my control. I have no right to deny others the opportunity to acquire the blessing I have inherited.

We all have a mental image of the torch marking the high point of the Statue of Liberty, 305 feet above the ground of Liberty Island, but we have a harder time remembering the words at the base. Emma Lazarus, descended from Portuguese Sephardic Jews, wrote The New Colossus and donated it for an auction to raise funds to build the pedestal for the Statue of Liberty. These best-known lines appear on a bronze plaque:

Give me your tired, your poor,
Your huddled masses, yearning to breathe free,
The wretched refuse of your teeming shore.
Send these, the homeless, tempest-tossed to me,
I lift my lamp beside the golden door!

Issues that we label political often have moral components. I believe that is the case with the current refugee crisis in Europe.
I'm afraid those welcoming words belong more to our past than our present. Tired, poor, wretched, homeless are words that surely apply to the millions of Syrian nationals who are fleeing their homeland and flowing like a human tide to some place, any place where they can be free. There is great pressure for our government to extend a welcoming hand to thousands of these refugees, and great resistance to welcoming any of them. I opened a Bible a few days ago and left it open to the story of The Good Samaritan (Luke 10:25-37). Every time I pass by that open Bible, I remember that it was two people like me who failed and an outcast who showed mercy. Surely the Golden Rule belongs beside that Golden Door.

There was a time when we could feel secure in our nation, bounded east and west by two great oceans, and north and south by friendly neighbors. The events of 9/11 changed all that, and, with the threat of terrorism, nuclear war, long-range missile war, and even cyber-war, we may never feel truly safe again. Splendid isolation may have worked for a time in nineteenth-century England, but it's a fantasy in the global realities of today.

I'm not Catholic, but I find much to admire in Pope Francis, who is visiting our country this week. I was especially moved by his call for each Catholic parish to sponsor a refugee family. There are about 20,000 Catholic parishes in the U. S., and more than 300,000 non-Catholic congregations with some kind of Christian identity. I dream of even a fraction of those churches sponsoring a refugee family, or of smaller churches joining forces to provide for a family. I dream of what it could mean to the church where Mary Margaret and I are members if we would sponsor a refugee family, provide housing, food, clothing, friends, language skills, jobs, and, most of all, love. When despotic rulers deny us access to mission fields, God may bring mission fields to us. The greatest refugee crisis since World War II could become the greatest benevolence and even the greatest evangelistic opportunity of our lifetime.

On January 11, 1989, President Ronald Reagan gave his farewell address to the nation, including these eloquent words:

I've spoken of the shining city all my political life, but I don't know if I ever quite communicated what I saw when I said it. But in my mind it was a tall, proud city built on rocks stronger than oceans, wind-swept, God-blessed, and teeming with people of all kinds living in harmony and peace; a city with free ports that hummed with commerce and creativity. And if there had to be city walls, the walls had doors and the doors were open to anyone with the will and the heart to get here. 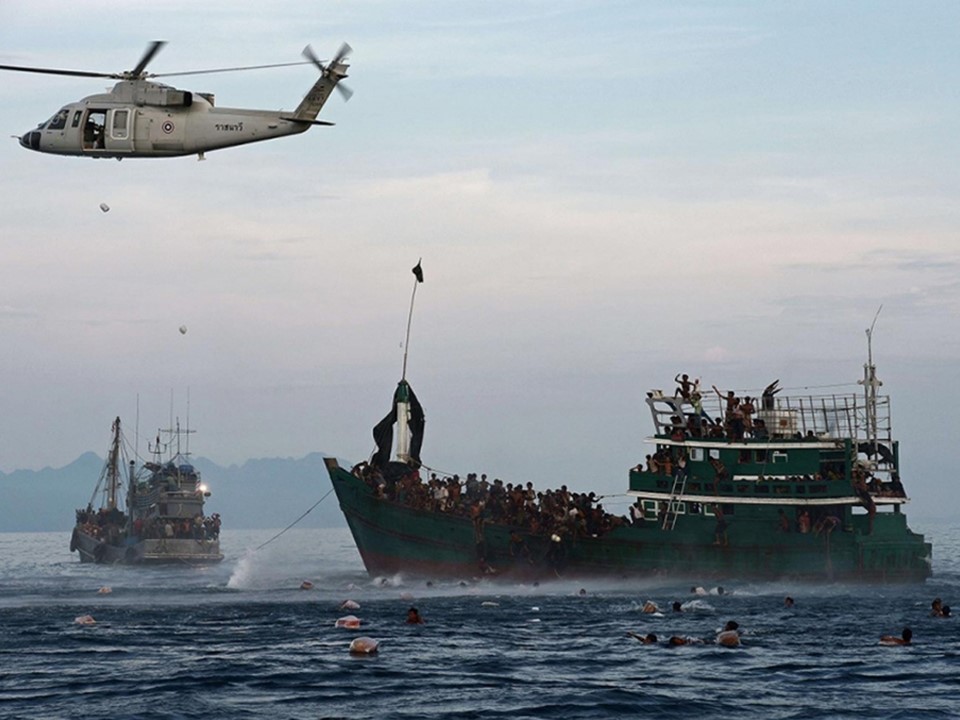 "Golden Rule, Golden Door!" by Phillip Morrison is licensed under a Creative Commons License. Heartlight encourages you to share this material with others in church bulletins, personal emails, and other non-commercial uses. Please see our Usage Guidelines for more information.