What do you do when you lose your grip? 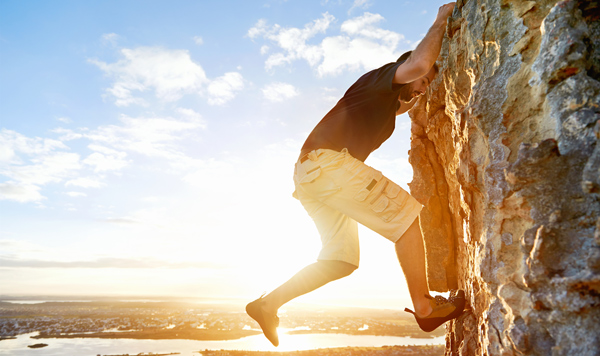 All our TV and print media are filled with frightening stories of terrorists, plots to murder national leaders, threats to the general public, and strategies for security. Otherwise, the filler stories are about plane crashes, local murders, and natural disasters. What a dark and threatening world we face!

Ours is neither the first generation nor are you the first individual to have a wringing-of-hands reaction to scary realities you are witnessing. An ancient poet named Asaph wrote this about his situation in Israel:

My feet had almost slipped; I had nearly lost my foothold. For I envied the arrogant when I saw the prosperity of the wicked (Psalm 73:2-3).

For Asaph, it appeared that the only people making a mark in the world were the ones who broke the rules, terrorized the innocent, and defied God. If he had once been naïve enough to think that washing behind his ears and eating his veggies would make him healthy, wealthy, and wise — and certainly secure from harm — he had long since been disabused of any such idea. (In fact, the first verse of his poem looks back to just such a time of innocence in his life!)

Now, however, he is looking back on a time when he "almost slipped" and "nearly lost [his] foothold" for living. Everything seemed chaotic and out of control. The bad guys were winning. And he was having a hard time believing that all the things he had once thought about God and goodness were true.

Asaph's experience is not unique to him. Practically everybody has his or her moment of confusion. She wonders if there is any point to doing the right thing; after all, everybody else seems to be having fun by cheating! He doubts himself for telling the truth; the person who got the promotion lied — about him!

Add to Asaph's personal experience his larger concerns about corruption in government and enemies at the gate and what appear to be ineffective means of setting things to rights — he is at the point of despair.

Ah, but he has survived the crisis and is looking back now. He writes from a perspective he lost momentarily in the midst of the storm that hit him. He realizes now that he had been trapped in an emotional reaction and had lost sight of some long-term beliefs and values that were central to his life. So he writes:

Whom have I in heaven but you?
And there is nothing on earth that I desire other than you.
My flesh and my heart may fail,
but God is the strength of my heart and my portion forever.
(Psalm 73:25-26)

If the problems seem too great, know that your God is much greater. 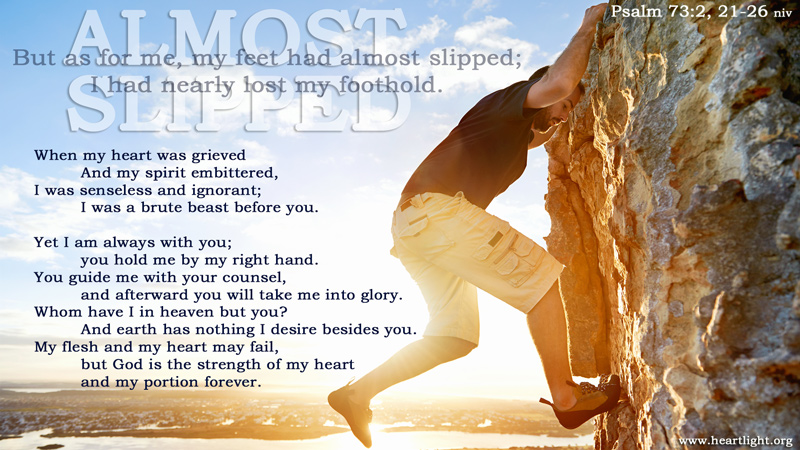 "Losing Your Footing?" by Rubel Shelly is licensed under a Creative Commons License. Heartlight encourages you to share this material with others in church bulletins, personal emails, and other non-commercial uses. Please see our Usage Guidelines for more information.