Can you resist the urge to speak when you shouldn't? 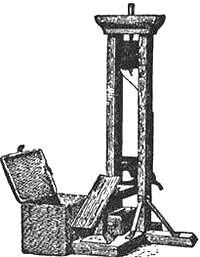 A preacher, a politician and an engineer were led to the guillotine. The preacher was asked if he wanted to be face up or face down when he met his fate. The preacher said that he would like to lie face up so he would be looking toward heaven when he died. The blade of the guillotine was raised and released. It came speeding down and suddenly stopped, just inches from his neck. The authorities took this as divine intervention and released the preacher.

Next, the politician came to the guillotine, and he also decided to die facing up, hoping he would be as fortunate as the preacher. So the blade of the guillotine was raised again and released. It came speeding down and suddenly stopped just inches from his neck, so he was released as well.

The engineer was next, and he too decided to die facing up. The executioner slowly raised the blade of the guillotine, when suddenly the engineer said, "Hey, I see what the problem is ..."

Even a fool is counted wise when he holds his peace!

Another reminder that we need to learn when to keep our mouths shut. As much as we may be anxious to share with people just how much we know, sometimes things are better left unsaid! Rarely will keeping quiet get us into trouble (though it can happen), but often do we find ourselves getting into trouble by saying something that should have gone unsaid.

One of my favorite proverbs is found in Proverbs 17:28: "Even a fool is counted wise when he holds his peace; when he shuts his lips, he is considered perceptive."

Very similar to the more recent saying: "Better to be thought a fool than to open your mouth and remove all doubt."

Lest you open your mouth today and say something you may later regret, stop for a moment before you speak and make sure it's the wise thing to do.

"Keep Your Mouth Shut" by Alan Smith is licensed under a Creative Commons License. Heartlight encourages you to share this material with others in church bulletins, personal emails, and other non-commercial uses. Please see our Usage Guidelines for more information.

ToGather: Please Encourage Someone! (October 25, 2020)
Today's message is a reminder of something that God, throughout the Scriptures and in every age, has urged his people to do: Encourage someone!

ToGather.church for October 25 is Ready!
You're invited to use our worship guide for your home or group worship!

God's Mission Through Jesus' People
Can you think of a more noble vision or a more compelling mission for us, the Lord's people, than to be Jesus' bodily presence to our fractured and fragmented world?