Doesn't sound like much of a plan, just to sit and pray, but it was Jesus' plan! 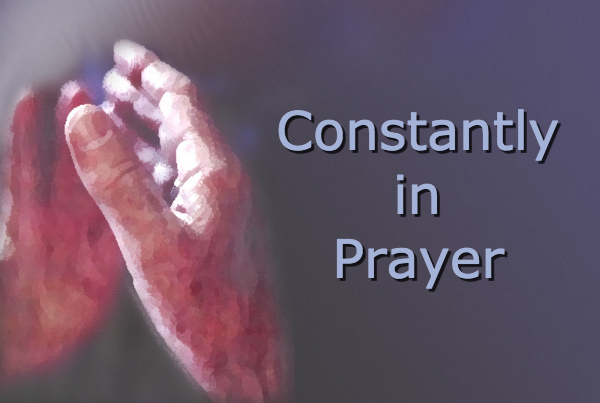 This is the last of four posts based on the first chapter of the book of Acts.

After he said this, he was taken up before their very eyes, and a cloud hid him from their sight (Acts 1:9).

I've always been amazed at the somewhat casual manner in which Luke reports Jesus' ascension. He writes as if he inhabits a world in which it is fairly routine for the law of gravity to be suspended and the space-time continuum rearranged, resulting in human bodies flying off into (and beyond) space while supernatural beings simply materialize, perplexed at why the witnesses to this singularity are looking up at the sky (Acts 1:10-11).

Conversely, we can't fathom why the disciples wouldn't be staring skyward! But with calm demeanor, the angels inform the disciples that what they have just witnessed is merely a precursor to a much more momentous event: "This same Jesus, who has been taken from you into heaven, will come back in the same way you have seen him go into heaven." The implications of that coming cataclysm were such that it was inappropriate to waste even a moment's time in awe-struck wonder over the miracle at hand. The countdown had been started! The clock was ticking! Time was running out, and there was a mission to be accomplished! And Acts is a book about a mission: "(B)e my witnesses... to the ends of the earth" (Acts 1:8).

We are heirs of that mission along with its inherent urgency. Yet we too often conduct our lives completely oblivious to it. Our minds flit from one seemingly essential task to another with scarcely a thought devoted to the Lord's final instruction: "(B)e my witnesses!"

We may even inwardly question our suitability for participation in the mission. "Be your witness in that workplace? Among those people? In this environment? With my self-doubts and fears?" From the depiction of the first disciples in the gospels, we have to believe that they raised similar objections to their participation in the mission. Yet, they could not escape the imperative of Jesus.

So what do you do when you're faced with the urgency of a crucial mission, overwhelming in scope, with limited time in which to accomplish it?

To use a contemporary cliché, you would surely say, "Go big or go home." It is surprising then to learn that Jesus' disciples didn't go big; they went "home" — back to Jerusalem... back to the familiar upper room that had been their meeting place. On top of that, their primary activity didn't appear to be very action oriented: "They all joined constantly together in prayer" (Acts 1:14).

I have to admit that I often see action and prayer as opposites. Faced with a need, I immediately assess my available resources, think through a plan, and then fly into action. Unless... it's one of those maddening enigmas where there really is nothing I can do. Unless it's one of those situations where every aspect of the problem is beyond my control. That's when I pray. I'm embarrassed to admit that when church members bring their problems to me, I'm usually quick to offer practical advice. Yet when the problem is overwhelmingly onerous, I am much more likely to say, "I'll be praying for you." Of course, I believe that prayer can make possible the impossible, but why is prayer not my immediate response to more "manageable" crises as well?

To their credit, the disciples had a different idea about prayer. In obedience to Jesus' instructions, they waited (Acts 1:4) in prayer. They didn't start an evangelism program or ramp up an outreach ministry. Prayer was their priority. In addition, the record from Acts 2 onward reflects the awesome spiritual power that came as a result of their devotion to prayer.

We would do well to follow their example. Waiting in prayer reminds us that we are not in charge, and it resets our expectations toward God's gracious intervention instead of our capacity for productivity. Waiting in prayer teaches us that the kingdom is God's doing, not ours, and that we must seek and follow his lead if we're to have a part in it. In this regard, I'm reminded of Pete Greig, the leader of a group that committed to praying 24/7 indefinitely. Listen to his observations about the experience:

Call the church to collective, focused, intentional prayer in pursuit of the calling and power of the Holy Spirit!

Prayer is not a big switch in the sky that makes revival happen. It's not a formula at all. It's a relationship. After a few weeks of nonstop prayer in that first 24-7 prayer room, I think we kind of thought, "Man, we've never prayed this hard before in our lives. Any minute now, the angel Gabriel is going to come through the clouds singing the Hallelujah Chorus and everybody is going to get saved." Don't get me wrong; we've seen plenty of remarkable answers to prayer, but it's just not like a Coke machine. You don't put in your prayer and get out a miracle. It's more agrarian. It's more organic. You sow something and you harvest it later, and it's often quite different than what you sowed.

To modify Greig's metaphor a bit, I would say that prayer is the soil in which God's work grows. I think of Jesus' statement:

The Son can do nothing by himself; he can do only what he sees his Father doing, because whatever the Father does the Son also does. For the Father loves the Son and shows him all he does (John 5:19-20).

Even the Son of God in the flesh could do nothing of substance apart from an intimate relationship in which God revealed himself clearly and Jesus came to fully understand his ways.

The essence of prayer is the development of that kind of intimate relationship with God. But we miss that when we envision prayer as merely "asking for stuff." I like the counsel offered in the eleventh of the famous Twelve Steps of AA:

We sought through prayer and meditation to increase our conscious contact with God, praying ONLY for a knowledge of his will and the power to carry it out.

We might find our prayers more effective if we shortened our prayer list to just those two items!

Finally, I would suggest that prayer is a community enterprise. The Greek word describing the manner in which the disciples prayed is homothumadon, variously translated as "in one accord" or "of one mind" or "together" (Acts 1:14). These were not believers with individual prayer lists who went to their personal prayer closets to address the Almighty. Prayer for them was a communal enterprise. I would suggest that one of the most productive actions a contemporary church leader could take would be to call the church to collective, focused, intentional prayer in pursuit of the calling and power of the Holy Spirit. 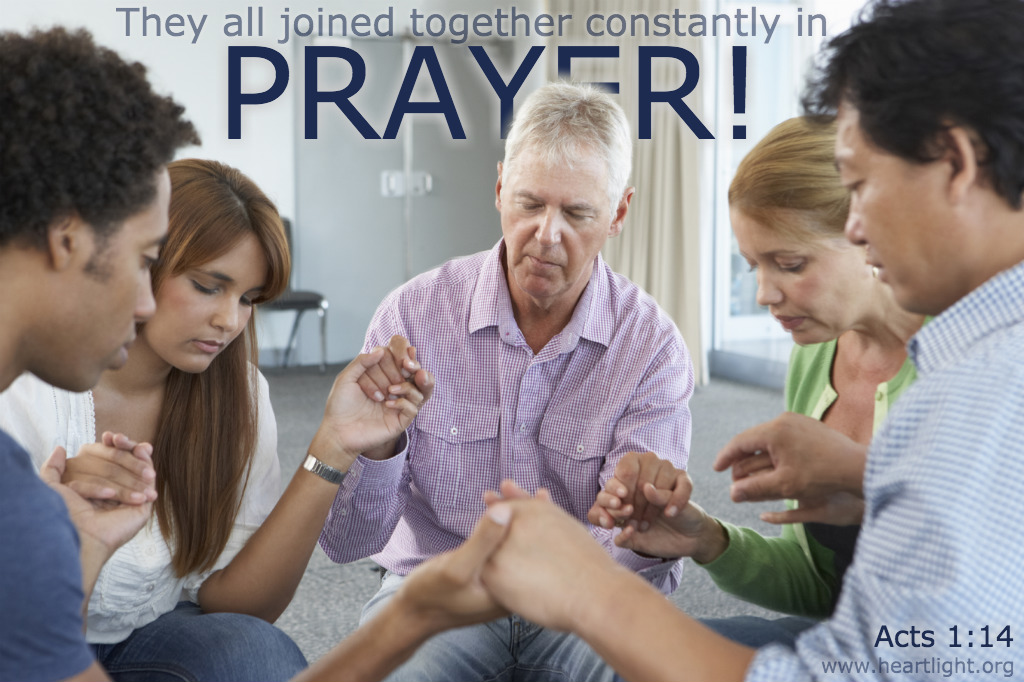 "Act(s) 1: Scene 4 — Constantly in Prayer" by Mark Frost is licensed under a Creative Commons License. Heartlight encourages you to share this material with others in church bulletins, personal emails, and other non-commercial uses. Please see our Usage Guidelines for more information.