More than a Gamble over Clothes

Is there a higher gamble that one can make in life? 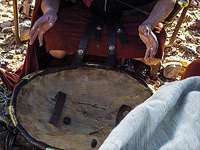 After they had nailed him to the cross, the soldiers gambled for his clothes by throwing dice. Then they sat around and kept guard as he hung there. A sign was fastened to the cross above Jesus' head, announcing the charge against him. It read: "This is Jesus, the King of the Jews" (Matthew 27:35-37 NLT).

The Roman officer and the other soldiers at the crucifixion were terrified by the earthquake and all that had happened. They said, "This man truly was the Son of God!" (Matthew 27:54).

The soldiers on Jesus' crucifixion detail cast lots and gambled for his clothes as he bled and died on the cross. The crowd mocked Jesus while he slowly died in unspeakable agony and open humiliation. 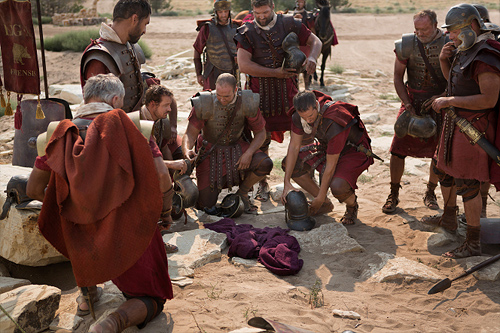 Soldiers gambled over Jesus' clothes as he died.

How does that strike you?

Are you repulsed? Are you deeply saddened? Does it make you angry?

Think about the scene at this cross a little longer. Let the enormity of what is happening sink into your heart. Think about what is at stake here. Consider the gamble that is made at this cross — not just the gambling of these soldiers over Jesus' clothes, but the bigger gamble over what is happening here. Those who reject Jesus' death as God's plan to share grace, show love, and redeem sinful humanity are gambling with much more at stake than just the clothes of a dying man.

Our hearts can be changed just like the hearts of the soldiers!
The soldiers were not just throwing dice for Jesus' clothes, they were also gambling that he was just another piece of criminal scum that it was their job to execute. As they inflicted this brutal death sentence on Jesus, they were also gambling that what others had told them about Jesus was correct — that he wasn't the Christ, wasn't the Son of God, wasn't the King of the Jews, and wasn't their Savior.

As the crucifixion began, what evidence did they have to believe Jesus was anything more than just another common criminal? Very little, until the crucifixion scene was finished and Jesus breathed his last words. Then, after seeing all the things that had transpired at Jesus' cross — how Jesus faced their cruelty and the cruelty of the mocking mob — they came to a different conclusion: "This man truly was the Son of God!"

Those who reject Jesus today, not only reject the judgment of the soldiers, but they also reject the transformation of Jesus' apostles — those frightened and hidden disciples who did not expect Jesus' resurrection, but then became world-changers after they had seen their resurrected Lord. They reject the testimony of millions of believers over the centuries whose lives have been changed by the power of the cross, have been given hope because of the resurrection, and have been empowered by the transforming power of the Holy Spirit. They reject the witness of Scripture which has endured centuries of ridicule and countless attempts to eliminate its influence, only to inspire more and more believers. 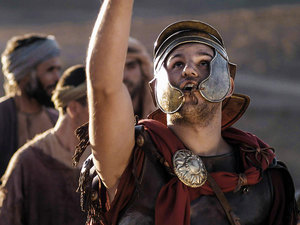 Jesus died for sinners. Jesus died for you. Jesus died for me. Every time we take these words lightly, reject them, or simply remain unmoved by them, then we are gambling at the foot of Jesus' cross. We are wagering that Jesus' death wasn't God's gift of grace to provide our salvation — that it doesn't really matter, that it was just a good guy's death that made no difference in the grand scheme of things. Such a wager makes the soldiers' wager seem pretty tame, doesn't it?

But, our hearts can be changed just like the hearts of the soldiers who had seen countless men killed in shame on crosses. Something in this story — in Jesus' identity and demeanor, in the Lord's shameless honoring of the Father's will, and in our Savior's willingness to do this for us — has an inexplicable power to grab our hearts. This is the power of the cross. This is why the cross was chosen. This is why Jesus endured its pain and shame to redeem us.

The message of the cross is foolish to those who are headed for destruction! But we who are being saved know it is the very power of God (1 Corinthians 1:18 NLT).

Father, I confess that I have sometimes not appreciated the enormity of what your Son endured at Calvary. I have not always been gripped with what all was at stake as he suffered and died. But now, as I see what was done to him and the calloused way in which his death was treated, I am shocked and horrified. I realize more now what was at stake when Jesus went to the cross and bore my sin so I could become your righteousness. With all my heart, I want to live the rest of my life scorning sin and rejoicing in your grace. In Jesus name I offer my thanks and praise. Amen.

"More than a Gamble over Clothes" by Phil Ware is licensed under a Creative Commons License. Heartlight encourages you to share this material with others in church bulletins, personal emails, and other non-commercial uses. Please see our Usage Guidelines for more information.