So what, or who, really put Jesus on the cross? 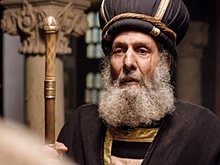 These two simple words tell the story of such an ugly and angry truth. What happened to Jesus in Jerusalem during his Passion was a hate crime. He had been labeled a criminal because he hung around with the wrong kinds of folks, didn't have the right kind of pedigree, and those in control worried that his popularity threatened Roman rule and the religious establishment of the Jewish Temple and priesthood. In addition, Jesus and his closest buddies had that hick-sounding Galilean accent that clearly made them outsiders to the politicos and religious leaders in Jerusalem.

In the minds of the politicians, the religious movers and shakers, and the supervising Roman authorities, Jesus wasn't worth the attention he was receiving from the crowds. Even worse, this attention was beginning to stir the hopeful imaginations of a long subjugated people. Jesus' presence threatened everything those in power always hold dear — the status quo, the peace and quiet, their positions of influence, and most of all, their job security and wealth.

You could say these leaders were jealous of Jesus and you would be correct.

You could suggest that they were nervous of Roman intervention because of the unrest in the crowds and you would be right.

You could assert that these leaders were reacting out of uncertainty and fear, and your assessment would not be wrong.

Yet at the bottom of all these reactions and emotions, there is one emotion that drove all the others: hate. The cross they would use against Jesus to try and silence him made their actions a murderous hate crime. 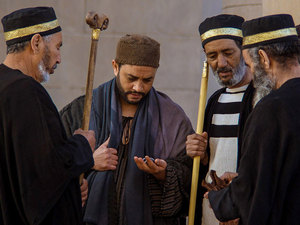 Jesus wasn't hated because he was a sweet, nice, non-threatening "why can't we all get along" kind of guy — the soft sweet Jesus so often portrayed in current mythology and popular culture. The real person was God's man. He spoke God's truth. He did God's work. He loved all kinds of people, not just the "nice" or powerful ones. He challenged common assumptions about God, religion, and power. He talked about an alternative way to live and called it the Kingdom of God — incendiary terms to those in power. Most of all, he spoke the truth to everyone and in every situation. He didn't back down. He didn't try to "spin" the truth so that he was acceptable. So the last week of Jesus' life was marked with intense conflict and ended with his death.

Even worse for those who feared and hated Jesus, his displays of power with his miracles fascinated and attracted the crowds. So from the moment Jesus raised his friend Lazarus from the dead in the very shadow of Jerusalem, the Jewish leaders began to look for ways to kill him. In their minds, it was better for them if Jesus were to die rather than the whole Jewish political and religious way of life come to an apocalyptic halt at the hands of the Romans.

Then Jesus rode into Jerusalem to shouts of adulation from the crowds:

"Peace in heaven and glory in the highest!"
The Son defeated the power of sin, death, and hate with forgiveness and loving sacrifice.
"Hosanna to the Son of David!"

"Hail King of the Jews!"

"Blessed is the King who comes in the name of the Lord!"

Jesus' presence and the crowd's adulation were direct threats to those in power. Jesus' popularity was so pervasive that the leaders who were "in power" were actually helpless to stop him. These leaders had to come up with a scheme to arrest Jesus away from the crowds and not cause a riot. His triumphal entry only added fuel to their internal fires of hatred and determination. It also gave these leaders the leverage they needed to stir up concern among the ruling Roman authorities. The problem was finding a way to get Jesus away from the crowds! 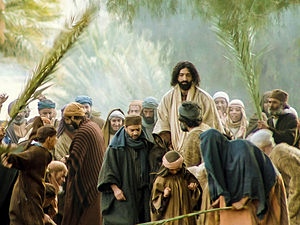 Fueled by their hatred of Jesus, the Jewish leaders began to scheme for a way to kill him before Passover. So they did their work illegally, at night, away from the crowds, using false witnesses, and a traitor named Judas. But their plan appeared to work. The were successful in murdering Jesus, the Messiah, the Son of God (Acts 2:33-36). Ironically, they carried out their vile deed on the same day the Passover lambs were killed as sacrifices for the sin of the people.

The leaders' fear, uncertainty, jealousy, greed, and hatred moved them to unleash their plot on Jesus. Little did they realize that they were fulfilling Isaiah's prophecy of the suffering servant (Isaiah 53:1-12). This suffering servant would give up his life, after being rejected and beaten; yet his wounds would provide the healing of the lost and broken. And this is what Jesus accomplished on the cross! So yes, their hate boiled in the background of the action in Jerusalem during Jesus' last week before the cross. This hate intensified with Jesus' triumphal entry. Their hate drafted Judas as a co-conspirator in their murderous scheme. Their hate led them to try Jesus at night. Their hate led them to blaspheme God and claim, "We have no king but Caesar!" Their hate succeeded in manipulating Pilate to order Jesus scourged and then crucified, while a terrorist was released to freedom. Their hate appeared to work! 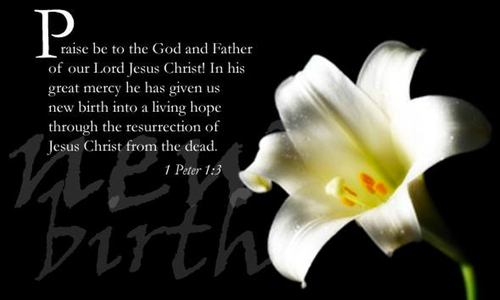 Yet hate, sin, death, and hell were actually defeated with Jesus' sacrificial death and triumphant resurrection and exit from the tomb. God in his mercy, grace, mystery, and power, took the worst of all that is human and absorbed it in the Son, Jesus of Nazareth. The Son defeated the power of sin, death, hell and hate with forgiveness and loving sacrifice. So while the cross is a hate crime, it is also a love offering. So as we journey with Jesus through the triumphal entry to the cross this week, let's not forget what hate did to Jesus and witness how his love leads us to God's incredible blessing:

God made him who had no sin to be sin for us, so that in him we might become the righteousness of God (2 Corinthians 5:21).

"Hate Crime or Love Offering?" by Phil Ware is licensed under a Creative Commons License. Heartlight encourages you to share this material with others in church bulletins, personal emails, and other non-commercial uses. Please see our Usage Guidelines for more information.