Are you making it up as you go?

Like it, or not, with the Indiana Jones movies, Spielberg has given us the epitome of the American hero, the knowledgeable good guy facing impossible odds on an epic adventure.

In the first film, "Raiders of the Lost Ark," Indie found the Ark of the Covenant, but lost it to the Nazi's. And, they loaded it on a truck bound for Cairo. Watching the truck leave in a cloud of dust, our hero turns to his trusted friend, Sallah and says, "Meet me at Omar's. Be ready for me. I'm going after that truck." 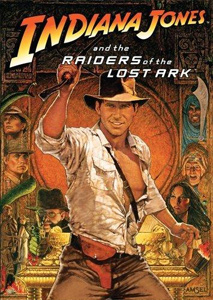 When we stop long enough to examine life, as we know it, we discover we too, are making it up as we go.

Life is filled with choices that form chapters in the adventure we call life. Each choice along the way is a faith experience, an opportunity to shape a future that honors God.

God does not predetermine each chapter of your life, he invites you into the family, transforms your identity, provides the gifts you need for the journey, and then sends you out to be his rock on rollerblades.

We live by faith, not by a book, or lesson-plan, or by someone else's expectations. Faith is filled with choices — decisions that focus on living so God looks good, period, regardless of the conditions or circumstances!

So, are you facing some difficult choices?

Quit wrestling and second-guessing, choose and take a step.

Where's the faith in that?
It was a "Seinfeld" episode: George Costanza was complaining about how his life turned out so badly. He concludes that he just makes too many wrong decisions. Jerry suggests that George should try doing the opposite of what he usually does. "If every instinct you have is wrong... then the opposite would have to be right."

At that point, the waitress comes to take the lunch order and asks George if he is having the usually. At first he shakes his head in affirmation, then...

"No, wait. I always have tuna on toast. Nothing's ever worked out for me with tuna on toast. I want the complete opposite of tuna on toast! I'll have chicken salad... untoasted... with potato salad... and a cup of tea!"

This seemingly trivial change sets off a series of events that eventually results in George getting a gorgeous new girlfriend and a dream job with the New York Yankees.

Make believe? Yes, but choices do profile our character and shape our future. Little choices can make big differences.

The goal of life is not a safe and comfortable existence. The goal is to be God's rock, even if he puts us on rollerblades.

Some of us are not natural-born adventurers. We like being average, normal, ordinary, living day after day in comfortable routines.

A few of us are extreme adventurers. We live for the unknown, for the mystery, for risk and danger and wonder.

No one said the life of an adventurer would be easy...

"Ordinary or Not?" by Ron Rose is licensed under a Creative Commons License. Heartlight encourages you to share this material with others in church bulletins, personal emails, and other non-commercial uses. Please see our Usage Guidelines for more information.