And God Saw that It Was Good

Perspective gained from a view of earth from space. 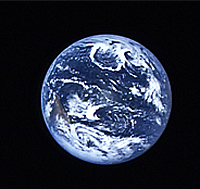 Right out of the box, January saw the Vietnam War take another disastrous turn as the Tet Offensive caused the deaths of more than a thousand Americans and South Vietnamese in just two weeks.

In February, the Kerner Commission reported that "our nation is moving toward two societies, one black, one white — separate and unequal."

In March, American soldiers were accused of killing more than 400 Vietnamese civilians in a far-away village called My Lai.

On April 4, Dr. Martin Luther King, Jr., 39, was assassinated while standing on a hotel balcony in Memphis. 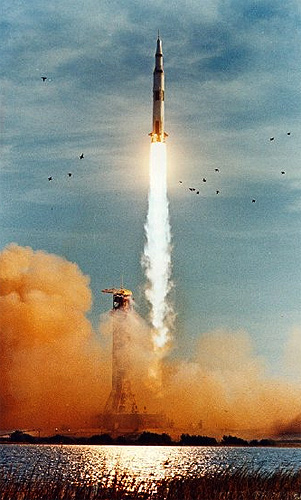 A horrible year was salvaged — redeemed, some would say — by the successful space mission called Apollo 8. Astronauts William Anders, Frank Borman, and Jim Lovell became the first human beings to orbit the moon and see things never before seen by human eyes. They were the first of only twenty-four people who have left our planet and gone to the moon.

It was 45 years ago yesterday, December 21, 1968, at 7:51 EST when a mighty Saturn V rocket carrying its first human cargo, lifted off from Cape Canaveral, Florida to begin a historic journey that would last 146 hours, 59 minutes, and 49 seconds. After a journey of approximately three days, the Apollo capsule entered lunar orbit, and would make ten orbits before returning to earth on December 27.

It was during the ninth orbit of the moon that Anders, Borman, and Lovell sent a priceless Christmas Eve gift back to earth. As they emerged from the backside of the moon and saw the earth hanging like a bright ornament in the sky — the picture would later be captioned Earthrise — they took turns reading the first words from the first book of the Bible: 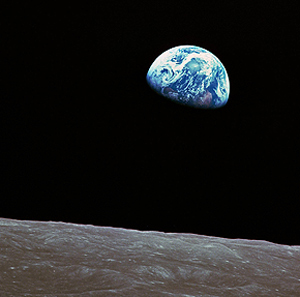 And God said, Let there be light: and there was light. And God saw the light, that it was good: and God divided the light from the darkness. And God called the light Day, and the Darkness he called Night. And the evening and the morning were the first day.

And God said, Let the waters under the heaven be gathered together unto one place, and let the dry land appear: and it was so. And God called the dry land Earth; and the gathering together of the waters called he Seas: and God saw that it was good (Genesis 1:1-10 RSV Emphasis is added by author.). 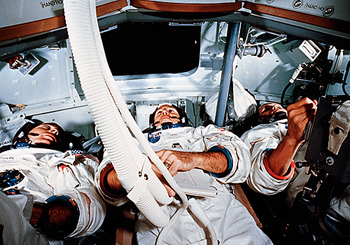 When Tom Brokaw wrote Boom! (his account of the 1960s), he saw this voyage and reading as bright hours in an otherwise disastrous year. When he interviewed Jim Lovell, the former astronaut, he found him still in awe as he remembered:

At one point I sighted the earth with my thumb — and my thumb from that distance fit over the entire planet. I realized how insignificant we all are if everything I'd ever known is behind my thumb.

Frank Borman said, "We came all this way to explore the Moon, and the most important thing is that we discovered the Earth."

Lovell remembers the people who sent messages from all around the globe, saying, "Thank you for saving 1968."

Lovell goes on to say the following:

When you see Earth from the moon you realize how fragile it is and just how limited the resources are. We're all astronauts on this spaceship Earth — about six or seven billion of us — and we have to work and live together.(Emphasis is added by author.)

To echo the closing words of Mission Commander Borman:

And from the crew of Apollo 8, we close with good night, good luck, a Merry Christmas, and God bless all of you on the Good Earth.(Emphasis is added by author.)

"And God Saw that It Was Good" by Phillip Morrison is licensed under a Creative Commons License. Heartlight encourages you to share this material with others in church bulletins, personal emails, and other non-commercial uses. Please see our Usage Guidelines for more information.