When You're this Close to Giving up Hope

Can you still believe you can fly with broken wings?

by Ann Voskamp (12/19/2013) | Just for Women
She'd dropped her voice when she told me that first Sunday of Advent that the kid had tried to kill himself.

That there had been texts, photos of a rope, proof of how it was going to be done.

This was the part that she didn't have words for.

Her hands flailed a bit, like she was drowning, like her flooding tears were drowning her, and she choked and flailed, reaching for words to steady herself, as if she could just find words, she could drag herself up out of the depths.

How do you make words stretch around an entire ocean of ache?

When your heart is detonated on an unassuming morning in December and this whole dam lets go and you're swept away in this flood of pain? 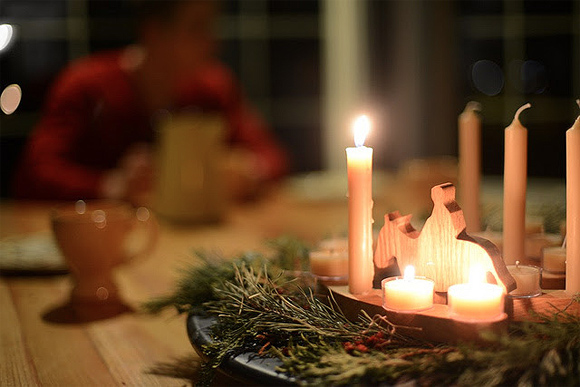 There was nothing that seemed right except to look right into her eyes and not look away. Death gurgles can't be helped up to air by words, by mere, smothering words.

Death gurgles only gasp relief with the gift of presence, by someone taking you close, lifting you with the soundless warmth of themselves.

I reached for her hand. We found our legs and stood. We went for a walk. Yeah, no chocolate therapy. Neither one of us drinks. So you do what teetotalers and 40-something women who don't need any more calories can do — I asked her if she had time to step into the conservatory down by the river.

The butterfly conservatory on the first Sunday of Advent. The first Sunday of Advent when everywhere there is this lighting of the Hope candle. When hope rattled more like a death gurgle in her and the boy was somewhere in the bowels of a psychiatric ward where they try to wrench you from ropes and bed sheets and your own strangling demons.

Maybe if she saw the lighting and flying, maybe she could believe in things unseen? 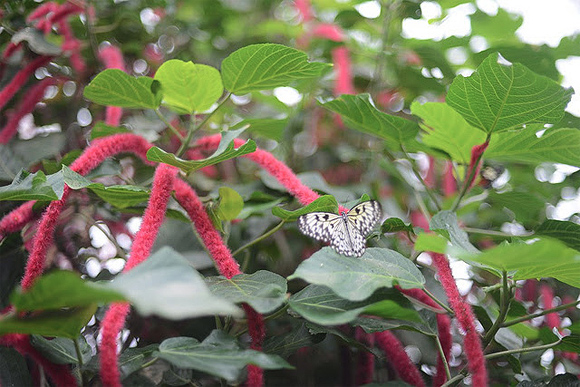 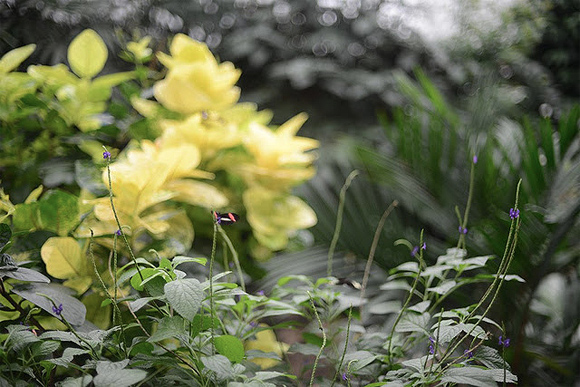 I held the conservatory's door open for her. It's what hit you when you first stepped into the glass dome — the lightness of the air in here. Here, for a moment, she could breathe here. The waterfall kept murmuring of things coming from somewhere else. Wings, everywhere wings, lighting and lifting, a thousand wings.

She did put one foot in front of the other. This can be the biggest brave.

And what she was feeling was actual facts — the boy had been pummeled. People who should have loved him had abused him of all dignity. Places that should have carried him had mercilessly, mockingly crushed him. Promises that should have helped him up had laughed loud and kicked him in the gut. How busted up can you be before your only future is to bust up everyone else?

How do you sand down the razor shards of a shattered heart and piece them together enough so they don't go around blithely slashing everyone else?

How do you hope unlikely things because you love someone to death?

We stood for a long time and stared at the chrysalises.

Thin sheens hung by threads. It didn't seem possible — that out of silken threads, wings unfolded wet. But we watched it happen. 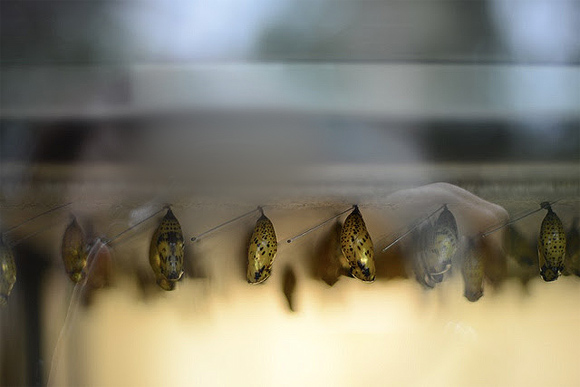 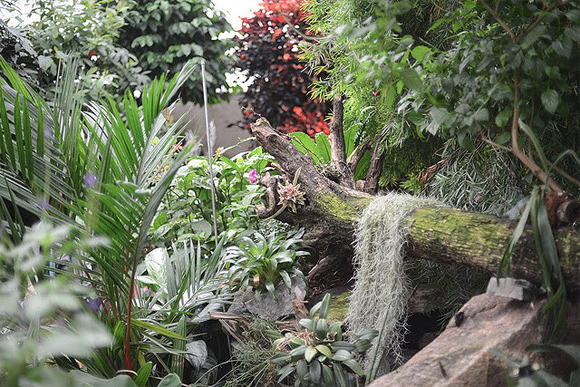 There were no words. Simply witnessing. We sat at the waterfall. We waited.

"A blue one... " she said it quiet. "I need just one photo of a blue morpho butterfly, and then we really have to go." Yes, the morpho butterfly — whose very name means changed. We all need to believe that things can change.

Like wanna-be hunters on some scam safari, wielding cameras for just one shot, we slunk up quiet to this bloom with its mouth opened like a candy bowl of tempting nectar, we snuck behind that lily and this leaf, and the whole farce was good comic relief, us looking more like bad detectives in a cheap 1970's rerun. Everywhere morpho butterflies slapped shut their inner blue wings, stared back steely at us with their drab outer brown wings. 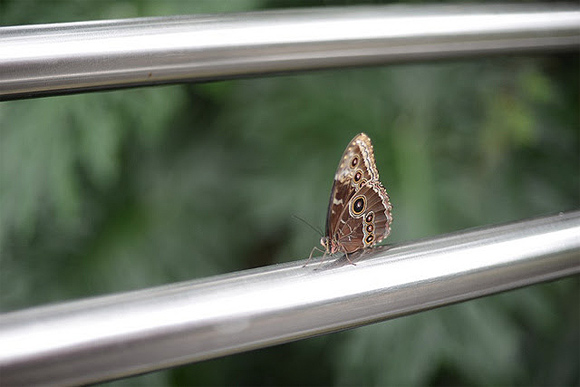 Please, Lord — just give her one open spread of blue wings. For crying prayers out loud, just a bit of hope to take out of here.

We waited. Did what the wisest have always done: Waited and Hoped. And the morpho butterfly just outwaited us.

Flitted blue now and then, always a flash on the periphery, glanced us with possibility, but wherever we spun, it locked us out with a determined bland brown.

We're standing there with our waiting cameras and our frames of brown, without a hint of blue — and I look over at my friend and you can read it like a headline, her flat resignation.

A walk through a butterfly conservatory that was supposed to be this metaphor of hope — is fast turning into this mockery of hope.

Sometimes believing in a miracle feels like living in a mirage. You can feel like a fool, walking around with your pitcher.

Waiting for a picture.

"My battery is about dead... " She looks down at her camera. She doesn't have to tell me that there's a lot more deadened than that. "Let's go."

I turn my camera off, nod.

What else do you say to a woman who just can't stand the teasing evasiveness of hope mocking her one moment longer?

"One of the morphos has landed on you. Right on you."

I don't move. I turn slow to look for his stubborn outer brown wings. 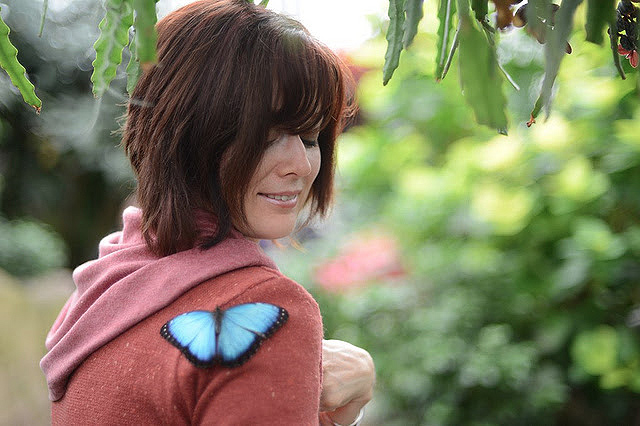 "And he's wide open blue." The park ranger kneels. "You don't understand — they don't do this. They're the ones that don't land on people. And they about never rest in their wide open blue."

And we rest with these open hands in Him.
My friend nods, she knows, mouth wide open, raising her camera, she knows.

She clicks, snaps, shoots, takes more. More people stop, take more photos. The park ranger asks for my camera, takes a few more. "You don't understand," he whispers... "it's about impossible to get photos of them with their wings in their open blue."

I nod — whisper it over the indigo wings open there on my shoulder: "And then sometimes — the impossible unfolds into the possible."

I look over at my friend... who is brimming. Spilling. Tears are never a sign of weakness. Tears are always the sign of an open heart.

And I mouth it to her, like it's more certain without any sound, like I don't want it to slip away from either one of us:

It was the first Sunday of Advent. Hope candles were lit everywhere. God is giving Hope.

Hope lights on you and Hope's just up ahead nodding that it's going to be okay — you will be okay.

My friend, she's nodding at me. Nodding at this wide open blue butterfly on my shoulder. And her face is right wet, an ocean of ache running like a waterfall of hope now, right off the edge of her chin, and she chokes it out — "How could we ever not believe? How can we ever not hope in impossible things now?"

The butterfly refuses to close its wings — refuses to do anything but remain open.

And I nod yes, yes because it's a paradox: the way to hold fast to what you're hoping for, is to hold that Hope with openness.

With openness, hold fast to that Hope — for if the Hope ebbs away, you become a broken wing who cannot fly.

No matter how we're hurting — it's only when we lose hope that the real horror happens.

She's shoulder-wracked, wet, heaving with the relief of it and I pull her close and pray like we've been touched, like He's come near the very first Sunday of Advent and Hope candles blazing everywhere unwavering and there's a boy who can believe — and live — and there's a weary woman who's rising and there's Christ who comes to give us the gift every one wants more than anything — a future and a hope.

"25 minutes." She whispers. "That morph butterfly has sat on your shoulder for almost 25 minutes."

And I nod. Of course.

The very least you can do with your life is welcome in Hope. And He has a name.

And the very best you can do with your life is build a life with Hope. Live right under a roof of Hope.

But then you'd just stand and look and trust you were meant to see stars.

But then you'd just stand and look and trust that you were meant to soar.

The morpho butterfly rests with these open wings on me.

And we rest with these open hands in Him. 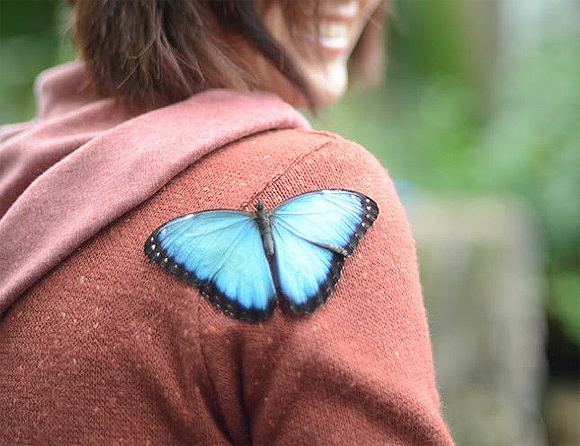 Hope is the thing with wings

That lands at the end of you

And shows you how to open to possibilities

So you never close again.

And hope will never fail to satisfy our deepest need because the Holy Spirit that was given to us has flooded our hearts with God’s love (Romans 5:5 The Voice).

This article is from Ann's incredible blog, A Holy Experience. Ann Voskamp is a beloved author, blogger, Compassion advocate, wife, and mother.

"When You're this Close to Giving up Hope" by Ann Voskamp is licensed under a Creative Commons License. Heartlight encourages you to share this material with others in church bulletins, personal emails, and other non-commercial uses. Please see our Usage Guidelines for more information.