It's just a little Thing... not Really! 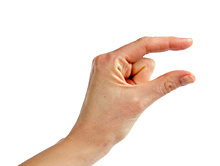 by Tom Norvell (03/26/2013) | Special Features
Have you noticed that much of life is made of events or happenings or opportunities or things that might fall into a classification of a very little thing, but not really? You may have another way of describing them, but you know the kinds of things I am referring to.

On the negative side it may be that hangnail that, no matter how hard you try, you cannot clip. It's a little thing, but not really.

It may be that person at work who gets on your nerves. You come into the office with a great attitude and within minutes after a short interaction your day is ruined. It's a little thing, but not really.

It may be that conversation that you seem to have over and over again with your boss or your spouse or your children. You have had the same conversation a hundred times. Nothing ever changes. You talk about changes, but nothing ever does. It's a little thing, but not really.

Maybe it is that sound in your car. It is a rattle. Or it is a squeak. You cannot pinpoint where it is coming from. Everything else is quiet and smooth, except for that noise. It's a little thing, but not really.

It could be that bump on the side of your face. Not a big bump. It turns an odd shade of red. It is a little tender. Finally you go to the doctor and he says, "We better have it checked out." It appears to be a little thing, but maybe it's not really.

It may be that cough that just will not go away. You have taken some over the counter cough medicine. That helps for a few minutes but it starts up again when you lay down. You call the nurse and she says, "You better come in. It sounds like a little thing. But maybe it's not."

Maybe it is that thing that your husband does, or does not do, that hurts you, or disappoints you, or makes you question whether or not he really loves you. He says it does. But if he does would he not take your feelings into consideration? Why does he keep doing that? Why is he not listening to me? You try to ignore it. Everything else seems to be going well. Do I really want to stir things up? It's such a little thing, but maybe not.

On the positive side there are many little things that can make a profound difference in how you approach the day.

The person in the drive-thru at Starbucks pays for your coffee. It's a little thing, but not really.

The person coming through your checkout line compliments you on your nice smile. It's a little thing, but not really.

$2.26 provides a meal at the Nashville Rescue Mission. It's a little thing, but not really.

The note you received in the mail from the friend you have not seen in a long time. It's a little thing, but not really.

You led a prayer at church. You could not remember what you were trying to say and had a long awkward pause. You stumbled all over yourself. And you felt like you did a horrible job. But one of the older men came to you and said, "You did a great job! Thank you for your prayer." It's a little thing, but not really.

You walked into the new church for the first time. You are all alone in a new city and in a new church. A young couple saw and came toward, introduced themselves, and asked if you would like to sit with them. They introduced you to several members, invited you to their class, and took you home for lunch. It's a little thing, but not really.

Jesus talked about offering a cup of cold water in His name (Mark 9:41). He told stories of stopping to help a stranger. He rebuked His disciples when they tried to stop little children when they ran to Him. They seem like little things, but not really.

"It's just a little Thing... not Really!" by Tom Norvell is licensed under a Creative Commons License. Heartlight encourages you to share this material with others in church bulletins, personal emails, and other non-commercial uses. Please see our Usage Guidelines for more information.