Is Cleanliness really next to Godliness? 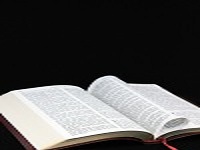 by Steve Ridgell (03/20/2013) | Hope for Life
This is one of those sayings you often hear: cleanliness is next to Godliness. Many people even assume that it must a statement from the Bible. It is not. God never said this. I can understand why Moms everywhere would believe this is truth straight from God’s mouth. And I get why little boys everywhere are thrilled to know it is not a Bible verse. Now do not misunderstand me. I am very much in favor of cleanliness. I am just not in favor of attributing things to God that he did not really say. Some might even ask why it is such a big deal. Here is why. It is a dangerous practice to speak for God on things he did not say. It is even more dangerous to speak for God in ways different from what he did say.

There is a difference between what God says and what men think he said. Or wish he said. Or believe that he meant by what he said. It is popular today to say that God’s love is so powerful that it will save everyone and that no one will have to live for eternity in hell away from God. Is that really what God says?

God does say in II Peter 3:9 that he does “not want anyone to perish, but everyone to come to repentance.” That is a great statement of God’s incredible desire for all of us to live with him forever. As is this statement in John 3:16: “For God so loved the world that he gave his one and only Son, that whoever believes in him shall not perish but have eternal life.” God not only wants us to be saved but he sent his son so we could be.

God wants everyone to be saved, and he does not want anyone to perish. I can say that because he did. However, God expects us to believe and to repent. I can say that because he did. Read again what God said in the Bible verses above. He does not want us to perish, but instead to repent. He loves us so much that he sent his son so we can live forever… if we believe in his son. So when someone says that God loves you so much that he will not let you go to hell, they are not saying what God said. They are saying what they think. And there is a difference.

I think cleanliness is a great thing. But God never said it was connected to being like him. But he does say a great deal about being made clean from our sins in order to live with him forever. If you would like to talk about what God really said, let me know. Write me at steve@hopeforlife.org or join the blog discussion at www.hopeforlife.org.

"Is Cleanliness really next to Godliness?" by Steve Ridgell is licensed under a Creative Commons License. Heartlight encourages you to share this material with others in church bulletins, personal emails, and other non-commercial uses. Please see our Usage Guidelines for more information.