A touching reminder of why we do some very simple, but important things! 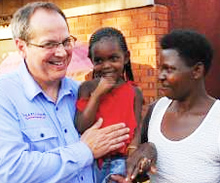 by Phil Ware (02/22/2013) | Two Minute Meditations
We opened our letter from one of our Compassion children and were delighted to see it was from Doreen. We received a few precious hand-drawn images that were done in Crayola. We were given a few words for things in the language that Doreen speaks. And then came the shocker. Right in the middle of talking about how Doreen was doing in her day-to-day life, the message came that Doreen had lost her mother.

Wham! The reality of the message hit home with me. I even gasped as I read the words the first time. She and her five siblings were being raised by their grandmother: their mother and father were both now dead to the plague that has wiped out so many parents in their part of the world. My heart broke for her. I knew this day would probably come before she was an adult, but I did not have any idea it would come so soon! 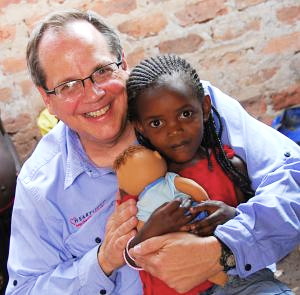 Donna quickly filled out the letter form to send a special letter to Doreen. I rummaged through my old photos and found one of Doreen and her mother. I was standing with them as we said good bye. I am pretty sure Doreen had no pictures of her mother and I wanted her to have a picture of happier times — times not so long ago.

You see, five years ago, I boarded a plane in Chicago with the first group of "Compassion Bloggers" to go to Uganda and see the work of Compassion International in a place far from my home. The trip began a number of months before when my wife, Donna, and I were talking about our one Compassion Child we were supporting. Starlin lives in the Dominican Republic. Donna said she felt a strong pull from the Lord to support a little girl in Africa. We talked about it awhile and decided that would be a good thing.

That very same day, Tom, a friend who works with Compassion, emailed and asked if I would like to go on a Compassion trip to Uganda! No kidding — the very same day!

I said, "Yes!" without even asking Donna. We don't believe in coincidences — we've learned to call them "God-incidences" — and the work of the Holy Spirit seemed all too clear. I told Tom, "The only stipulation is that you find us a little girl who needs a long-term sponsor. And of course, if possible, I'd love to meet her on the trip."

We were matched almost immediately, to a little girl named Doreen. She had just turned 3. Her life had been spared because of the Compassion Child Survival Program (CSP) that makes sure children whose mothers have a terminal disease receive medicine, childhood innoculations, and baby formula that helps them not catch the disease from their mothers. To put it bluntly, Doreen would not have lived to be sponsored by our family if she had not been in the CSP! I would not have ever met her. She would have never had a chance at life and love and learning about Jesus.

The visit was a wonderful shock! I have been to many poor places in the world, but the long walk up the hill into the slums of Kampala was unlike any poverty I had ever seen. The smells ranged from the smell of those smoking pot to the drainage of human waste in open sewers to the smell of open fires.

The accompanying video lets you walk into the moment with me. You will see how uncertain Doreen is about me at first, but as the visit went along, she warmed up to me and we had a great time! She was wearing shoes that were too small, but loaned to her by one neighbor, her red top from another neighbor, and her denim skirt from another. Her mom had done her hair special for the occasion. Neighbors crowded around to see the strange visitor — the first "white" person that most of them had ever seen in person. (Special thanks to the great Compassion supporter, Michael W. Smith, for his song, "In Silence" that is the background music for this video.)

I can remember the dimly lit 60 square foot room where all 8 of them lived (6 children, a mother and a grandmother), the smells, and the gentle smile on the face of Doreen's mother when I asked her, "What is your dream for your six children?" Since she did not speak English, the interpreter then relayed the question with a bit of explanation.

I am confident that this now departed mother's dreams will come true.
We all came to this moment drenched in emotion. Tears welled in her eyes. I had spent the previous seventy minutes with this woman and her children in the middle of the unspeakable filth and stench of a slum worse than I, or any of my seasoned companions, had ever seen. The room was less than eight by eight feet in size. Eight people called this their home. The mother struggled with her own physical problems. Her husband was gone — he hadn't run off, he had gotten "the skinny" and gone away to die of the disease ravaging Africa at the time.

The grandmother of these six children slipped back into the shadows of one corner and ducked her head, leaving Doreen's mother to answer this question on her own. She gave a short answer. Her voice was soft and distant as if speaking from some unseen place in the deepest corner of her soul.

The interpreter paused as his eyes filled with tears and reddened. This mother's voice he interpreted was now even more distant than before. Her answer was carrying an element of shame that she could offer nothing more as a vision for her children's future. The interpreter translated in a trembling voice, "She hopes her children can live to adulthood." Those were the stark words of the interpreter as he ducked his head and refused eye contact. His voice sounded resigned and deeply empathetic.

These words from Doreen's mother spoke volumes. They didn't speak about her dreams. Nor her prayers. Nor her assumptions. Nor her expectations. The wildest hopes she had were small by most modern standards, but huge in this place where we stood. I understood — at least as much as one so blessed and protected could understand. She wanted her children to live to adulthood — an adulthood she would probably never see. And now... I know she didn't see them grow up. 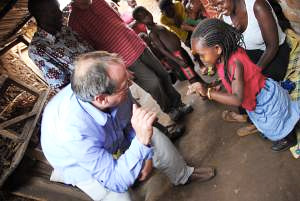 Some things just matter more. I'm not sorry to say it because it is true. For less than $40 per month, less than $500 per year, I can help a mother who is now dead have her dream for her children come true. That's less than the cost of a bottle of water, a soda pop, or a cup of coffee a day. And it makes the difference between a little baby girl dying before she ever walks and a little girl who has learned about Jesus growing to be a mother of her own children.

To learn more about sponsoring a child check out the Compassion website or email me!

For more on the original trip to Uganda!

"Some Things just Matter More!" by Phil Ware is licensed under a Creative Commons License. Heartlight encourages you to share this material with others in church bulletins, personal emails, and other non-commercial uses. Please see our Usage Guidelines for more information.