Colombia is associated with violence, kidnappings and drugs but is also a place of hope for over 55,000 children. 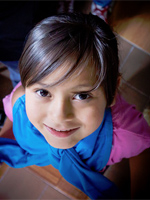 I was privileged to travel with a team of people to see the work that Compassion is doing in partnership with nearly 200 local churches in Colombia. We were able to take a first-hand look at how their child sponsorship program works by connecting sponsors with kids, helping them to escape the grip of poverty in all its forms.

Nicol. Sebastian. Miguel. Wendy. Samuel. Pablo. Just a few names from the hundreds of kids we met that refuse to believe the lie of poverty which says they don't matter. They were beautiful children with incredible stories of heartbreak and hope.

But the story I'm sharing today belongs to an adult whose childhood was very similar to the children I met. Jailer (pronounced "high-ler") was an eight year old kid growing up in Colombia. 80% of the people in his neighborhood were enslaved by poverty. It was a place where hopes and dreams were as scarce as food and clothing. Now 24 years old, Jailer has a degree in civil engineering and works with Compassion International's Complementary Intervention Program. I was fortunate to spend several days with Jailer as he served as a translator for our team. He's a great young man full of life and love for God.

Jailer's story is much different than it could have been thanks to Michael and Susan Sutherland: a couple who sponsored Jailer through Compassion International for 10 years. They shared their story of sponsoring Jailer at the Catalyst Convention in 2012. Here are two videos from that event:

It was a place where hopes and dreams were as scarce as food and clothing.

While Jailer's story of success and accomplishment is moving, I'm more deeply moved by the love of the Sutherlands. They saw a child—the kingdom of God (Matthew 19:14)—and rather than keeping him from Jesus as his apostles did, they committed to helping him grow in wisdom, stature and favor with God and man. Their sponsorship of Jailer through Compassion International was the kind of action Christ not only demonstrated but asks of us. While the Sutherlands are proud of the man he's become, his success was not a condition of their love and support—it was a byproduct of it.

Here at Heartlight we've personally sponsored several children through Compassion International and I can say without hesitation how incredible and beneficial this program is in the lives of over 1 million children in 26 countries. I also want to thank you, our readers for helping sponsor over 650+ children over the past several years! We're extremely proud yet humbled by your willingness to care for "the least of these."

If you haven't ever considered sponsoring a child, would you please prayerfully consider it? You can learn more about the program by visiting Compassion International's website or contacting us. We hope you'll join us in this wonderful work of releasing children from poverty in Jesus' name.

"Compassion in Colombia" by Ben Steed is licensed under a Creative Commons License. Heartlight encourages you to share this material with others in church bulletins, personal emails, and other non-commercial uses. Please see our Usage Guidelines for more information.