Knowing Your Role in the Game of Life

What position are you trying to play in life's big game? 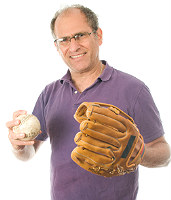 Jesus traveled throughout Galilee teaching in the synagogues, preaching everywhere the Good News about the Kingdom. And he healed people who had every kind of sickness and disease (Matthew 4:24 NLT).

Andre didn't have a clue what to do. Andre was from Bulgaria and had never seen softball before. Before he knew what was happening, he was playing catcher and catch-up at the same time.

Our team needed a tenth player and Andre was a warm body. We put him at catcher thinking it would simplify things. "He won't have to move much. Just catch the ball and throw it back to the pitcher."

We stood him behind home plate and left him there. When we turned around, Andre was still standing where we left him. We told him to bend down. He did — like he was touching his toes. A team member had to run back out and show him how to crouch down behind home plate.

Andre was listed as #10 in the batting line-up. We thought he'd have time to get the idea of hitting the ball. He did. On the second pitch Andre hit the ball! It wasn't great, but it was worth a run to first. Andre just stood there watching the ball. We all yelled at him to run. He did. Towards third base. (I'm not making this up!)

I had a little visit with Andre on the bench. (That's where you could usually find me in a softball game.) I showed him where first base was and explained to him how he needed to run like the wind toward it if he hit the ball. Next time up he connected again. This time he ran. As hard as he could. To first base. He kept running and didn't stop. Not even at first base! Next thing we knew, Andre was in right field yelling, "Touchdown!"

You've been there, too, haven't you? In a strange world wondering what you were supposed to be doing? Remember the first day on the job? You interviewed well. Showed them how confident you were. Then suddenly there you were: a new desk, a new computer, and a new realization that you didn't have a clue how to get started.

Life can be like that sometimes. We're put in strange situations and don't know how to respond. We run in wrong directions. We find ourselves out in right field. We need a job description to tell us what we are supposed to be doing.

Surprisingly, even followers of Jesus seem to need a job description for life. A large-scale survey conducted by the Barna Research group revealed some startling information. When Christian adults were asked to identify their most important goal for their lives, not a single person said it was to be a committed follower of Jesus. Less than one out of every five had any specific and measurable goals related to their personal spiritual development.

Surprisingly, even followers of Jesus seem to need a job description for life.
Jesus' invitation is "follow me." That's the job description: to follow him and learn from him to do what he would do in your shoes. And Jesus basically did two things: he had something to say and something to do.

Jesus proclaimed good news. He told people that God had done something for them they could not do for themselves, that through Jesus he had made right their relationship with him.

Jesus also served people. Although God in human flesh, he did not come to be served, but to serve. He listened, healed, encouraged, taught, and loved those he encountered.

Jesus traveled through all the cities and villages of that area, teaching in the synagogues and announcing the Good News about the Kingdom. And wherever he went, he healed people of every sort of disease and illness (Matthew 9:35 NLT).

"Knowing Your Role in the Game of Life" by Rick Brown is licensed under a Creative Commons License. Heartlight encourages you to share this material with others in church bulletins, personal emails, and other non-commercial uses. Please see our Usage Guidelines for more information.