Jesus calls us beyond the narrow caricatures of grace. 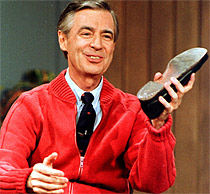 by Phil Ware (03/11/2012) | Two Minute Meditations
No one is more beloved for his TV career than Mr. Rogers. His soft, direct, kind and tender words to children communicated to them that they were important, could be honest about their feelings, didn't have to do things that made them afraid, and could sit for thirty minutes each day with a friend who loved and accepted them. Each day's show in our home ended with the sweet voice of our young daughter saying, "Good bye Mistuh Wadguhs."

Yet Fred Rogers was so much more than Mr. Rogers on the TV show — especially the unkind caricatures of him often done in comedy skits. He didn't have hidden evil secrets like so many TV personalities do, but he was an incredibly talented pianist, an ordained minister, and a fearless and tough champion of children's rights and wholesome children's television.

Today, we face a growing wave of misconception about Jesus and what it means to accept others as Jesus did. There is no doubt that Jesus did not let any barrier keep him from reaching out to every kind of person imaginable. He offered grace and acceptance to everyone.

Unfortunately, many people want a Jesus that is a grownup caricature of Mr. Rogers — safe, accepting, benign, with no demands or expectations. But Jesus called people to follow him — to learn from him, obey him, become like him, and pass on his character and compassion to others. Grace meant accepting people where they were and calling them to a new place, a higher calling, a holy walk, with his Father (Matthew 28:18-20;  Luke 6:40). In other words, grace didn't just save people from their messes; it also called them to a holy life as God's child.

Yes, Jesus was patient — he invested over three years in his apostles who often didn't understand or live up to their calling and eventually all failed when he was arrested and crucified. Yet he did expect them to do the will of their Father in heaven (Mark 3:35) and he stressed that their place, and our place, before God would be based on whether we put into practice what God asks of us (Matthew 7:13-27).

None of us would ever think of taking a baby who had dirtied his or her diaper and washing the baby's bottom and then putting that baby back into the dirty diaper. Yet that is what all too frequently happens in today's version of Christianity. There is no call for people to follow Jesus as Lord, no challenge to surrender to his will in obedience, and little encouragement to pursue the holiness that Jesus demonstrated in his own life. Many of us want an accepting Savior-Jesus and not a Lord-Jesus. Yet salvation is so much more than something that happens at the end of time. Salvation is also a gift found when we follow Jesus away from the things that caused our messes in the first place.

So we shouldn't be surprised when we see Jesus ask a sickly man, "Do you want to get well?" (John 5:6). The man quickly lets Jesus know it was his fault for not being well sooner: "I don't have anyone to put in when the water is stirred and others get in ahead of me" (John 5:7). Yes, Jesus was interested in the man's problems, but one of the man's biggest problems was not taking responsibility for himself — he had slipped into the victims perspective of life and was ready for others to have to deal with those consequences and not himself. This is revealed when Jesus warns him about not sinning because of the dire consequences, yet the man turns right around and turns Jesus into the authorities (John 5:14-15). Jesus wanted to truly help the man overcome his physical problems as well as his life problems. The man seemed fine with the physical healing: unfortunately, he wasn't ready for the emotional and social challenges of becoming fully whole.

I don't want to leave people struggling in their old way of life that sucks them back into a life a sin.
We see similar things other places in Jesus' ministry. In the next chapter, Jesus confronts the crowd who wants to see more miracles. He lets them know that they are following him because they want another miraculous picnic like the feeding of the 5,000 the day before (John 6:22-26). They hadn't seen the sign the day before and believed: they just wanted a miracle working King who could dazzle them and thrown off the Romans as their oppressors (John 6:15). Jesus challenged them with a hard teaching and most turned away from following him (John 6:59-66).

Even in one of the most beloved stories of Jesus' gracious acceptance of a sinner (John 8:1-11), we find Jesus calling the person away from her sin and toward a life of holiness. The story of the woman caught in the very act of adultery reaches its powerful conclusion with these words:

They were trying to trap him into saying something they could use against him, but Jesus stooped down and wrote in the dust with his finger. They kept demanding an answer, so he stood up again and said, "All right, but let the one who has never sinned throw the first stone!" Then he stooped down again and wrote in the dust.When the accusers heard this, they slipped away one by one, beginning with the oldest, until only Jesus was left in the middle of the crowd with the woman. Then Jesus stood up again and said to the woman, "Where are your accusers? Didn't even one of them condemn you?""No, Lord," she said.And Jesus said, "Neither do I. Go and sin no more" (John 8:6-11 NLT).

Finding the balance of grace and obedience is not easy. We are to accept others and compassionately forgive others as we have been accepted and compassionately forgiven (Romans 15:7;  Ephesians 4:32). Yet we are also to call each other to love, good deeds, and obedient holy living (Hebrews 10:24-25; 1 Thessalonians 4:1-8). If Fred Rogers was more than the humorous caricature of Mr. Rogers, then we've got to follow a Jesus who is more than Mr. Rogers. Jesus is more than warm fuzzies and sweet words.

We've got to passionately reach out to others and let them know they are loved and welcomed by Jesus. We also have to commit to walk patiently and lovingly beside those precious people as they seek to be conformed to Jesus. This will take time.

I never want to be the person who casts the first stone as someone struggling to honor God — I'm not sinless and any claim to be would be pretentious and self-righteous. But I don't want to leave people struggling in their old way of life that sucks them back into a life a sin. As Paul says so eloquently, this is not the message of Christ we hear in Scripture:

And so I insist — and God backs me up on this — that there be no going along with the crowd, the empty-headed, mindless crowd. They've refused for so long to deal with God that they've lost touch not only with God but with reality itself. They can't think straight anymore. Feeling no pain, they let themselves go in sexual obsession, addicted to every sort of perversion.But that's no life for you. You learned Christ! My assumption is that you have paid careful attention to him, been well instructed in the truth precisely as we have it in Jesus. Since, then, we do not have the excuse of ignorance, everything — and I do mean everything — connected with that old way of life has to go. It's rotten through and through. Get rid of it! And then take on an entirely new way of life — a God-fashioned life, a life renewed from the inside and working itself into your conduct as God accurately reproduces his character in you (Ephesians 4:17-23 MSG).

"More than Mr. Rogers" by Phil Ware is licensed under a Creative Commons License. Heartlight encourages you to share this material with others in church bulletins, personal emails, and other non-commercial uses. Please see our Usage Guidelines for more information.