Get Your Head Out of the Clouds!

Move beyond resolutions to Kingdom living! 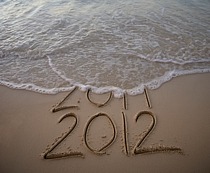 by Phil Ware (01/01/2012) | Two Minute Meditations
We begin the New Year with the same ol' hype, same ol' commercials in different dress, and if we are not careful, the same ol' resolutions as last year, and the year before, and ... well, you get the picture. It can easily become a game and we can play the game as easily in our life of faith as we can anywhere else.

We probably have a right to be cynical. Experts say that the past is the best predictor of the future, so here we go again with all sorts of good intentions knowing we'll end up in the same place ... so why play the game?

But then there are those exceptions. Like that rag-tag bunch of nobodies that Jesus chose — those average nothings (in the eyes of the world) that Jesus chose to be his apostles. And when Jesus was with them, let's be honest, they weren't much better than they were before Jesus stepped into their lives. Then at the end of his life, when things got close to the Cross, they were worse. They ended up broken because of their own betrayal, denial, and abandonment of the very one they considered their teacher, Lord, Savior, and friend.

Thankfully the story doesn't end. Jesus stepped in again, raised from the dead, and things were better ... a lot better. These average men and women were better after being broken. Maybe it was because they were forced to realize that what they couldn't, he could; and that what they wouldn't, he would; and when they said, "We can't!" he showed them "You can!"

Luke tells us this amazing story in the book of Acts. But he doesn't tell it so that we can admire them or revere them or recite their mighty deeds. Nope, Luke writes this story so that we, too, can know that we are better broken — God's grace and sufficiency show themselves in our weakness (2 Corinthians 12:9)! And that's good, because at some point in time and at some place in our lives, we've all been deeply broken ... or we will be. It's the inescapable reality of our human existence.

So when we are better after being broken, then we are ready for Jesus to continue his story in us — not for our glory and not even as our story, but as His story lived out in us. Luke hints at this in the very first verse of Acts:

In my former book, Theophilus, I wrote about all that Jesus began to do and to teach … (Acts 1:1 NIV).

That means that our lives mean something, they matter, and God uses them for more than just occupying space and breathing air and taking up a green footprint on this little blue planet. History, or better yet, His-story, comes alive in us!

But here's the rub. We have a tendency to read the book of Acts and put what I call the "Big Woo!" on what we read. The "Big Woo!" is this perspective we get when we see God doing great things through people who lived out the Bible's story and we think, "Yeah, but they are Biblical characters and God doesn't do that kind of stuff today through ordinary folks like me.

I'm not sure how all of that started, maybe it was a well-intentioned theological position of some folks, but it's sad. It's sad because it lets us off the hook for investing our lives and setting our hopes on the power of the Holy Spirit Jesus longs to release in us to bless the world through us. We become a society for the study of ancient history about what God used to do instead of being the Kingdom people of God through whom God is doing what Jesus promised he would do:

Very truly I tell you, whoever believes in me will do the works I have been doing, and they will do even greater things than these, because I am going to the Father (John 14:12).

Sadly, we can become like the people of Jesus' hometown who would not believe in him and Mark tells:

He could not do any miracles there, except lay his hands on a few sick people and heal them. He was amazed at their lack of faith (Mark 6:5-6).

So the angel's words to the band of amazed followers left standing on the mountain are also an important message to you and to me:

"Get your head out of the clouds!"
Instead of reading the Bible for facts, let's read it for focus: what God longed to do for them and through them, he longs to do for us and through us. Instead of imagining what it was like, let's believe what can be. Instead of praying for blessings, let's pray for boldness. Instead of praising God for what he did long ago, let's rejoice in what God is doing in his unfolding power and grace in our time.

The prophet Habakkuk prays a prayer I hope you will join me in praying as we journey through the book of Acts these next few weeks.

LORD, I have heard of your fame;
I stand in awe of your deeds, LORD.
Repeat them in our day,
in our time make them known
(Habakkuk 3:2).

Let's pray Habakkuk's prayer as we begin this New Year and let's trust that God has "immeasurably more than we can ask or imagine" (Ephesians 3:21) in store. And as we pray it, let's hear the angels tell us to get our heads out of the clouds and get busy doing the Kingdom work of God!

As you begin the New Year, check out two new resources for your walk with the Lord:

"Get Your Head Out of the Clouds!" by Phil Ware is licensed under a Creative Commons License. Heartlight encourages you to share this material with others in church bulletins, personal emails, and other non-commercial uses. Please see our Usage Guidelines for more information.