What does this last glimpse of Mary teach us about Jesus and discipleship? 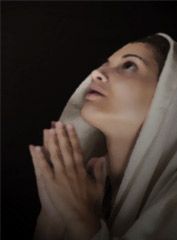 by Phil Ware (05/26/2011) | Two Minute Meditations
Part of me wishes I could have been alive and seen Jesus face-to-face in his earthly ministry. The idealistic part of me wonders what his miracles looked like when he did the impossible (How in the world did he make 5+2=5000 when he fed the masses with a few loaves and fish and how did he walk on the raging waters of the Sea of Galilee?) The introspective part of me wonders if I would have believed in Jesus before his death and resurrection, or if I would have been like the religious folks whom he irritated and who later put him to death? The people-watcher in me really wonders how the family of Jesus worked, since his mom knew this incredible secret about her son and his siblings tried to figure out their weird brother!

The last few times we hear about Mary intrigue me. So much of a conversation involves the tone of what is said and the body language used when it is said. So I would love to have been there when the following dialogue took place:

As Jesus was saying these things, a woman in the crowd called out, "Blessed is the mother who gave you birth and nursed you."

He replied, "Blessed rather are those who hear the word of God and obey it"

Mary is called "highly favored" by the angel (Luke 1:28) and "blessed" by Elizabeth (Luke 1:42). And the woman in the crowd is simply voicing what many must have thought over the centuries in anticipation of the Messiah: "To be the mother of the Lord's Messiah, our Savior and Deliverer, would be a great blessing, indeed!"

However, Jesus didn't let the focus rest upon Mary, but instead points the focus to obedience of the will of God and the blessing there for all of us! This is not a rebuke of the woman who said these words of admiration for Mary. It is not a rebuke of Mary as God's specially chosen one to be the mother of the Messiah. However, it is a reminder that the greatest blessing we received from Mary is that she always points us to Jesus! The focus of God's story is not her, but her on her son and her Savior, who happens to be our Lord.

Nowhere is this more powerfully emphasized than in our last direct glimpse* of Mary in the New Testament. Jesus has been crucified and raised from the dead. Before Jesus ascended back to the Father, he directed his followers to stay in Jerusalem and wait for power from on high, the gift the Father had promised them, the Holy Spirit (Acts1:1-4). So the apostles and closest followers of Jesus went back to Jerusalem and gathered in an upper room to pray. Luke describes the situation with these words:

They all joined together constantly in prayer, along with the women and Mary the mother of Jesus, and with his brothers (Acts 1:14).

In this final glimpse of Mary, we see her gathered with the other disciples in prayer, along with Jesus' brothers. They are not held up as uniquely special or important in this group. In fact, they are mentioned quite simply. We know that Jesus' brothers had not believed in him during his ministry, but apparently after his resurrection, they became his followers and joined Mary in doing what Jesus had commanded. Jesus was no longer primarily her son: he was now her Messiah. He was no longer their brother; he was their Lord!

Mary had now completed the glorious, and yet sometimes torturous, journey from mother to disciple:

All along this journey we are invited to share in the wonder of God made flesh in Jesus.

All along this journey we are invited to share in the wonder of God made flesh in Jesus. We see this wonder through the eyes and actions of Mary. We are amazed because Mary always leads us to Jesus — the real Jesus. And now as we gaze through this last window, we learn the greatest wonder of all: if we will join Mary in following Jesus, we can be part of Jesus' forever family, too!

* While this is the last specific mention of Mary, Mary's influence is felt and seen when you compare the magnificat and much of the teaching of Jesus, and later, Jesus' brother James — as mentioned in an earlier message in this series, see http://hlt.me/iWOdzE. In addition, Mary quite possibly furnishes the historical information on much of Luke chapters 1 and 2 as well as John chapter 2 and some other glimpses of Jesus in the gospels as treasures all these events in her heart (Luke 2:19 and  Luke 2:51).

"Last Glimpse?" by Phil Ware is licensed under a Creative Commons License. Heartlight encourages you to share this material with others in church bulletins, personal emails, and other non-commercial uses. Please see our Usage Guidelines for more information.

ToGather.church for Sunday Is Ready!
You're Invited!

Who Do You Say I Am?
At a place with great spiritual and physical significance, Jesus challenged his followers to decide about his identity.

Lord, Teach Us to Pray: Abba Father
How do we combine both reverence and familiarity, respect and intimacy?

Sowing to the Spirit: Finding Power from on High
We can trust God's promises that the Spirit is at work in us!

He Came to a World We Know
Jesus entered a world we recognize as our own. He did it to redeem us from the messes we have brought on ourselves.

Come Home Quickly, Hallelujah
I know my heavenly Father is looking forward to having me home to enjoy the celebration with him and his other children.