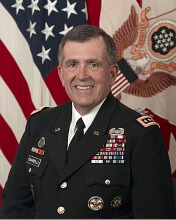 by Rubel Shelly (04/11/2011) | Leading in Hope
One of the things you have probably noticed too is that small-minded people are jumpy, insecure, and unsure of themselves. Thus they get their feelings hurt easily, tend to be condescending, and — when in position to do so — seem to take a perverse delight in putting others down or humiliating them.

Several news outlets have carried the story of an awkward moment between White House adviser Valerie Jarrett and the second-ranking general in the United States Army. It took place at a White House dinner where both were guests.

Four-star General Peter Chiarelli happened to be walking by the table at which Ms. Jarrett was seated. Seeing only the striped pants of his dress uniform, she made the mistake of thinking he was a waiter — and asked him to get her a glass of wine. Uh, did I say earlier that this was the story of an "awkward moment"? It takes very little imagination to imagine what might have happened at that self-conscious juncture! Chagrin? Rebuke? Embarrassment?

Instead, this is what transpired. The general smiled, walked away briefly, and came back with the glass of wine that had been requested. Advised of her blunder during his brief absence, Ms. Jarrett began to apologize with a red face and an acute sense of needing to set the matter right. With secure good humor and in order to defuse her discomfort, Gen. Chiarelli dismissed her honest mistake and invited her to a meal at his home.

"It was an honest mistake that anyone could have made," the General told a CNN reporter who questioned him about the gaffe. "She was sitting. I was standing and walking behind her, and all she saw were the two stripes on my pants — which were almost identical to the waiters' pants, really. She apologized and will come to the house for dinner, if a date can be worked out in March."

You learn a lot about a mom or dad whose awkward toddler spills milk at the table or a boss whose employee spills milk of another kind in the office or plant. The one whose anxious concern is her own embarrassment may smack the kid or berate the worker; the one whose mature reaction is to be concerned for the child or flummoxed member of her staff will seize upon a way to defuse the potential for humiliation and move through it without damage to the other.

Serve each other in humility, for "God opposes the proud but favors the humble" (1 Peter 5:5 NLT).

"Overcoming Blunders with Grace" by Rubel Shelly is licensed under a Creative Commons License. Heartlight encourages you to share this material with others in church bulletins, personal emails, and other non-commercial uses. Please see our Usage Guidelines for more information.