How can we do it when it is often so hard? 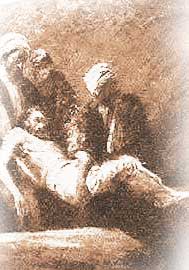 by Phil Ware (02/24/2011) | Two Minute Meditations
What he was doing was crazy — sheer lunacy and extremely dangerous. Coming at night to claim the dead body of someone executed as a dangerous criminal by the political powers of two governments was risky. To be identified with the enemy of the religious leaders who are your friends was nuts.

Yet that is where Nic was, risking everything, ruining his influence, and depriving himself of the important role he should play as a key leader the next day at the big celebration. Plus, he was undermining his important role as the leader of his family in the special meal the next night. Yet somehow, Nic felt compelled to do it. Seeing everything he had seen over the last ten days, he couldn't help himself. He was drawn to do it. His love for Christ compelled him:

Later, Joseph of Arimathea asked Pilate for the body of Jesus. Now Joseph was a disciple of Jesus, but secretly because he feared the Jewish leaders. With Pilate's permission, he came and took the body away. He was accompanied by Nicodemus, the man who earlier had visited Jesus at night. Nicodemus brought a mixture of myrrh and aloes, about seventy-five pounds. Taking Jesus' body, the two of them wrapped it, with the spices, in strips of linen. This was in accordance with Jewish burial customs. At the place where Jesus was crucified, there was a garden, and in the garden a new tomb, in which no one had ever been laid. Because it was the Jewish day of Preparation and since the tomb was nearby, they laid Jesus there (John 19:38-41 TNIV).

There in the dark shadows of despair and loss, Nic and Joseph did the unthinkable. They made themselves unclean for the Passover celebration the next day by handling Jesus' dead body. They were doing the work of a slave or of a powerless woman in the household. Yet they were rich and influential. Nic was highly respected as a great teacher, a leading Pharisee, and a member of the Jewish ruling council, the Sanhedrin. And he was throwing it all away by identifying himself as a friend and follower of Jesus of Nazareth, a criminal executed for capital offenses against the Roman government and for sins against the Temple of the Jews.

Nicodemus was the best that religion had to offer. He had come to Jesus at night, wanting to know more about who he was and what he taught (John 3:1-21). Jesus had challenged Nic with the idea that he had to be born again — born from above, born of water and the Spirit by God himself! Nic hadn't really understood at the time. He was still trying to figure out who Jesus was in his head.

"Rabbi, we know that you are a teacher who has come from God. For no one could perform the signs you are doing if God were not with him" (John 3:2).

Jesus had told him that there would be a time when he would be exalted — lifted up and glorified by God, but not in the way Nicodemus might think (John 3:13-15). There would be special power in this event that would open Nic's heart in ways he could never imagine and he would be drawn to follow Jesus (John 12:32).

So here Nic was, tenderly caring for the bloody, battered, beaten, punctured, and mutilated body of Jesus.
And this is what had happened. The events of the cross, when Jesus was lifted up, had changed Nicodemus' interest in Jesus from a head concern to a heart concern. And once Nic's heart was touched, his hands had to do something to help. Love for Christ compelled him to do it!

So here Nic was, tenderly caring for the bloody, battered, beaten, punctured, and mutilated body of Jesus. Just as Mary had once wrapped Jesus in strips of cloth at his birth, Nic carefully wrapped strips of cloth around Jesus at his death. All of Jesus' closest followers are gone — locked in a room in hiding except for a few faithful women carefully watching from the shadows.

Nic and Joseph were doing the loving and horrifying work of caring for Jesus' body ravaged by scourging that ripped open his back, being beaten with rods, spat upon, scalp punctured by the crown of thorns, hands and feet ripped and torn by the nails that held him to the cross, and his side ripped open by a soldier's spear.

And why would Nic, along with Joseph of Arimathea, risk everything to do this selfless ministry to a dead man? Because when their understanding of Jesus moved from their head ("You are a teacher come from God!") to their heart ("For God so loved us that he gave his one and only Son!"), they had to respond by ministering selflessly with their hands!

So what about us? How can we not minister selflessly? If we know who Jesus is in our heads, and we understand in our hearts the price he paid to ransom us from sin and death, then how can we not share his love with others with our hands?

The answer is clear: we can't! We must MINISTER_selflessly!

"Minister Selflessly" by Phil Ware is licensed under a Creative Commons License. Heartlight encourages you to share this material with others in church bulletins, personal emails, and other non-commercial uses. Please see our Usage Guidelines for more information.